The Peerless was on his way in to the Nation’s Capital this morning, and he dropped in on the Caps practice to see who was skating and who wasn’t. The boys were already on the ice going through their drills when we got there, and it certainly was entertaining. 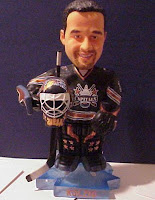 It is heartening to see that Olaf Kolzig is in mid-season form in the "@#%&" department. Having been abused by Viktor Kozlov a couple of times on shots, Mt. Kolzig erupted in a display of expletive-laden commentary on his performance that made The Peerless really wish he had an audio recorder. It wasn’t Vesuvian, but it made for fine theater, nonetheless. Trouble is, Kozlov continued to send pucks flying past Kolzig, although Kolzig started to get the upper hand as the practice was winding down.

Kolzig also had some kind words – offered often – for Brooks Laich, who had a devil of a time trying to beat the goalie. After one frustrated effort on which Laich (who was paired with Kozlov on a 2-on-2 drill) failed to score, Kolzig shouted after him as he skated away that it might be helpful to “watch and learn,” perhaps a reference to what Kozlov was doing.

Even Daren Machesney got into the act with his own @$#! as a puck slithered through his pads. It wasn't of the sort of decibel level one would associate with Kolzig, but it was a fine effort, nonetheless. We gave it a "6" on the Kolzig "@#%$-o-meter."

Boyd Gordon had an especially nifty score that drew ooh’s and aah’s from the fans in the stands. And he had more luck than most in the tip drill getting pucks on net.
Posted by The Peerless at 12:54 PM 2 comments:

And, for the Lightning...

According to he Lightning Insider, this is the lineup the Caps will face tonight:

Johan Holmqvist
Karri Ramo
Posted by The Peerless at 12:41 PM No comments:

Sasha Pokulok and Tyler Sloan were sent to Hershey yesterday, and there are two points to be made here.

First, we think this reflects progress for Pokulok, who has had a rough go of it, physically, since he was drafted by the club. His development has been stunted to a large degree, and one hopes that a full and healthy season in Hershey gets the youngster back on track. Although he's a first round pick, he's an underdog of sorts worth rooting for.

The second point is this...the Caps now have ten defensemen left in camp. One might conclude that nine of them have a legitimate shot at a roster spot (we would think that Jame Pollock will, at some point, be heading up to Hershey). It's likely that in this game of musical roster spots, one or two will find themselves on the outside, looking in. While there are options, in terms of who among this group could be sent to Hershey (Jeff Schultz, for example), there is quite a crowd looking to make the Caps' decisions difficult. This situation would have been hard to imagine just a couple of years ago.

Among the "locks" for spots, we see:

The other five are a mix of those who could be sent down or moved:

In any case, one or two of this quintet -- depending on how many defensemen the Caps choose to carry -- will not be with the Caps on opening night.
Posted by The Peerless at 8:45 AM 3 comments: