We have looked at seven goals from seven different players in our look at memorable goals scored in the history of the Washington Capitals franchise.  For the eighth goal we look at an eighth different player, a player making good on the investment made in him as a free agent. 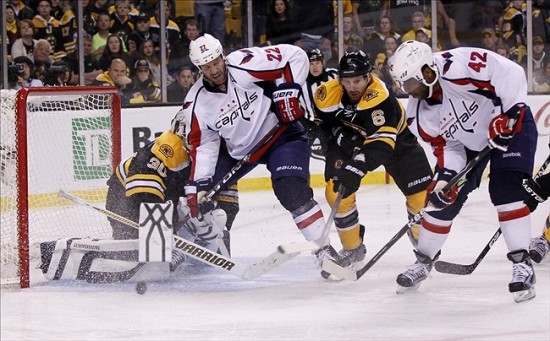 Joel Ward was a late bloomer.  An undrafted forward out of the Owen Sound Platers of the Ontario Hockey League, Ward completed four seasons in Canadian Junior with the Platers, then took the Canadian Interuniversity Sports route, playing for four seasons with the University of Prince Edward Island Panthers.  He did not sign his first professional contract, that with the Houston Aeros of the American Hockey League, until two days after his 25th birthday.  He did not play in his first NHL game until he was two weeks past his 26th birthday.  He did not score his first NHL goal until he was within two months of his 28th birthday.

It was the profile of a singularly determined individual whose resume did not suggest he would have a long and productive career in the NHL.  However, in three full seasons with the Nashville Predators (after a brief stint with the Minnesota Wild), Ward appeared in 230 games, recording 40 goals and 98 points.  More than that, he became a clutch postseason performer, especially in the 2010-2011 season when he scored seven goals in 12 games for the Predators.

It was that 2011 postseason that appeared to get the attention of the Caps, who signed the now 30-year old Ward to a four-year/$12 million in July 2011.  Ward got off to a decent start with his new club with four goals in his first dozen games with the Caps.  But then he went 25 straight games without one.  Over those 25 games the Caps fell from first in the Southeast Division and third in the Eastern Conference standings to second in the division and seventh in the conference.

Ward’s slump did not end with that goal on January 7th to break his 25-game drought.  After scoring against the San Jose Sharks, he went another 21 games without a goal, scoring what would be his last goal of the season on February 24th against Montreal.  All in all, it was part of a long slow end to the regular season for Ward that saw him finish with only six goals in 73 games.

Things really did not go a lot better for Ward as the first round series against the defending Stanley Cup champion Boston Bruins began.  He did not score a goal in any of the first six games, shooting blanks on just eight shots in those six contests.  Heading into a deciding Game 7 of that series, Ward had a total of two goals on his last 75 shots over 67 regular season and playoff games.  And, in the six games against the Bruins in the first round, he was down to averaging less than ten minutes of ice time per game after averaging 12:26 a game in the regular season.

Through three periods of Game 7 in Boston, the Caps and Bruins played an inspired and hard-fought 60 minutes.  The Caps opened the scoring mid-way through the first period on a fine play by Matt Hendricks.  As Boston was trying to exit their zone, Hendricks was skating hard up the middle to provide defensive support.  Milan Lucic had his pocket picked along the wall by Jason Chimera, and Hendricks curled back to head to the front of the net.  Chimera sent the puck back up the wall to John Carlson at the right point.  As Carlson wound up for the shot, Hendricks was positioning himself in the line of the shot.  Carlson let fly, and Hendricks barely had time to spin around to attempt a redirection.  He managed just fine, altering the path of the puck just enough for it to sail past Bruin goalie Tim Thomas’ right shoulder to give the Caps a 1-0 lead.

Tyler Seguin tied the game for the Bruins mid-way through the second period when his shot slithered through goalie Braden Holtby and crawled over the goal line before either John Carlson or Karl Alzner could sweep it out of the paint. Thomas and Holtby would keep their nets clean thereafter, Holtby finishing regulation stopping 31 of 32 shots and Thomas turning away 24 of 25 shots.

For the Caps it meant facing their fourth Game 7 overtime in club history.  They lost their first, a four-overtime defeat at the hands of the New York Islanders in the 1987 “Easter Epic.”  In 1988 the Caps evened their record in series-clinching Game 7 overtime wins, Dale Hunter breaking in alone on Philadelphia Flyer goalie Ron Hextall to score the game-winner in a 5-4 overtime win.  The Flyers returned the favor in 1988, Joffrey Lupul scoring a power play goal six minutes into overtime in Game 7 to eliminate the Caps.

This was the Caps’ first Game 7 overtime on the road, and prevailing over the defending NHL champion would be no easy task.  The extra session opened with the clubs doing some early feeling out, Boston recording one shot on goal in the first two minutes, as did the Caps.  Then, with 2:48 gone in the period, the Bruins tried to get a line change.  Benoit Pouliot circled through the neutral zone until he found himself with the puck in front of the Bruins’ bench.  He fired the puck in to gain time to complete the line change, but the puck struck Mike Knuble in the shin pads and rebounded back into the neutral zone.  Knuble took advantage of the confusion at the Bruins’ bench to jump on the puck and head up ice with Ward on his right, Greg Zanon back for the Bruins and Pouilot trying to run down Knuble.  As Knuble closed on the net, Ward curled to his left and crossed behind Knuble, just as the latter was trying to finish the play on goalie Tim Thomas.  The puck was blocked but Ward was in perfect position for the rebound.  With Knuble and a pair of Bruins churning the water in front of Thomas, Ward backhanded the puck through and into the back of the net, sending the Caps into a celebration on the ice and a second round matchup against the New York Rangers.

For Ward it was his tenth career playoff goal in his 25th career playoff game and his second game winner.  If you count the first 60 minutes of hockey in Game 7 as a complete hockey game, the goal broke a 20-game streak for Ward without one dating back to the February 24th game against Montreal.  But the goal was consistent with Ward’s 2011-2012 profile in one respect.  He had only six goals in the regular season, yes, but four of them were third period tallies.  And while he had only those six regular season goals, it was the postseason record Ward assembled in Nashville that made him a target of the Caps in free agency.  Here, in what could have been the season’s final game for the Caps, Ward made good on that investment made by the Caps in the previous summer.  It made for one of the most memorable goals in the history of the Washington Capitals’ franchise.

Photo: Greg M. Cooper/US Presswire
Posted by The Peerless at 8:00 PM No comments: