Will the last Russian please turn out the lights...

First, Sergei Fedorov is described as possibly headed to Mettalurg Magnitogorsk. Now, a report that Viktor Kozlov has signed a contract to play with Salavat Yulaev Ufa in the Kontinental Hockey League in Russia.
In two seasons with the Caps, Kozlov played in 148 regular season games, going 29-66-95, +19. In 21 playoff games with Washington over the past two seasons, he was 4-5-9, +1.
Is it true? Hey, who knows?
Posted by The Peerless at 12:06 PM 3 comments:

TSN.ca reports (via RDS.ca) that Washington Capitals center Sergei Fedorov is set to forego re-signing with the Caps to take a two-year deal with Mettalurg Magnitogorsk in Russia's Kontinental Hockey League.
The deal is reported to pay Fedorov $3.8 million per year (he earned $4.0 million with the Caps this past season) and has the added benefit of allowing Fedorov to play with his younger brothers, Fedor, who played 18 games in the NHL with the Vancouver Canucks and New York Rangers (he last played in the NHL in the 2005-2006 season), and Evgeny, a former seventh round draft pick of the Los Angeles Kings (he did not play in the NHL).

Of course, the report should be taken with a grain of salt, because: a) it is based on Russian sources (not always reliable), and b) it contradicts this report from Ryan O'Halloran over at the Washington Times just ten days ago indicating Fedorov's desire to return to the Capitals. 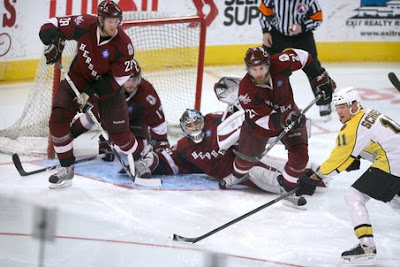 It was Penguin...
...then Bruin...
...now, Moose.
Moose is not generally a dessert course, but it'll do. The Manitoba Moose closed out the Houston Aeros last night, 3-1, to win the AHL Western Conference series, four games to two. So now, we know who the opponent will be for the Hershey Bears in the Calder Cup finals. The Bears roared back with four straight wins after dropping the opener in the Eastern Conference final, the last victory being a 5-2 win in Providence to end the Bruins' season, four games to one.

The schedule for the Calder Cup final is out, for those of you thinking of a trip up to Hershey.
Games three, four, and five will be played in Hershey on June 6 (Sat.), June 7 (Sun.), and June 9 (Tues.). The teams have not met this season.