The Peerless Prognosticator is ON THE AIR!!! -- Game 62: Washington Capitals at New York Rangers, February 28th

Twas the night before the deadline, when all through the office
All the creatures were stirring, with a plan that was flawless
The phones were all prepped, their batteries filled
In hopes that the deals would leave Caps fans thrilled…

And here we are, the annual rite of the NHL trading deadline, anticipated for weeks, watched by many, and seldom worth all the hype.  But before the deadline comes to pass at 3:00 PM (Eastern) on Wednesday, the Washington Capitals have business to take care of on the ice.  The Caps will visit the New York Rangers at Madison Square Garden on Tuesday night to try and avenge their 2-1 loss on February 19th.  The Caps are 2-1-0 since that meeting, maintaining a five-point lead on the rest of the Eastern Conference, while the Rangers are 2-1-1 since that meeting and occupy the first wild-card spot in the East.

The sparse offense has place pressure on the goaltenders, and that means Henrik Lundqvist, who went 1-1-1 in the three games in which he appeared since he earned the win against the Caps.  The 2.53 goals against average and the .908 save percentage in those three games is deceptive.  He allowed five goals on 26 shots in a 5-2 loss to the Columbus Blue Jackets on Sunday.  Columbus is a team Lundqvist has had trouble with this season, going 1-2-0 (one no-decision), 4.44, .853.  Until that roughing up by Columbus, Lundqvist was 6-1-1, 2.25, .934 (one no-decision) in his previous nine appearances on home ice, including a 31-save win against the Caps in the 2-1 win nine days ago.  Lundqvist is 21-9-4, 2.58, .909, with four shutouts in 34 career appearances against the Caps.

That Rick Nash is one of two players with two goals over the last four games since facing the Caps should not be surprising.  Since he came into the league in 2002-2003, Nash is fourth among active players in total goals scored (411).  He is not the goal scorer he once was, but his 18 goals in 50 games this season eclipses the 15 in 60 games he had last year.  The odd part of his goal scoring is its relevance.  After the Rangers scored wins in the first six games in which Nash scored goals this season, they are just 6-5-1 in the dozen games since in which he scored a goal.  He does have goal in his last two home games, although both came in losses (one in a Gimmick to Montreal), and he has three goals in his last four home contests.  Nash is 13-12-25, plus-3, in 24 career games against the Caps.

The other two-goal scorer over the last four games is Oscar Lindberg, who doubled his 2016-2017 goal output with the pair of goals.  The four goals he has this season (4-9-13, minus-1) is something of a disappointment coming off last year’s 13-15-28, plus-12 rookie season.  He has had one of those odd sophomore seasons that have their difficulty reflected in ice time.  Six times this season he skated more than 14 minutes, and in those games went 1-3-4, plus-4, with 15 shots on goal, the team going 4-2-0.  He also has six games in which he skated fewer than eight minutes, going 1-0-1, plus-1, with just three shots on goal, the team going 2-3-1.  Perhaps there is the issue of maintaining a level of intensity that has not completely settled into his game yet.  Lindberg is 2-1-3, plus-4, in six career games against the Caps. 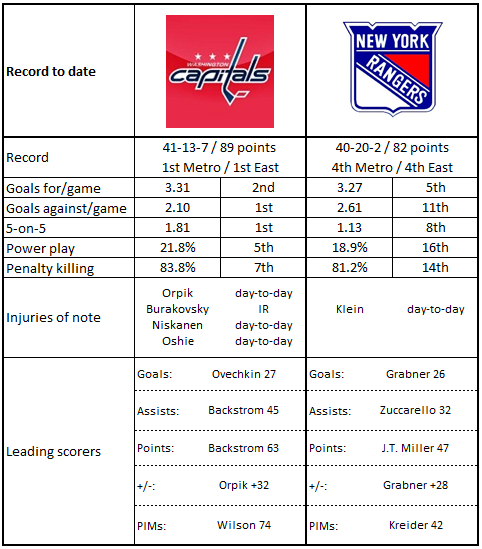 2.  Win as they might, the Rangers’ power play has been awful in the 2017 portion of the season.  At 10.2 percent since January 1st, they have the worst power play in the East in that span.  They also have the fewest chances (59).

4. The Rangers have won their share of “coin-flip” games.  They are tied with Calgary for the top winning percentage in one-goal games this season (.667/18-7-2).  Only Chicago has won more one-goal games (20).

5.  If the Rangers are winning, and they are, they are not doing it by being wizards at possession.  They rank 22nd in the league in Corsi-for at 5-on-5, adjusted for score, zone, and venue (48.36 percent; numbers from Corsica.hockey).

2.  The penalty kill could use some work.  The Caps rank just 18th in the league in penalty killing since January 1st (79.3 percent).

3.  The Caps have had 19 different goal scorers in the 2017 portion of the schedule, led by T.J. Oshie (13).  The only Capital to appear in more than three games and not have a goal is defenseman Brooks Orpik

4.  That Alex Ovechkin would lead the team in shots on goal since January 1st (83) is no surprise, but having two defensemen among the top four might be.  John Carlson is third (52), and Matt Niskanen is tied for fourth (49, with Justin Williams).

5.  Washington has the worst penalty differential at 5-on-5 in road games in the NHL (minus-26; numbers from Corsica.hockey).

As rookie seasons go, Jimmy Vesey’s came relatively easily at the start.  In 38 games of the 2016 portion of the season he ranked third among rookies in goals scored (11), trailing only Auston Matthews (18) and Patrik Laine (19).  He ranked eighth in total points (19).  The 2017 portion of the season has been a different matter.  In 23 games since the start of the new year, Vesey is 3-2-5, his three goals tied for 22nd among rookies, and his five points tied for 42nd among that cohort.  His minus-9 since January 1st is worst on the Rangers since the start of the year.  His shots are down (to 1.35 per game from 1.63 pergame), and his shooting percentage is about half of what it was, down from 17.7 percent to 9.7 percent.  His ice time is down more than a minute per game (from 14:19 to 13:04). It is all part of the learning process, even for well-regarded rookies.   In his two games against the Caps this season he is 2-0-2, plus-1.

The Caps have 20 wins in the 2017 portion of the season, tops in the league.  Thirteen different players have game-winning goals in that span.  None have more than Justin Williams, who has three game-winners among the ten goals he has since January 1st.  Only Evgeny Kuznetsov (10) and T.J. Oshie (9) have more even strength goals since January 1st than Williams (8).  And he continues to be a solid possession player, his 52.64 Corsi-for at 5-on-5 being third on the team in 2017 among players appearing in at least ten games (numbers from NHL.com).  What has been lagging all season with Williams is his road production.  He has seven goals on the road this season (tied for sixth on the club), and he is ranked eighth on the team in points on the road this season (14).  Williams is 15-13-28, plus-4, in 35 career games against the Rangers.

On the one hand, the Caps are 7-2-1 overall against Eastern Conference playoff-qualifiers since January 1st.  On the other hand, they are 3-3-3 this season against Metropolitan Division teams currently qualifying for the postseason.  Starting with this game against the Rangers, the Caps will have three more games against divisional foes currently eligible for the post-season, two against this Rangers team and one against Columbus, teams against which the Caps have a combined 1-3-1 record so far this season.  That is the kind of thing that makes this game important.  Having passed the 60-game mark, the regular season takes on a greater importance as the Caps start to measure themselves more closely against teams they might face down the line.  Having lost both of their meetings against the Rangers this season, this is not just another regular season game.