Capitals vs. Flyers: Takeaways and Throwaways from Game 5 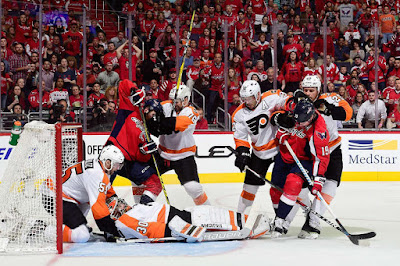 Game 5 was unkind to the Washington Capitals, who thoroughly dominated the statistics over the Philadelphia Flyers, except for, as they say, the most important one – the score, a 2-0 win for the Flyers.  While such a game has been all too common in Caps playoff history and is one that fans might be tempted to crumple up and throwaway, there are some takeaways to keep.  We can take a look at both.

There were a couple of object lessons for the Capitals in playoff games played on Saturday.  In one, there was an example of a team taking care of business in a cold, methodical fashion as the Pittsburgh Penguins eliminated the New York Rangers in rude fashion, 6-3.  In the other, the Chicago Blackhawks, facing elimination, fell behind the St. Louis Blues by a 3-1 margin after the first period, then roared back to win going away, 6-3, to force a Game 7.  One team shoveled dirt on another’s playoff hopes, the other clawed their way out of a hole to extend their own hopes.  The Caps need to find some of whatever it was that the Penguins and the Blackhawks were drinking and include it in their morning meal. 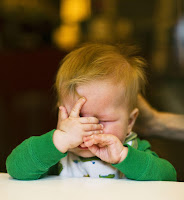 And now, the gnashing of teeth begins.

The Washington Capitals saw their once all-but-insurmountable 3-0 lead in their first round playoff series over the Philadelphia Flyers whittled to a 3-2 lead as the Flyers won Game 5, 2-0, in Washington on Friday night.

Scoring was sparse, but not the ill-will, expressing itself right off the opening faceoff when Washington’s T.J. Oshie and Philadelphia’s Braden Schenn dropped the gloves, Oshie reminding Schenn that trying to chop the knees out from under Evgeny Kuznetsov in Game 4 was remembered and something to be dealt with.

The two had been yapping at one another all through the prelude to the drop of the puck, and just ten seconds into the game they expressed their mutual distaste for one another.  We had the bout as a draw, and that is how the first period ended, the teams scoreless.

It would be the Flyers breaking the ice in the second period just as a Philadelphia power play was expiring.  Working the puck around the perimeter of the offensive zone, Sam Gagner one-timed a pass from Mark Streit at the Washington net.  The puck was deadened in front, but Ryan White – the other stick in the ribs of the Caps in this series – managed to poke the loose puck past goalie Braden Holtby to make it 1-0, 7:52 into the period.

The Flyers and goalie Michal Neuvirth made that goal stand up, and the Flyers scored an empty net goal by Chris VandeVelde with 30.8 seconds left for the final 2-0 margin

-- The Caps picked precisely the wrong time to lose consecutive games in regulation time for the first time this season.  In another way, it should not be surprising.  In 20 Games 5 on home ice in Caps history, the club is now 8-12.

-- A subplot to this series is emerging, that being which is the stronger force, Justin Williams as the clutch playoff performer or the Caps’ playoff history of misfortune.  They intersected on Friday night in the form of four minor penalties taken by Williams, three of them for high-sticking (including a double-minor barely a minute into the game) and another for goaltender interference.  Williams does not have a goal in this series (two assists, both on power plays) and is a minus-4.

-- This game was the 12th in his career that Alex Ovechkin recorded eight or more shots.  It was the sixth time he did so and failed to record a goal.

-- Game 5 was the 14th time in club history that the Caps were shut out in a postseason game, the ninth time on home ice.  It was the second time a Flyer goaltender turned the trick, the other time occurring in Game 2 of the 2008 series between the clubs when Martin Biron stopped all 24 shots in a 2-0 win in Washington.

-- The magic for Jason Chimera seems to have been spent in that 100-foot goal in Game 2.  Since that fluke goal, he has one shot on goal, none in the last three games, including Game 5 last night.

-- The Caps started this series going 8-for-17 on the power play in Games 1-3 (47.1 percent), all wins, but they are 0-for-5 over the last two games, both losses.  They now have the second-best power play in the postseason (36.4 percent, to Pittsburgh’s 36.8 percent), but how they got there has come to matter in this series.

-- Braden Holtby has faced just 35 shots over the last two games, stopping 32 of them.  A 1.52 goals against average over two games would suggest he added two wins to his record, but the opposite is true.

Well, here we are.  Holding a 3-1 lead, losing Game 5 to make it 3-2.  Talk about history not meaning anything at this point sounds like whistling past the graveyard.  More ominously, this series is now setting up to look far too much like the 2010 Eastern Conference quarterfinal against the Montreal Canadiens.  Think about it (or perhaps don’t)…Presidents Trophy winning Caps against an 8-seed that struggled to make the post season.  The Caps dominate the series early, leaving the opponents in a quandary about goaltending.  Finally, a journeyman goaltender emerges to frustrate the Capitals relentlessly, and the team in front of him plays just well enough to eke out wins despite being utterly dominated everywhere but on the scoreboard.

It was Jaroslav Halak who so frustrated the Caps in 2010.  Now, Michal Neuvirth is trying to step into that role for the Flyers in 2016.  The cruel irony of it, of course, is Neuvirth having once been a draft pick and a playoff goaltender for the Caps.

The talk of another Caps collapse in the postseason will be hard to avoid over the next 30 hours before the teams meet at high noon in Philadelphia on Sunday.  For the Caps and their fans, it will be to wonder if the 3-0 lead the club took in this series was just a different road to an inevitable destination...a Game 7 in Washington on Wednesday night.