“Sometimes it's the journey that teaches you a lot about your destination.”
-- Drake

He did this rather efficiently, having finished only 16th in average time on ice (16:52).  That rookie season suggested good things ahead for Orlov and the Capitals.

The 2012-2013 season was not nearly so kind.  After suffering a pair of concussions while playing for the Hershey Bears during the 2012 lockout, Orlov missed the Caps first 28 games of the abbreviated season, not getting into the lineup until March 5th against the Pittsburgh Penguins.  He played only five games, finishing the season with only one point.

That’s about 1,500 miles in travel.  Good thing the Caps didn’t have an AHL team in Portland, Oregon.  That November 30th recall would be Orlov’s last of the 2013-2014 season.  He played in 54 of the Caps’ 56 games after that, missing two to a suspension when he boarded Philadelphia’s Brayden Schenn into the boards on March 2nd in a 5-4 overtime loss to the Flyers.

Until Orlov’s arrival the Capitals’ defense on the second and third pairs were churning buckets of “meh.”  After his arrival, the second pair bucket stopped churning.

Orlov would spend most of his time paired with Mike Green.  Of his 962 minutes of 5-on-5 ice time Orlov spent 523 of them on Mike Green’s left, more than 350 minutes more than his next most frequent partner (Tyson Strachan, 147 minutes). 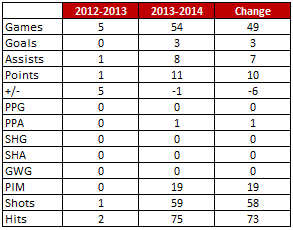 Fearless’ Take… The Caps were 25-17-12 with Orlov in the lineup, 13-13-2 without him.  He was the rare Caps player with positive possession numbers.  He was second on the team in penalties drawn to penalties taken differential (plus-6), third among defensemen in penalties drawn, despite playing only 54 games.  You get the feeling going through some of these reviews that not only did the Caps not put their best roster on the ice at times, but almost stubbornly did so.  Peerless said Steve Oleksy might not have been a difference maker, but the Caps did do better with him in the lineup than without him.  Orlov is not (yet, perhaps) a difference maker, but not every player is a difference maker.  Some are just cogs that make the machine run a little better.

Cheerless’ Take… After that two-goal game against the Flyers, cuz?  The one where he boarded Schenn…no, not that Schenn, the other Schenn... He was suspended for two games.  The Caps lost them both.  Then he went without a point for 14 straight games, was minus-5, and the Caps were 6-5-3. The Caps were eliminated from the playoffs a day after his scoring drought ended.

Odd Orlov Fact… Dmitry Orlov scored three goals this season.  All of them came against the Philadelphia Flyers, one on December 15th at Verizon Center, two on March 2nd in Philadelphia.  Both games went to extra time, both games ended in 5-4 decisions, one win for each team.

Game to Remember… December 15th versus Philadelphia.  This was the game against the Flyers in which Orlov scored a goal and DIDN’T so something suspension-worthy.  His goal came on a strange coincidence of events.  Late in the third period it looked as if the Flyers would have their way with the Caps with a 4-2 lead.  But with 3:35 left the teams lined up for a faceoff in the Philadelphia end.  Joel Ward took it after Jay Beagle was tossed from the circle.  Ward wrestled Sean Couturier to a draw and nudged the puck to Eric Fehr, who slid it back to Orlov.  From the left point Orlov let fly with a shot that barely eluded Ward’s redirect attempt and seemed to actually curve just outside goalie Steve Mason’s glove and just inside the near post to draw the Caps to within a goal.  Alex Ovechkin tied the game with 48 seconds left, and the Caps won it, 5-4, in the Gimmick.  As much as the goal was Orlov’s possession numbers.  He finished with a Corsi-for percentage of 73.1, a plus-40.5 relative to the team’s percentage for when he was off ice.  He was protected with a lot of offensive zone starts, but he took advantage of the opportunity.

Game to Forget… March 2 versus Phildelphia.  It might have been a game to remember, the game to remember for the season, except for two things.  First, after Orlov helped the Caps to a 4-2 lead, his second goal giving the Caps that lead late in the second period, Orlov took that major boarding penalty against Brayden Schenn.  Second, the Flyers halved the lead on the ensuing power play, tied the game with 1:05 left, then won the game in overtime on a Vincent Lecavalier goal.  Instead of extending a winning streak to five games – what would have been the Caps’ longest of the season – it would become the first of a three-game losing streak.

That March 2nd game aside, Orlov settled in quite well as Mike Green’s partner on the second pair.  He did not look out of place in that role.  Whether he is a second-pair defenseman on a contender is a matter yet to be settled, but this season was one to suggest that his rookie season was no fluke and that the season lost to injury in 2012-2013 was something of an aberration.  The question now will be one of what sort of upside Orlov has.  Does he continue to develop multiple facets of his game, especially on the defensive side of the puck, where the team could use some help, or is he reaching the top of his game?  After two full seasons it is hard to tell, but that will make watching him going forward quite interesting.  As for his 2013-2014 season, though, count it as a positive development.

Photo: Geoff Burke-USA Today Sports
Posted by The Peerless at 3:47 AM No comments: