Well, yes, if you’re defining “special” as a playoff team. Long ago, there was something called a “misery index.” It was the simple addition of inflation and interest rates, a simple indicator of how good or how bad things were going in our economy. Well, we can compute a similar “ecstasy index” for hockey – the addition of power play and penalty killing success rates – to indicate whether a team is doing well or poorly. And the results are, even at this early stage of the season, illuminating, if not surprising: 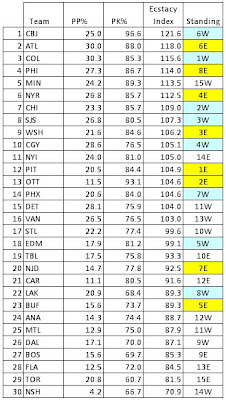 Conveniently, an ecstasy index value of “100.0” seems to be the threshold dividing good from bad, and as it turns out, playoff contender from playoff pretender. Sixteen of the 30 NHL teams have values greater than 100.0, and of this number 12 are currently in the top eight of their respective conferences (yellow in the table above for Eastern Conference teams, teal for Western Conference teams) – 12 of the top 14, in fact.

With respect to the Capitals, history can be a guide here... 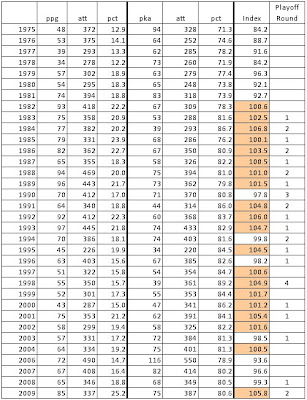 As we hinted above, there is nothing surprising in this. Teams that can take advantage of power plays and deny opponents success when they are at a disadvantage do better than teams that fail in these situations. But what it speaks to specifically with respect to the Capitals is this. We know that the power play is good. It’s 21.6 percent success rate (14th in the league) is probably a bit of a disappointment in this early going. It would seem likely that it will get better. But the other side of the index bears watching. The 84.6 percent penalty killing rate is perhaps a pleasant surprise (the Caps finished 17th last year at 80.6 percent).

A team needs to have both sides of this equation working in order to be successful. It is something we’ll try to return to from time to time as the season wears on.
Posted by The Peerless at 6:42 AM 1 comment: