"If you do not expect the unexpected you will not find it, for it is not to be reached by search or trail."
-- Heraclitus

Raise your hand if you knew in January that Washington Capitals defenseman Tomas Kundratek would record points at an 82-game pace that would be among his best seasons at any level of hockey.  Here was a fellow who was the return package in a trade of “prospects” back in 2011.  We use the quotation marks for “prospects” advisedly, considering that a trade of a disappointing youngster (Francois Bouchard) for what Caps fans might have been forgiven for thinking was little more than a warm body was not among the most newsworthy deals on the NHL ticker in November of 2011.

But here was a player who methodically rose through the tiers of Czech hockey, was drafted by the New York Rangers in the third round of the 2008 entry draft, then came to North America in 2008 to skate for the Medicine Hat Tigers in Canadian juniors.  Kundratek dutifully spent two years in Medicine Hat, then joined the Connecticut Whale in the American Hockey League.  It was in his second year in Connecticut that he got the call – the trade to the Capitals’ organization – upon which he reported to Hershey to skate with the Bears for the remainder of the 2011-2012 season.  During that season he was brought up for a cup o’ coffee – five games – with the Caps.

Fans might not have seen the trail, but Kundratek was following it with diligence.

The diligence was rewarded, even if it was the product of misfortune.  When Jack Hillen was injured in the Caps’ season opener, Kundratek was recalled from Hershey to replace him.  At the time of his recall Kundratek had already played in 41 games for the Bears, the product of the NHL’s late start to the 2013 season.  And those 41 games presented a mixed case for his promotion.  On the one hand he was 13-13-26 in those games.  On the other hand, he was a minus-13, including a minus-15 during a November in which the Bears went 6-7-0.

His elevation did not do much for his game.  In his first eight games as Hillen’s replacement he was 0-0-0, minus-5.  Then, against Toronto on February 5th, he recorded an assist – his first NHL point.  He recorded another assist in his next game against Pittsburgh.  It was the start of a stretch in which he would record four points (all assists) over five games.  He would go on to go 1-6-7, plus-3 over a 12-game stretch after his eight-game streak without a point to start his season.

At that point, Kundratek went dormant, failing to record a point in any of his next four games.  The last of those, however, showed a spark that perhaps he was coming out of the slump.  Although he did not record a point in a 4-0 loss to Carolina on March 12th, he did post a team high in shot attempts (eight) and shots on goal (five) in a career high 24:13 of ice time.

That might have been the high point.  In his next game, also against the Hurricanes, Kundratek got tangled up with Jeff Skinner on his fourth shift of the first period.  He left the contest with a leg injury, his last appearance with the Caps for the 2013 season.

It is hard to remember that Kundratek played in 25 games.  Part of that is the fact that he spent more 5-on-5 ice time with Jeff Schultz – another of the lost brigade of defensemen – than he did with any Caps defenseman except Karl Alzner.  And what a difference a partner makes.  Consider the goals against at 5-on-5.  With Alzner, the GA20 (from stats.hockeyanalysis.com) was 0.564.  When apart from Alzner, it jumped to 1.093.  A good part of that, no doubt, was his pairing with Schultz for large chunks of ice time.  Kundratek’s GA20 with Schultz was 1.715, while it was only 0.504 when not paired with Schultz.  Those are the numbers of an in-season rookie call up. 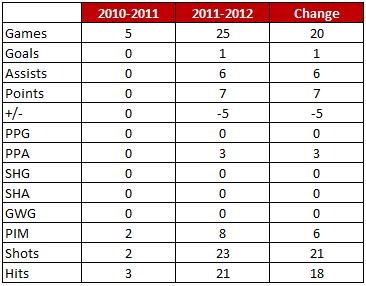 Game to Remember… March 5th vs. Boston.  Eric Fehr got the goal – a “play of the year” candidate, in fact.  But Kundratek got things started on that play, feeding Fehr skating out of the Caps’ zone, who then worked a give-and-go with Nicklas Backstrom before roofing the puck while falling to the ice for the game-winner.  Kundratek got a goal of his own in that game, one that got the Caps to within 3-2 heading into the second intermission.  He had six shot attempts (one on goal for a score), a hit, a takeaway, and a blocked shot to go with his plus-2 in 23 minutes of ice time.  It was his first and, to date, only two-point game in his brief career.

Game to Forget… March 14th vs. Carolina.  Live by the sword, die by it.  He came to the Caps as a result of an injury, and his season ended for the Caps to an injury he sustained just 7:49 into this game.

Post Season… Kundratek was 0-1-1, minus-1 in five games with Hershey.  He did not participate in Washington’s first round loss to the New York Rangers.

In the end… Tomas Kundratek had one of those seasons that fans will think of as being a stepping stone to bigger things, and it might be that.  But on the other hand, he benefited mightily from his pairing with Karl Alzner and had less success with other defensive partners.  There is also the fact that 30 games of NHL experience (25 of them this year) is not a lot to go on when making judgments about his potential for future production.

Kundratek is a restricted free agent with the end of the 2013 season, and the Caps have a fair number of guys under contract for the next season or two who might be third-pair types at the moment – John Erskine, Jack Hillen, Steve Oleksy, Cameron Schilling, Nate Schmidt, and Dmitry Orlov among them.  Is is hard to know where Kundratek falls out in this situation, but one thing he has done is followed a straight and true path to his opportunity in the NHL.  One might not expect him to break through, but then again… 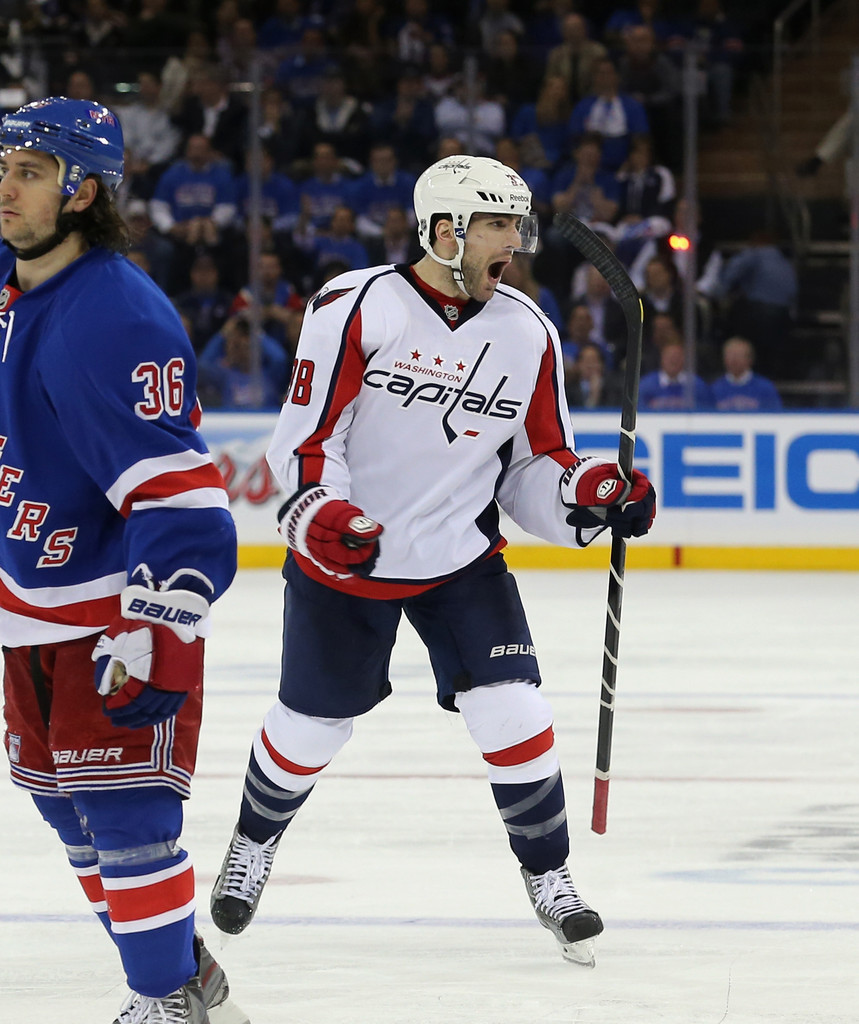 "Each man delights in the work that suits him best."
-- Homer

If you stopped a Washington Capitals fan on the street and asked him or her, “name six Capitals defensemen,” you might hear the name “Jack Hillen,” but if you did, it would not be the first one…or the second…or perhaps even the third.

What is perhaps more impressive about Hillen’s numbers is that he achieved them largely in the last ten games in which he appeared in the regular season.  His season got off to something less than an auspicious start when he lasted only 3:29 in the season opener, suffering a shoulder injury courtesy of a hit from Tampa Bay’s Vincent Lecavalier.  He missed the Caps’ next 25 games, then managed to record only one assist in 12 games after his return.

In his last ten games of the regular season, though, Hillen went 3-5-8, plus-8, while averaging 16 minutes of ice time per game.  Those last ten games reflected a change in pairings for Hillen.  Over the course of the season Hillen spent 90 percent of his 5-on-5 ice time split primarily between two players – John Carlson (53 percent) and Steve Oleksy (37 percent).  It was with Oleksy that Hillen scored all three of his goals and recorded half of his six assists for the season.

What is perhaps surprising is that among Capital defensemen having played in more than five games, Hillen had by far the best goals against/on ice per game, and only John Erskine had a better goals against/on ice per 60 minutes at 5-on-5.  He had more advantageous zone starts (only Tomas Kundratek had a higher percentage of offensive zone starts) and benefited from both better quality of teammates and lesser quality of competition (numbers from behindthenet.ca).  These factors moderate the defensive statistics somewhat, but Hillen could be credited with having taking advantage of those situations.

The “Southeast Division” effect seemed less pronounced with Hillen than with many of his teammates.  That might be as much a function of his missing 25 of the season’s first 26 games, when the Caps struggled (11-14-1 overall, 4-11-1 outside the Southeast Division).  Nevertheless, Hillen was 1-3-4, plus-7, in nine games against the Southeast and 2-3-5, plus-2, in 14 games against other Eastern Conference teams. 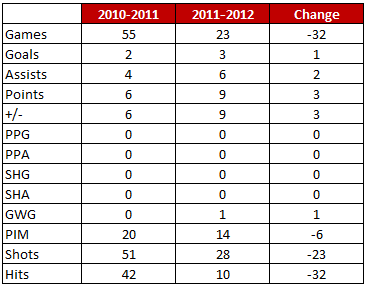 Game to Remember… April 9th vs. Montreal.  In what amounted to a “statement” game for the Caps – the Caps had gone 22 straight games without winning a game against a playoff qualifier in regulation time – Hillen assisted on the go-ahead goal and scored the game-winner himself in the Caps’ 3-2 win over the Canadiens at Bell Centre.  The two points for Hillen gave him four over two games, the first time he accomplished that feat in his career.

Game to Forget… January 19th vs. Tampa Bay.  Sure, it was a modest contract by free agency standards – a one-year deal for $650,000 – but there is still the desire to impress one’s new employers that they are getting value for their dollar.  Hillen lasted six shifts in his first game.  His first shift ended after 13 seconds when the Lightning took a penalty, and the power play unit came on for the Caps.  His second shift ended after 44 seconds when Vincent Lecavalier scored for the Lightning to make the score 2-1, Tampa Bay.  His fifth shift lasted four seconds when the Lightning took another penalty, and his sixth – and last shift for the evening – lasted 30 seconds until Lecavalier deposited Hillen into the boards, ending his night and putting him out for the next 25 games.

Post Season… In a sense the Capitals were exposed through Hillen’s production in their seven-game series against the Rangers.  He is not a shutdown defenseman, but rather one who can chip in support minutes against lesser competition among his team’s opponents and who can contribute on the offensive end.  Against the Rangers, Hillen contributed little offense – one assist and only seven shots on goal.  In one of the stranger playoff facts, Hillen was on ice for five goals against in the series, all of them in losses and three of them being game-winning goals by the Rangers.  The depth that Hillen seemed to provide in the regular season was not as evident in the series against New York.

It is hard to know what to make of Hillen’s year.  Losing more than the first half of the season to injury while trying to find a place on a new team with a new coach is not the easiest way to make a living, but Hillen produced in the second half, and especially down the stretch when his health returned.  The post-season is troubling, though.  It raises the question whether the Capitals have sufficient depth on defense.  Not the sort of depth that a 7/8 defenseman can provide in the event of injury, but whether the Caps have it on the three skating pairs.  Injury did affect the mix, primarily Dmitry Orlov losing almost the entire season to the effects of a concussion.  But while a third pair of Jack Hillen and Steve Oleksy makes a pretty good regular season story, in the merciless cauldron of playoff hockey, it can be – and was – exposed just enough to help send the Capitals packing after the first round.