In case you hadn’t noticed, Tom Poti had a pretty solid season for the Caps. And on a team that had the high-wattage offensive performance of a Mike Green, chances are that a lot of folks didn’t notice. If you look at Poti’s ten-game splits, there isn’t much of anything that leaps off the page, but that’s the point… 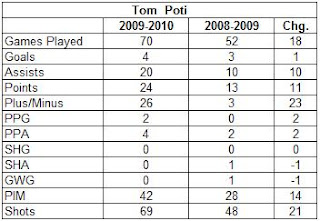 Not that you would have noticed.

Contrary to the reputation he earned earlier in his career for being somewhat (ok, very) suspect in his own end of the ice, Poti displayed a solid character in his own end. Among defensemen appearing in at least 60 games this year, Poti finished 19th in goals-against/on ice per 60 minutes at 5-on-5 (according to behindthenet.ca), which was second on the team (there’s that word again). And he did it facing superior quality of competition to any of the 18 defensemen ahead of him.

There was, however, this problem – penalty killing. On a team that struggled quite a bit on the penalty kill, Poti was no exception. At 4-on-5, Poti ranked 80th in goals against/on ice per 60 minutes among defensemen who played in at least 60 games and averaged at least two minutes of penalty killing time a game. And only three of the 11 defensemen ranked lower did it against lesser quality of competition than Poti faced.

Poti spent much of his career as a playoff no show. In his first six appearances in the post season he was 0-8-8, minus-9, in 31 games, and none of his teams made it out of the first round. The last two years, though, he has improved some in this regard (2-9-11, plus-17 in 20 games, although getting out of the first round remains elusive). This year, he had four assists and was plus-9 in six games. But more important, in the six games he played he was on the ice for only three of the 18 goals scored by the Canadiens and only one in the last three games he played in the series.

The operative term in that last sentence is “last three games he played.” Poti did not play in Game 7, having suffered a gruesome injury in Game 6 that threatened more than his capacity to play in a hockey game. Given that the Caps allowed only two goals in the decisive seventh game of the Montreal series, you can’t say that Poti’s absence was the deciding factor, but it certainly would not have hurt to have him out there. In three other Games 7 with the Caps, he was on the ice for only two goals, both in the 6-2 blowout against the Penguins last year and one of those a late garbage goal (although there was that whole overtime penalty thing against the Flyers a couple of years ago).

Poti is entering the last year of a four-year deal that pays him $3.5 million a year. Given that he will turn 34 by the end of the regular season, he will be auditioning for what could be his last big contract. He has changed his game from that of an almost exclusively offensive defenseman to a more understated two-way sort of game. He probably occupies the slot that John Carlson will someday assume (and Carlson is likely to chip in more offense when he does take over that role), so in that respect he is likely to have role-model duties in addition to his auditioning for his next contract. He could see his way clear to make it the sort of season that folks might notice. But for this one…