A Tale of Two Januarys 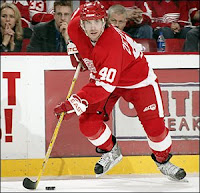 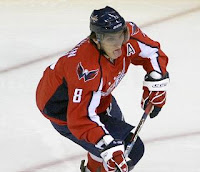 Last year, on January 10th, Alex Ovechkin signed a contract with Washington that would pay him $124 million over 13 years. How did he respond to the added pressure? He went 7-4-11, +5 in his next half dozen games, and the Caps went 4-2-0.
Henrik Zetterberg signed a 12-year, $73 million contract on Wednesday that will keep him in Detroit for a while. How did he respond to the added pressure? He sat out a 4-2 loss to Dallas as a precautionary measure after his back tightened up in the Red Wings' previous game, a 3-2 overtime loss to Columbus.
OK, that's unfair. Truth is, we wouldn't mind if Zetterberg took all the time he needed to get back to 100 percent...even if it means missing tomorrow's game.
Posted by The Peerless at 9:08 AM No comments:

Last night the New Jersey Devils leapfrogged the Washington Capitals into second place in the Eastern Conference with a 4-3 overtime win against the Boston Bruins in Boston. It was the Devils’ seventh straight win and a 60-minute example of how a team that doesn’t jump off the page, statistically, has cobbled together such a successful year despite losing a hall-of-fame goaltender to injury. How have they done it?

First…special teams opportunities. Jamie Langenbrunner opened the scoring for the Devils at the 15:01 mark with a shorthanded goal. Typical. The Devils do not often find themselves in shorthanded situations (they have the ninth fewest man-down situations in the league), and when they do, they are a threat to score. Langenbrunner’s was the seventh shorthanded tally of the year for New Jersey (tied for fifth most in the league).

What the Devils are good at on special teams is not beating themselves; they've allowed only two SH goals against in 168 power play opportunities. And, as reflected in the Langenbrunner goal, they have a talent for beating the opposition. They have seven shorthanded goals of their own in 192 man-advanatge situtations. Their ratio of power play goals allowed-to-shorthanded goals scored of 4.86 is fifth best in the league (by way of comparison, Washington’s ratio of 10.00 is tied for 15th).

Third…finding ways to win. There is perhaps no better number to look at as evidence of a team’s ability to find ways to win than looking at its record in one-goal games. New Jersey won a 4-3 overtime game last night. It put their record at 14-4-3 in one-goal games this year, good for third in the league in winning percentage (Washington is 13-5-4, good for 10th in the league).

Fourth…early pressure. The Devils idea of “early pressure” is not a high-flying offense. It is a suffocating defense. No team in the NHL has allowed fewer first period goals than the Devils – 27 (Washington has allowed the 20th fewest – 43), and that has contributed to the Devils having the second best winning percentage in the league when scoring first – 25-3-2/.821 (the Caps are fourth: 21-4-2/.778).

If you look at that team's numbers on a measure by measure basis, you might wonder how they sit fourth in the league in points. But look at them collectively, and you find it is a team that doesn’t beat itself and is opportunistic to boot. The Devils are a team that takes care of business.

The Capitals have more skill than that team, but find themselves looking up at the Devils this morning. The silver lining for the home team in looking at the Devils’ example is, if the Caps can find a way to stop beating their heads against a wall by beating themselves so often (too many power plays allowed being the biggest problem), they might be the most difficult team in the East to beat come the spring.
Posted by The Peerless at 7:11 AM No comments: