The Washington Capitals had a successful Week 8.  Not a great week, mind you, but a successful one.  Such is the burden a good team bears.  Winning is sufficient, but not necessarily impressive.  We, as Caps fans, want them to look good – to play well – in doing it. 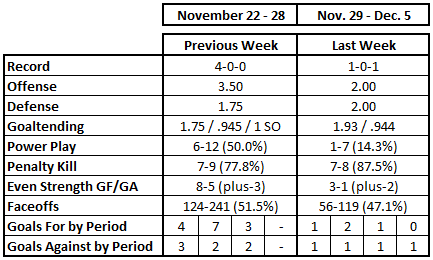 It was a light week of in-game work for the Capitals, a four-day break between the 4-2 win over the Toronto Maple Leafs to end Week 7 and the widely-anticipated contest against the Montreal Canadiens in the week’s first game, last Thursday.  When the Caps beat Montreal, 3-2, at Bell Centre it gave them an 8-0-1 record against Canadian teams this season, a perfect 5-0-0 on the road.  They then took to the skies and flew to Winnipeg.  They gave up a late first period goal but clawed back to tie the game in the second period.  Although the Jets would win the contest with a late overtime goal, the Caps earned a point to sustain their consecutive games points streak, now at seven at week’s end, and their unblemished record in regulation time against Canadian teams (8-0-2).

The best one could say of the offense in Week 8 was that it was balanced.  Nine different players recorded points on what would be a total of four goals.  Only two Caps – T.J. Oshie (2-0-2) and Nicklas Backstrom (1-1-2) had more than one point; Oshie was the only Capital with more than one goal.  The Caps had trouble getting started in games, and they had trouble finding the net overall.  Washington managed only six shots on goal in the each first period they played this week.  Overall, they finished the week with just four goals on 57 shots (7.0 percent).

The Caps did get some welcome contributions, despite the low-scoring week.  Tom Wilson scored the Caps’ first goal in their 3-2 win over Montreal to open the week, giving him goals in two straight games.  It was the first time in his career he recorded goals in consecutive games.  Andre Burakovsky had an assist on the Caps’ only goal in the 2-1 overtime loss to Winnipeg.  It was his first point since recording an assist in a 3-2 overtime loss to the Calgary Flames on November 13th.  It was just is second point in his last 16 games.  Brooks Laich had an assist in the Caps’ 3-2 win over Montreal.  It extended an odd “box-step” dance patter for the forward.  Assist-blank-blank-blank…assist-blank-blank-blank…assist-blank-blank-blank.  The pattern started over when he came up with a blank against Winnipeg.

Team defense was a bit lacking in Week 8, despite the low goals allowed total.  At least it was uneven.  The Caps allowed Montreal 56 shot attempts at 5-on-5 in the 3-2 win to open the week, the second highest number of 5-on-5 shot attempts allowed by the team so far this season.  The shot attempt differential of minus-23 was, by far, the worst this season (minus-11 versus Edmonton on November 23rd).

Then there was the game against Winnipeg.  The Caps out-attempted the Jets, 54-38, in the 2-1 overtime loss.  The 38 shot attempts against was the tenth-fewest allowed this season, and the shot attempt differential of plus-16 was the fourth-best.  Overall, the Caps had a below average possession week, posting a Corsi-for percentage of 48.1 overall, with a 50.2 in score-adjusted Corsi-for and a 47.9 in close score situations at 5-on-5.

At week’s end, Holtby had allowed two goals in four consecutive games (.943 save percentage) and has not allowed more than three goals in a game since November 3rd (10-1-1, 1.73, .940, one shutout).  Among goalies logging at least 750 minutes, Holtby ranks first in overall goals against average (1.95) and is tied for third in save percentage (.928). Here is the odd thing about Holtby’s workload, though.  Last season, Holtby appeared in 20 of the Caps’ first 25 games and logged 1,118 minutes.  Through 25 games so far this season, Holtby has appeared in 21 games and logged 1,261 minutes. 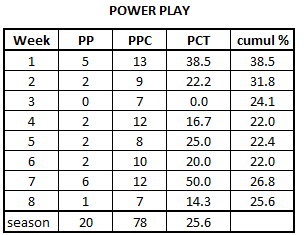 It could have been worse. The Caps did a fine job against the Canadiens on the penalty kill in the first game of the week in terms of opportunities (three), goals allowed (none), and shots allowed (five; 0.83 per minute).  Against Winnipeg, the Caps could have had a disaster on their hands, taking five minor penalties in the first period, giving the Jets four power play opportunities.  That the Caps came out of that with one power play goal allowed (their only one for the week) was more a credit to Braden Holtby, who stopped eight of nine power play shots on goal.  The Caps allowed 11 shots and the one goal in 8:20 of power play time to the Jets.  For the week, the numbers were one goal allowed on 16 shots in 14:20 of shorthanded ice time (1.11 shots per minute). 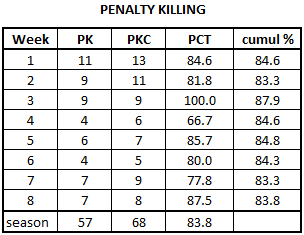 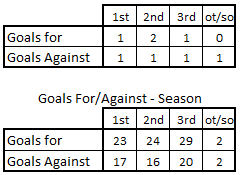 There was the consistency of small populations of events in Week 8.  One goal scored in the first periods of games, one in the third.  There were two goals in the second period, one in each game.  On the other side, there was one goal allowed in each of the first periods, second periods, and third periods for the week.  Unfortunately for the Caps, that consistency spilled over into overtime, allowing the one goal that kept them from extending their winning streak to a seventh game.  What is it with this team and “seventh” games?

The lasting image for the week, though, might be Barry Trotz behind the Caps bench at the end of the overtime loss to Winnipeg calling for and waiting – more than eight minutes – for a decision on a challenge issued on the game-winning goal.  At issue was the matter of whether Blake Wheeler’s left skate was on the ice (and on the blue line) or over it (and offside) as Jacob Trouba carried the puck into the offensive zone at the start of the last scoring sequence.  The play continued to the conclusion – the game-winning goal – before the challenge could be issued.  Then viewers on television were treated to four officials surrounding a table device with the same quizzical expressions one saw on the faces of the apes at the start of “2001: A Space Odyssey” when confronting the monolith for the first time.  It was not a good look for the officials, nor for advocates of the replay.  Imagine trying to discern whether a player’s skate is on or off the ice while looking at the screen of a tablet.  Of course the finding was “not conclusive in determining whether Winnipeg was off-side prior to the goal.”

It was the fourth straight time the Capitals challenged an opponent’s goal and had the challenge turned down.  The Caps are one-for-eight in challenges overall this season.  It made for a bitter end of the week, but in terms of the big picture, it was another winning week – the Caps’ seventh in eight weeks this season – and that matters more.

Posted by The Peerless at 10:04 AM No comments: