The Peerless Prognosticator is ON THE AIR!!! -- Game 14: Capitals at Red Wings, November 10th

The Washington Capitals embark on what amounts to “Reunion Week,” kicking off a two game road trip that will take them to Detroit to face the Red Wings and former Caps defenseman Mike Green on Tuesday and then to Philadelphia on Thursday where they could face former Caps netminder Michal Neuvirth.

First up is Washington’s first visit to Motown of the season.  It will be the 108th meeting of the clubs, all-time, and the Caps are 44-44-16-3 against the Red Wings in their first 107 meetings.  Washington is 17-22-11-3 when visiting Detroit, but they have had recent success at Joe Louis Arena.  In their last four visits to The Joe, Washington is 3-0-1.  The Caps have been successful on the road so far this season overall as well, going to Detroit with a 4-1-0 record away from Verizon Center.

The Caps started their road season in dominating fashion, winning their first three games and outscoring their opponents – Calgary, Edmonton, and Vancouver – by a 16-8 margin in the process.  Their last two road contests have not featured much in the way of fireworks, the Caps scoring two goals in each game and splitting the decisions, a 2-1 overtime win over the Florida Panthers and a 5-2 loss to the New York Rangers.

On the other side, the Red Wings are having their struggles at home.  Their 4-1 loss to the Dallas Stars on Sunday dropped their home record to 3-4-0 this season.  They have been outscored on home ice by a 17-15 margin, but this is a bit misleading.  Detroit won their first two home contests by a combined 7-1 margin.  They are 1-4-0 since and have been outscored, 16-8.

Overall, Henrik Zetterberg has had a hand in almost half of the goals scored by the Red Wings at home.  He is 2-5-7 for the Wings on home ice.  He is 4-11-15 overall, and he has not been held without a point in consecutive games so far this season.  Given that he was held without a point in the Red Wings’ loss to Dallas on Sunday, the Caps will have an opportunity to end that streak for Zetterberg.  In 14 career games against the Caps, he is 5-6-11, minus-1.

Justin Abdelkader and Gustav Nyquist are the goal scoring leaders for the Wings on home ice with three apiece.  Unfortunately for Detroit fans, that production came early in the Wings’ home season.  Abdelkader recorded all three of his goals in authoring a hat trick on Opening Night against the Toronto Maple Leafs, going 3-for-3 shooting that night.  In six home games since he is 0-for-12 shooting and did not record a shot on goal against Dallas on Sunday.  Abdelkader is 3-2-5, minus-3, in 11 career games against Washington.

Nyquist leads the team in goals overall (6), but his production at home has fallen off.  He had goals in two of his first three home games, but he has just one in his last one in his last four.  That one was the only goal in the Wings’ 4-1 loss to Dallas on Sunday.  Unfortunately, that goal was accompanied by a minus-3 (his goal was on a power play).  It was only the second time in 193 NHL games that he was a minus-3 in a game and the first time at home.  In six career games against Washington, Nyquist is 5-3-8, plus-2.

Goaltending has not been the problem for Detroit, either at home or in general.  Jimmy Howard and Petr Mrazek have split the minutes rather evenly so far, 432 for Mrazek and 405 for Howard.  Combined, they are tending goal to a 2.22 goals against average and a .930 save percentage.  It is even better at home where the goals against average is 1.89 for the two combined while sustaining a .930 save percentage.  If past is prolougue, Jimmy Howard could get the nod in this game.  Six of his seven appearances have come at home, where he is 3-3-0, 1.93, .922, with one shutout.  He did leave Sunday’s game in the third period with a head injury, but he was reported to have not been subjected to concussion protocol. 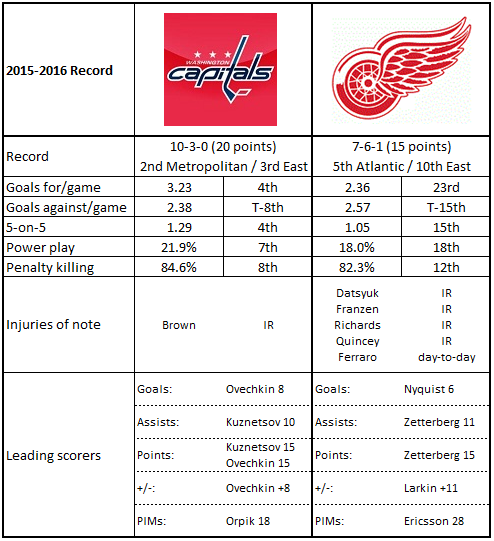 2.  Detroit does not get eye-popping offense out of their blue line, but it certainly is balanced.  Five defensemen have goals this season (led by Jakub Kindl with two), and seven have points (led by Niklas Kronwall with 5).  What they do not get is power play goal scoring from the blue line.  Brendan Smith is the only defenseman with a power play goal for the Wings this season.

3.  One thing to watch in this games is shots on goal.  Caps fans probably realize that the Caps lead the league in fewest shots on goal allowed (25.2 per game).  On the other side of the ledger, the Red Wings are last in the league in shots on goal per game (25.1).  Only once in seven home games have they recorded as many as 30 shots in a game, and four times they finished with fewer than 25 shots on goal.

5.  Once upon a time, the Red Wings were possession monsters. From the 2005-2006 season through last season the Red Wings finished over 50 percent every year in Corsi-for percentage at 5-on-5.  Four times in those ten seasons they finished above 55 percent.  This year, they are struggling.  Detroit ranks 29th of 30 teams in Corsi-for at fives (46.1).  Their score adjusted (46.8/29th) and close score (45.3/26th) are similarly disappointing.  They are better at home (50.5 overall/18th), but they do not remind fans of the editions of Red Wings teams past in this regard (all numbers from war-on-ice.com).

3.  The Caps have a three-man rotation on faceoffs – Nicklas Backstrom, Jay Beagle, and Evgeny Kuznetsov.  How many of you had Chandler Stephenson with the fourth-highest number of draws taken (without looking)?  Stephenson has taken 49 draws, winning 27 for a 55.1 percent winning percentage.

Mike Green’s first season with the Detroit Red Wings has started the way too many of his seasons with the Washington Capitals ended – nursing an injury.  Green started the season appearing in the Wings’ first seven games, recording a pair of assists.  However, after recording the second of his assists for the season in the first period of a game in his home town of Calgary against the Flames, he sustained an upper body injury when he was hit by the Flames’ Josh Jooris.  Green missed the next six games, returning to the lineup in Detroit’s 4-1 loss to Dallas on Sunday.  He recorded an assist, but was a minus-2.  In his eight games he has been on ice for five of the 11 goals scored against Detroit at 5-on-5.  He is still a minutes eater, though.  In each of his last four full games, Green has logged at least 22:47 in ice time, and he leads the team in average ice time at even strength (17:19 per game).  This is, of course, his first game against his old team.

Since Dmitry Orlov recorded a pair of goals in a 5-4 overtime loss to the Philadelphia Flyers on March 2, 2014, it will be 618 days, and counting, without a goal in the NHL when he takes the ice against the Red Wings on Tuesday.  That represents just 31 games of actual NHL activity in all that time, and Orlov does have four assists in the 13 games he has played to date.  Still, on a team where defensive defensemen Karl Alzner and Brooks Orpik already have goals, it would be good to get Orlov into crooked numbers.  Getting there will require some more aggressiveness in the offensive end.  In five road games he has only three shots on goal.  He has two career appearances against the Red Wings without a point.

The Caps are playing the Detroit Red Wings, but they are not exactly the “Detroit Red Wings.”  This is not the possession dominating, deeply skilled, supremely confident squad that over a 22-year period through last season played at a 48-23-6-6 pace per 82 games (108 points), won 13 division titles, went to six Stanley Cup finals and won four Cups.  It is a team in transition, having parted ways with recently minted hall of fame defenseman Nicklas Lidstrom via retirement after the 2011-2012 season, and with the last sturdy links to their Stanley Cup champions – Henrik Zetterberg, Pavel Datsyuk, Johan Franzen, and Niklas Kronwall – all north of 34 years of age.  This is a team working youth into the lineup.  For example, there is 19-year old Dylan Larkin – a 15th overall pick in the 2014 entry draft – with 10 points in 14 games, tied for second on the team.  There is less heralded Teemu Pulkkinen (4th rounder in 2010) with seven points in 14 games.

Then there is the new head coach, Jeff Blashill, taking over for Mike Babcock.  Think about that for a moment.  In the 21 seasons preceding this one, 19 of them were coached, in whole or in part, by Babcock and hall of famer Scotty Bowman.  There is a lot of history weighing on this transition period for the Wings.  Add to that the fact that the Red Wings are somewhat beat up (Pavel Datsyuk Johan Franzen, Brad Richards, and Kyle Quincey on injured reserve), the Caps having had had some recent success in this building, and that they are playing solid hockey so far, the road trip should get off to a good start for the Caps.