The Peerless Prognosticator is ON THE AIR!!! -- Game 32: Capitals at Panthers, December 13th

The Washington Capitals take the road on Friday to visit balmy Sunrise, Florida, and the Florida Panthers.

It’s John Vanbiesbrouck Bobblehead Night at BB&T Center (which, if you follow the Panthers, stands for “Bad, Bogus, and Terrible” Center).  What better bobblehead could represent the Panthers?  He is a guy who is eligible to join AARP (he turned 50 on September 4th), a goalie who played 449 games over 11 seasons in New York (of course!) before “retiring” to Florida at age 30 (ok, he was claimed on waivers from Vancouver, four days after the Rangers traded him to the Canucks) to grow bananas in his backyard, palm trees on his front lawn, and go on mall tours to teach fans about hockey.

The thing is, though, Beezer was part of what made the “glory days” of the Panthers franchise glorious.  In his first season there – in 1995-1996, the third season of the franchise’s existence – he backstopped the Panthers to the Stanley Cup final.  And while the Panthers might have been swept by the Colorado Avalanche in that 1996 final, he went down fighting, yielding the only goal of Game 4 in the 105th minute – the third overtime.

As for the current version of the Panthers, the only thing that growls – infrequently at that – is the canned panther growl on the public address system.  Florida is not a very good team.  They seem to have transplanted their Southeast Division mojo to their realigned Atlantic Division home rather nicely.

What they have done lately is play better.  They will bring a run of three wins in their last four games, their only loss coming against the Chicago Blackhawks, who seem to have that effect on most teams.

The Panthers’ 3-1-0 run over the last week has not been due to special teams.  Florida did not score a goal in any of the four games and is 0-for-13 dating back to their 4-2 loss to Ottawa on December 3rd.  Their penalty killing has been about as frustrated, going 7-for-11 (63.3 percent).  A big bite of that is having allowed power play goals on each of Chicago’s three power plays in the Blackhawks’ 6-2 win over the Panthers on December 8th.  They are 7-for-8 in their three wins.

If the Caps are taking this team lightly, they do so at their peril.  After an abysmal start (3-11-4 in their first 18 games), the Panthers are 7-6-1 in their last 14 games.  They are not measuring for space in the rafters for a Stanley Cup Champions banner, but Florida is at least treading water, so to speak.

Here is how the clubs compare overall, numbers-wise. 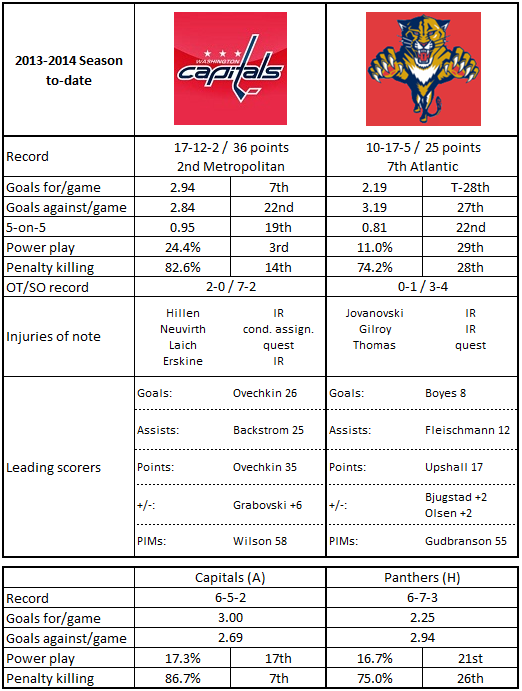 1.  The Florida Panthers do not handle the competitive portions of games very well.  Small surprise for a team that is tied for 28th in the league in standings points.  But here is an example.  In 5-on-5 close situations, the Panthers have the second worst shooting percentage in the league (5.1 percent). Only Buffalo, which seems intent on establishing the current era’s standard for miserable play, is worse (4.8 percent).

1.  As you probably already know by now, if Alex Ovechkin records a hat trick in this game, it will make 50 goals in his last 50 games.

3.  Eleven rookie goaltenders have dressed this season.  Philipp Grubauer ranks third among them in goals against average (1.36) and third in save percentage (.959).

4.  Washington has the fifth-best record in the league when trailing after two periods.  Don’t get all excited about that.  A 4-9-1 record is still a 4-9-1 record.

Tim Thomas left the ice early in Thursday’s practice for the Panthers, and the club called up Jacob Markstrom from their San Antonio affiliate in the AHL.  That means that backup Scott Clemmensen could be getting the call for the Panthers on Friday.  Clemmensen faced the Caps in the teams’ only meeting of the season to date, allowing two goals on only 23 shots in a 3-2 Gimmick win for the Caps on November 2nd.  He has not been as good since.  In three appearances since facing the Caps, one in relief, Clemmensen is 0-2-0, 3.86, .845 in 140 minutes of work.  He is barely better against the Caps over his career – 4-7-3, 3.77, .861 in 21 career appearances.

Ovechkin scores the goals, Backstrom sets the table, and Johansson…  Well, lately it is hard to figure out what Johansson is doing, at least offensively.  In his last ten games, Marcus Johansson has two assists,  He has only one shot on goal in each of his last four games.  More disturbing, he has one even strength goal on 36 shots for the season (2.8 percent).  He does have eight assists at even strength, which is not bad, but he presents little scoring threat from the left side of the top line.  Yes, Ovechkin has 96 shots on goal at even strength for the season, but Johansson’ ability to present even just a little more of a scoring threat could open things up even more for the top line.  He is 3-6-9, plus-4, in 14 career games against the Panthers.

1.  Shop.NHL.com.  If you shop on the NHL.com website (do not consider this an endorsement), you will note that the Florida Panthers are represented among the merchandise offerings.  They are an NHL team, and if the Caps take them as lightly as they did, oh, Carolina a little while ago, or if they peek ahead to their home-and-home against the Flyers following this game, it will be a hard night.

2.  Score first.  This is the NHL, so this goes without saying.  However, there is only one team in the NHL that has fewer wins when scoring the first goal than the five Florida has (that would be ghastly Buffalo, with no wins when scoring first).  But that’s because Florida scores first so infrequently, only nine times in 32 games.  Only Buffalo has scored first fewer times (5).

3.  It’s 18 skaters, not one.  It’s easy to get mesmerized by Alex Ovechkin when he’s in a zone, but the Caps are not going to get four of every five goals off Ovechkin’s stick and still win games.  He’s not going to have a 200 goal season.

On paper, this is a game that should be over by the second intermission.  The thing is, there is that home-and-home against the Flyers on Sunday coming up on Sunday and Tuesday, and there are issues involving those games that could be a bit of a distraction here.  This is where coaches and the team’s leaders need to step up and enforce focus on the matter at hand.  These are two points that the Caps have no business giving away.