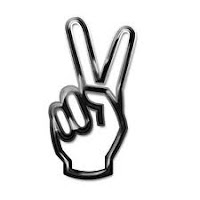 Groundhog Day is celebrated on February 4th in Montreal (not really, but humor us). Saint-Laurent Sebastien comes out of the St. Lawrence River, and if he sees his shadow, proclaims that the Canadiens will lose another 3-0 hockey match with the Washington Capitals.

Well, Seb must have seen his shadow, because it happened again.  For the second time this season, the Caps shutout the Canadiens, 3-0, at Bell Centre.  It was the third consecutive shutout of the Habs by the Caps, the trick turned by three different goaltenders.  Braden Holtby did it last season, a 2-0 shutout.  Michal Neuvrth did it by a 3-0 score last month.  And it is the third time int the last six times these teams have met that the Caps skated off with a 3-0 win against Montreal.

The Caps set a club first in this one, the first time in franchise history that they were the recipients of two penalty shots in the same game.  Troy Brouwer was granted the first one when Monteal goalie Peter Budaj got caught up in the whole "stick save" concept and let go of his stick with a loose puck lying close.  He was called for "throwing object at the puck," but he made up for it on the ensuing penalty shot by foiling Brouwer's attempt to solve the five-hole.

Budaj was not as lucky later.  Alexander Semin intercepted a ghastly backhand pass by Tomas Kaberle just inside the Caps' blue line.  All Kaberle could do after horking up the puck was chase and hook.  He did, and he did, and Semin was awarded the second penalty shot of the afternoon.  Amid a chorus of boos, just as had been the case for Brouwer on his attempt, Semin skate in, faked a fake slap shot, and rifled a slapper over Budaj's glove to provide the final margin of victory. 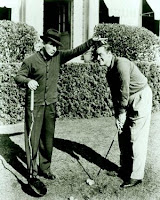 Before that, the Caps got a pair of odd goals -- Dennis Wideman took a slap shot from the point in the game's ninth minute that had the look of Bing...or maybe it was Bob, on the links.  Like a Titleist struggling to gain altitude out of the sand trap, the puck pitched up, fluttered, and settled ever so gently behind a startled Budaj for the Caps' first goal.

The second goal was a little more conventional, although its scorer might have been a bit unexpected.  Brooks Laich did some nice work with the puck behind the goal line to Budaj's left and inched out to try to score himself.  But the puck got lost in the noise of players around Budaj, and it squirted out to the slot where Matt Hendricks pounced, flipping the biscuit into the cupboard for his third goal of the season.  A chip, a flip, and a zip, leaving the Canadien fans booing at the end for things other than the other team getting a penalty shot.  And that was all it took for the Caps to inch just that much closer to a playoff spot.

-- One shot.  Five attempts.  Not exactly the most auspicious return to the ice for Alex Ovechkin, but hey... it was a win, so it's all good.

-- Only a fan would think it appropriate that if a goalie gets a shutout, he should earn it with a big save in the dying seconds.  We're betting Tomas Vokoun would just as soon not had to face a breakaway by Tomas Plekanec in the last half minute of the game.  He turned away Plekanec shot, and we wonder that had it gone in, whether Vokoun would have clubbed Dennis Wideman within an inch of his life for letting Plekanec get free to take a pass in the neutral zone from P.K. Subban on a backhander flip from the Montreal goal line.

-- The Caps displayed a little more balance in ice time than we are used to seeing under Dale Hunter. No skater was on for more than 22:30 (defenseman John Carlson), and no forward skated as many as 20 minutes.

-- Motto for the Caps' power play lately... "We might not be good, but we're exciting."  One shot on three power plays, two shorthanded shots allowed.  Not what we're looking for here.

-- Brooks Laich probably deserves better.  He did have two goals in his last four games coming into this game, but those had been his only two goals over his past 17 games.  He had enough effort to add to that total, but he was shut out from scoring on his own.  He did have a pair of assists, five shot attempts, two blocked shots, and he won 13 of 23 draws.

-- Keith Aucoin did play in this game (only 7:57) but he did make his presence felt with a couple of hits.

In the end, a solid, if not especially dominating win.  And if the object of the exercise on the road is to break even, the Caps did that on this three game road trip; they went 1-1-1.  But given the opponents and their precarious position in the standings, it had the feeling of an opportunity lost.

Now the Caps get the Boston Bruins at home 24 hours after a road game.  Not the easiest way to spend a Super Bowl Sunday.


Programming note...no pre-game blog for the Boston game.  We'll be back in the next day or two.
Posted by The Peerless at 9:28 PM No comments:

The Peerless Prognosticator is ON THE AIR!!! -- Game 51: Capitals at Canadiens, February 4th

The Washington Capitals bring their three-game road trip to an end with a visit to "La belle province" and the Montreal Canadiens. For those of you not acquainted with the French language, “La belle Province” is loosely translated as “place we can get up for games because people actually show up and care about hockey almost as much as they care that the people who coach hockey here can pronounce ‘La belle province’ and not sound like Rocky Balboa ordering French fries.”

The Canadiens are not “The Canadiens” these days. Montreal has struggled more often than not this season to string together wins. Since they had a four-game winning streak snapped on November 4th, they have not had more than two consecutive wins since. Since replacing head coach Jacques Martin with Randy Cunneyworth on December 17th, Montreal is 6-11-2, and have dropped from being only two points out of a playoff spot all the way to 14th in the Eastern Conference, ten points behind the eighth-place New Jersey Devils and ahead of the 15th place Carolina Hurricanes only by virtue of a tie-breaker (fewer games played).

They have, however, shown some signs of at least being competitive recently. Since the Caps shut them out on January 18th, Montreal is 2-2-1 (so, it’s not a big improvement), including a 7-2 thrashing of the Detroit Red Wings. Even if the Canadiens find themselves nine points behind the Caps, they are playing to a level on which they should not be taken lightly. Here is how the teams compare, numbers-wise: 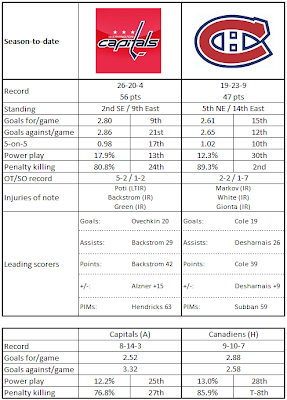 1. Montreal has the second best penalty killing squad in the league, but they come about that ranking in an odd way. No team has allowed fewer power play goals on the road than the Habs (eight in 104 shorthanded situations – 92.3 pecent). At home it is a different story. Not that the Canadiens are bad in killing penalties at home, but they are merely “good” – 85.9 percent. Alex Ovechkin notched a power play goal at Bell Centre in the Caps’ 3-0 win on January 18th.

3. If the Caps have a lead after two, don’t count on Montreal coming back. Only five teams have a worse winning percentage than Montreal’s .050 (1-16-3). And winning after taking a lead after 20 minutes is no sure thing, either. Only three teams have a worse winning percentage than Montreal when leading after the first period. They do seem to wilt in games. They are a plus-5 in goals scored/goals allowed in the first period of games this season and plus-5 in the second period. But they are a minus-12 in the third period.

4. Defenseman P.K. Subban is tied for the league lead in minor penalties taken.

1. Tomas Vokoun has only a 5-9-1-3 win-loss record against the Canadiens for his career, but that .921 career save percentage stands out.

2. The Caps are minus-7 (goals scored to goals allowed) in the first period of games this season and minus-10 in the second period. But they are plus-11 in the third period.

3. Only five teams have allowed more goals on the road this season than Washington (83).

5. Even though he hasn’t played a hockey game in a month, Nicklas Backstrom is still tied for fifth overall in power play assists.

Erik Cole might lead the team in goals, and David Desharnais might lead the club in assists. But Max Pacioretty is a player to watch on Bell Centre ice. He leads the team in goals, assists, and points at home. He is a tale of two players, home (12-16-28, plus-9) and road (6-3-9, minus-10). Regardless of location, he is 6-3-9, plus-4 in his last eight games, but he has yet to record a goal against Washington in his career (eight games played).

Well, yeah. After sitting out three games in which the Caps went 1-1-1, the Caps are sitting in ninth place in the East and are three points behind Florida in the Southeast Division. They are in desperate need of a kick start, and Ovechkin is in need of kick starting his game. He has 13 goals in 24 games against the Canadiens. He was 3-3-6, plus-4 in the six games leading up to his suspension. The trick will be to see if he can improve on that to start his second half and push the Caps closer to Florida.


1. It’s Saturday, not Sunday. The Caps are a team that has enough trouble focusing on the task at hand, and the distraction in this one is the fact that the Caps will return home to face Boston on Sunday. Think too much about that, and they’ll be facing Boston having lost three in a row. Play this game first.

2. Low Ball Price. Montreal goalie Carey Price has an odd quirk in his performance. In games he has faced more than 30 shots he has a save percentage of .925. When facing 30 or fewer, that save percentage drops to .901. Given how the Caps fare in getting shots, they might light him up for five goals on 18 shots.

3. In by two, out by three. It’s a 2:00 start – an odd time to start a hockey game, even for a weekend. But whatever time they start, having a solid first period makes all the difference. The Caps are one of four teams with an unblemished record after 20 minutes this season (15-0-0). If he Caps are leading at 3:00 (approximately when the second period will start), it will be a good omen.

In the end, one can now think of this as the beginning of the stretch run. The Caps get their captain back, Mike Green is at least skating again. And this is Montreal. There is much to feel good about, or at least much to get up for in this one. Flat is not going to cut it.