Week 16 for the Washington Capitals was as light a work week as one gets for an NHL team.  Postponement of their contest against the Pittsburgh Penguins on Sunday made for a one-game week, a 4-3 overtime loss to the Philadelphia Flyers.  It was not the way the Caps might have wanted to go into the All-Star Game break, but the break came at a welcome time. 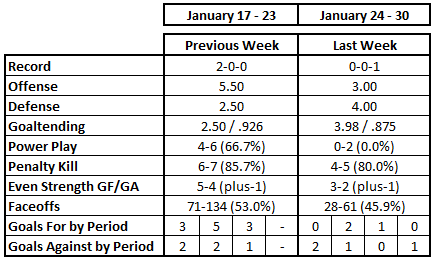 The overtime loss earned the Caps a point for the week, but it was still the first non-winning week since they went 1-1-1 in Week 5.  It did not keep them from going into the All-Star Game break with the league’s best record at 35-8-4.  Their 74 standings points are four more than the Chicago Blackhawks, and the Caps have six games in hand.  Their 1.57 standings points per game is well clear of the second-place Dallas Stars (1.34).

If you are trying to divine anything out of this, consider the history of teams leading the league in points at the major season breaks (All-Star Game or Olympics) since the 2004-2005 lockout: 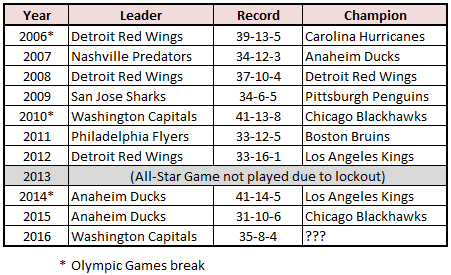 Let’s think of this as an incentive to buck the trend. 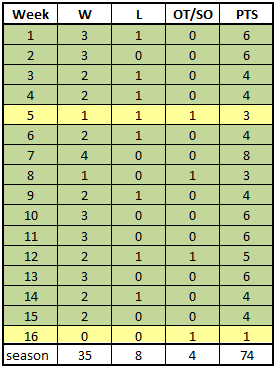 The Caps headed into the All-Star break with the league’s top scoring offense, a ranking they have not finished a season with since they led the league in 2009-2010 with a scoring average of 3.82 goals per game (still the top scoring offense of the post 2004-2005 lockout period).  It is a 12.2 percent improvement on the scoring average they took into last season’s All-Star game break (2.96).

If defense wins championships, the Caps have one capable of achieving that outcome. Had they not allowed the goal in overtime to the Flyers last Wednesday, the Caps would have the best scoring defense in the league.  As it is, they went into the break with the second-best scoring defense, the 2.19 goals per game they allowed substantially better than their second best performance since the 2004-2005 lockout (2.33 goals per game in 2010-2011).

The Caps possession numbers to date have far underperformed their win-loss record, and that might be the biggest concern at the break.  Washington ranks 14th in the league in Corsi-for at 5-on-5 overall (50.4 percent), eighth in score-adjusted Corsi-for (52.0 percent), and 16th in close score situations (49.6 percent).  Those numbers are a bit under the ones the Caps posted heading into last year’s All-Star break – 51.5 percent overall, 52.3 percent in score-adjusted Corsi-for, and 52.7 percent in close score situations (numbers from war-on-ice.com).

At this year’s All-Star game break there are 35 goaltenders who have logged at least 1,200 minutes of ice time.  Of that group, Braden Holtby ranks at or near the top in a number of categories:

He has been the key part in the Caps’ goaltending profile that is flirting with a team goals against average of 2.00 per game and a save percentage bumping up against the .930 mark overall.  Holtby is, at the break, on a short list of candidates to win the Vezina Trophy.

In both Holtby and Grubauer the Caps find themselves in better position at the position than they were heading into the All-Star break last season.  Holtby was having a fine season, posting a 22-9-8/2.26/.921/4 shutout record at the break.  What they were not getting enough of was solid netminding in his absence.  Justin Peters was 2-4-1/3.52/.864, and those numbers dragged the overall goaltending numbers to 2.47/.913.

The better backup goaltending has not made an appreciable dent in Holtby’s workload, though.  Last season he had 40 appearances in 46 games heading into the All-Star break, logging a total of 2,332 minutes.  This season, through 47 games going into the break, he has 39 appearances  and 2,264 minutes, about four fewer periods of hockey.  Even in shots faced, Holtby’s workload is similar to last year’s.  At this time last year he faced 28.8 shots per 60 minutes.  At the moment, that number is 28.9 shots per 60 minutes.

What is perhaps most encouraging about the power play improvement is that it is not a function of the production of Alex Ovechkin.  At the All-Star break last season, 12 of his 27 goals were scored on the power play.  As of this weekend, 11 of his 28 goals scored this season were recorded with the man advantage. 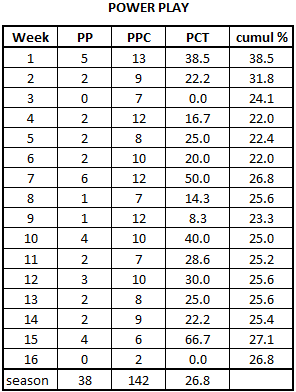 The difference on the other side of special teams from year-to-year at the All-Star break boils down to one word – discipline.  Through 47 games this season, the Caps are tied for the sixth fewest number of shorthanded situations faced (144).  Through 46 games at the break last season the Caps had faced 156 chances, a reduction of better than eight percent.  It has been part of a significant improvement in penalty killing efficiency.  At the All-Star break last season the Caps were killing penalties at a 79.5 percent rate.  Today, they rank fourth in the league with a penalty kill more than five percentage points better.

Success on the penalty kill seems to bear little relationship to wins and losses this season.  The Caps are 20-5-1 when posting a perfect penalty kill, 15-3-3 when they allow the opponent at least one power play tally.  Instances of shorthanded situations are a bit of a different story. The Caps are 26-6-2 when facing three or fewer shorthanded situations, 9-3-2 when they face more than three such situations. 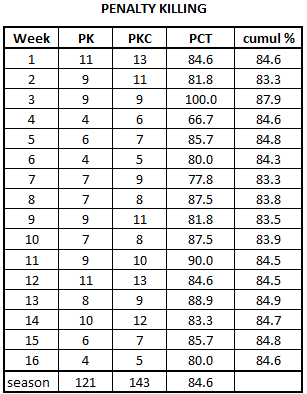 The All-Star game break provides an opportunity to take stock and see just if, where, and how the team has improved on a year-to-year basis.  The Caps have that gaudy record that looks like Secretariat’s stretch run in the Belmont Stakes in 1973.  They have not done it the way the new generation of methodologists would argue is key to success, by dominating possession statistics. In that regard, the Caps are a rather ordinary team.  This should give fans pause who want to find a place to set up their lawn chairs for the championship parade in June.

What they have done is avoid the hills and valleys (mostly the valleys) that a team usually encounters over the course of an 82-game season.  It is a team that can be characterized as “taking care of business,” and that shows up in a couple of performance statistics – early game performance and goal differential by period.  The Caps have displayed a talent, not just of taking a lead (they have the seventh-highest rate of leads taken to games played – 55.3 percent),  but in holding it.  Their 25-1-0 record when scoring first leads the league in winning percentage (.962).  And, they have yet to lose a game in regulation when leading after one period (17-0-0) or when leading after two periods (26-0-1), the only team in the league that can make that claim.

The goal differential by period reflects a certain focus, a “60 minute” approach that has been lacking among many previous editions of the club.  Until they allowed two goals to the Flyers in the lone game of Week 16, the Caps were the only club in the league with a plus-10 or better goal differential in each of the three regulation periods.  As it is, they are plus-9 in the first periods of games, and their plus-22 in each of the second and third periods of games is tops in the league for both.

It is hard to say that there is room for improvement for a team with a 35-8-4 record at the All-Star game break, but the possession numbers do stand out as something to follow as the stretch run begins on the 2015-2016 season.  If those measures improve, the Caps will be an even more formidable team than the one that dominated in the pre-All-Star game portion of the season.

Three Stars at the Break: