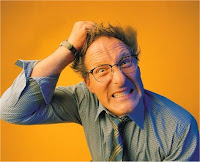 It’s first to four, not first to two…

“They’re half way there, cuz.”

We know, Cheerless. We were there yesterday.

- We suspect much will be made of the fact that Alex Ovechkin didn’t get back in time to defend on the two-on-one break with Tom Poti back that resulted in Ryan Callahan’s goal – the only one of the game. But if you look at the shift times, Ovechkin was at the end of his shift, and if you rewind the play, you’ll note that the other defenseman was caught below the faceoff dots when the play started the other way – Mike Green. The Caps give up chances like this in the game they play.

I know what I said.

- OK, so now we know why Bruce Boudreau is a Jack Adams winner, and we are…well, a Jack Daniels drinker. Simeon Varlamov got the nod and was brilliant. The kid deserved so much better in his NHL playoff debut.

- Before the third period, we took note of the bird that was flying around the arena bowl. It landed in the crease that Henrik Lundqvist would occupy in the last frame. We were so hoping it would leave a present for him as a sign.

- The Caps look less focused in this series than they did in last year’s Flyers series. Losing to the Flyers last year was disappointing, but understandable…the clubs were very evenly matched. If the Caps lose this series, it will haunt them. They are a much better team. But the Rangers are flat out out-working them in the corners, along the boards, and in the high-traffic areas.

- On that last point, Mike Green summed it up…"A lot of shots were coming from the outside, but rebounds were coming into spots where we needed to be, but we weren't there." It seemed a case of timing and position as much as anything else. Rebounds looked as though they had eyes to avoid Capitals. A puck laying almost at Viktor Kozlov’s feet, but he was in too deep. Another puck that slid so tantalizingly up the slot away from Lundqvist that no Caps could reach.

- Coulda, woulda, shoulda…part of the problem is those shots coming from outside. Lundqvist is getting good looks at them…too good. The only shot that appeared to beat him cleanly was a third period rocket from Ovechkin from the slot that hit the crossbar and jumped into the screen over the glass.

This is the fifth time in Capitals history that they have lost the first two games of a playoff series. To date, they are 0-4 in those series, and in none of them did they manage to extend the series to as much as a sixth game (they’ve been swept twice and were ousted in five games twice). Here is the history (final results in parentheses)…

But while it is said that less than 13 percent of teams falling behind 0-2 in games come back to win a series, that’s still about one-in-eight. That means that someone is likely to do it this spring. After all the ink and pixels devoted to Jose Theodore’s implosion, Henrik Lundqvist’s sublime play, this, that, and the other thing….the fact remains that these have been two one-goal games. It is not as if the Rangers have dominated., Larry Brooks and Stan Fischler aside. But the Rangers are up, 2-0, too. No time like now to make some history of a team sort. The individual stuff doesn’t matter anymore.
But Caps fans wake up today facing an uncomfortable possibility...that we've seen our last game at Verizon Center this year.
Posted by The Peerless at 9:08 AM 2 comments: