Crosby and the uncertainty of the "high ankle sprain" 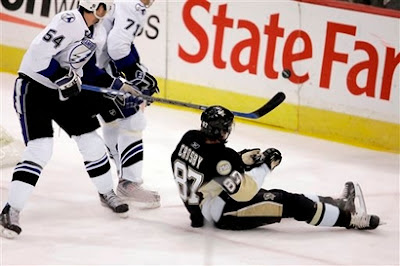 That thunderclap you thought you heard last night across the NHL landscape?...It wasn't thunder, it was Sidney Crosby crashing into the end boards at Mellon Arena in the first period of a 3-0 loss to the Tampa Bay Lightning.
Any Caps fan who has been around for a few years had two words come to mind in seeing the play or hearing the news...
"Pat Peake."
Fortunately for the Penguins, their fans, and the league, not to mention Crosby himself, the injury does not appear to be as serious as that which effectively ended Peake's career.
But the nature of the injury -- initially diagnosed as a "high ankle sprain -- is hard to pin down in terms of when the injured party can return to duty.
The Penguins have some recent experience in that area, as the case of goaltender Marc-Andre Fleury continues along its own uncertain path. This is the context that probably has Penguin Nation even more concerned than had it just been The Franchise skidding into the boards. That Fleury is not back, does not seem close to coming back, and is not sure when he'll come back is backdrop to what might be concerns over whether Crosby might suffer a similarly lengthy absence from the ice, especially since skating is such a large weapon in his considerable repertoire.
The folks over at the Fanhouse take a look at the incident and the nature of the "syndesomosis ligament injury." And, as the Pittsburgh Post-Gazette reports, he will be re-evaluated today.
As odd as it might sound, while this sort of sprain is often more serious than the common ankle sprain, it might have ended a lot worse.
The way it did for Peake...in Pittsburgh.

The Peerless Prognosticator is ON THE AIR!!! -- Caps vs. Panthers, January 19th

It’s a gray and gloomy Saturday here in the Most Powerful City on the Planet as The Most Powerful Hockey Team in the District of Columbia is set to take on the Florida Panthers at Verizon Center this evening.

Florida, despite its reputation as a haven for retirees and palmetto bugs the size of Volkswagens, is actually a pretty quirky state with some odd history and odd facts. For example, did you know…

Florida has had 6 Constitutions since it became a state…apparently, some might say, none of them had clear provisions on how to count votes.

Juan Ponce de Leon arrived in what is now the state on March 27, 1513. He named it "Pascua Florida" because he arrived during the time of the Feast of Flowers. If he arrived today, what is the Spanish term for “early bird special?”

The first semi-permanent settlements appeared in Florida around 5000 B.C. The inhabitants were the family of a dry cleaner operator who retired there from Hoboken, NJ. They still live in Fort Myers.

The first commercial airline flight in history took place in Florida, between Tampa and St. Petersburg, in 1914…Amelia Earhart was not the pilot.

There is a town in Florida called Altamonte Springs…north of Orlando. According to the web site, “Great Florida Vacations, “Altamonte” means, “high hill.”…in central Florida…where the mean elevation is 87 feet above sea level. Folks in Florida have a sense of humor.

Florida also differentiates between its “state marine mammal” and its “state saltwater mammal.” That would be the manatee and the porpoise (“also commonly known as the dolphin,” according to the State…marine biologists might claim to differ), respectively. The state land mammal is Bobby Bowden.

Miami Beach pharmacist Benjamin Green invented the first suntan cream in 1944. He accomplished this development by cooking cocoa butter in a granite coffee pot on his wife's stove…this is the same method for brewing Starbuck’s Coffee.

If you’re in Orlando…with your elephant…and you park him at a meter…and the time runs out…you have to pay the fine.

You single ladies?...if you’re planning a sky-diving trip in Florida on a Sunday…don’t. That’s against the law, too.

And, finally, according to the folks at Busch Gardens SeaWorld, “an adult Florida panther needs to eat about 35-50 deer-sized animals each year.” No word on whether this might include Martin St. Louis.

As for the game itself, the Panthers are one of those teams of which it could be asked, “WHY THE #@%& CAN’T WE BEAT THESE GUYS?!”

Over the last four seasons, including four games so far in this one, the Caps are 6-12-6-2 and have been outscored 57-73 in that span. Part of that was the spectre of Roberto Luongo haunting their days and nights, but the Caps are 4-5-3 in the last 12 games of this series without Luongo in a Panther sweater (outscored, 31-36).

We really don’t have an answer for this, just as we don’t have one for why the Caps have Ottawa’s number this year, or why Jimmy Kimmel has work.

The Caps come into this game with motivation – they can reach the .500 mark for the first time since beating Tampa Bay, 5-3, last October 24th to go 4-4-0. On top of that, Florida comes into this game 3-7-1 in their last 11 games, although they did solve the New Jersey Devils and Martin Brodeur last night, 2-1.

Florida doesn’t come upon their recent woes by accident:

It is part of a broader anemic offense in these 11 games – 21 total goals scored (1.91/game) and a total of four power play goals (0.36/game). Part of that is a product of injuries. As Mike Vogel reports in the Caps’ gameday, here is what plagues the Panthers:

The Caps come into this game 7-2-1 in their last ten games, with three of those wins against East-leading Ottawa. But, they haven’t played a game against a Southeast team since December 26th, and this game takes on the added importance of being one of those “four-point” games within the division as the Caps try to inch up on the revolving door of first place in the division (today occupied by Carolina).

This is an “opportunity” game. The Caps have games in hand on all four SE opponents, they can pass a depleted Florida squad with a regulation win tonight, they can finally get back to .500 for the season, they can close to within three points of Carolina (with three games in hand) with a win. If the boys can’t get motivated for this sort of a game – even if it is in the middle of January – then we’ve got problems.

But fear not, Caps fans…the boys are in the midst of a nice run, and it doesn’t stop tonight…