The Peerless Prognosticator is ON THE AIR!!! -- Game 2: Capitals at Penguins, October 4th

The Washington Capitals open the road portion of their season on Thursday night when they visit PPG Paints Arena in Pittsburgh to face the Penguins their season opener.  When last seen on this ice sheet, the Capitals were celebrating Evgeny Kuznetsov’s game-winning, series-clinching, demon-slaying overtime goal to send the Capitals to the Eastern Conference final last spring and the Pens to drown their sorrows in pickled herring.

As the teams take their first steps on this season’s journey, both are in familiar territory.  Both are thought to be contenders for a Metropolitan Division crown (the Caps have won it the past three seasons, while the Penguins finished second in those seasons).  Both will be threats to top the 100-point mark (both teams have done so the past three seasons).  Each will be eyeing the other warily in anticipation of yet another second round matchup next spring (they have met there in each of the last three postseasons).

But for now, the theme might be the unfamiliar.  The Caps take the ice in this contest as the defending Stanley Cup champion, the first time they can say that in their history, while the Penguins are starting a season without that “defending Stanley Cup champion” label, having lost their last playoff series, the first time they lost a playoff series since the New York Rangers ended their season in the first round of the 2015 playoffs.

If Pittsburgh does not return virtually its entire lineup from last season, as did the Caps, they return the essentials.  They return their top nine point-getters from last season, a group that contributed 199 of the team’s 270 goals scored last season.  Evgeni Malkin led all Penguins with 42 goals and 98 points, most in both categories since he had 50 goals and 109 points in 2011-2012.  Last season was also Malkin’s most efficient from a goal-scoring standpoint, converting a career high 17.6 percent of his shots on goal.  His success last season was due, in part, to durability he has not displayed in recent seasons.  He dressed for 78 games, more than any season since he appeared in all 82 games of the 2008-2009 season.  On the other side, he has been known to be chippy from time to time, and his 87 penalty minutes were more than he had in any season since 2009-2010, when he had 100 PIMs in 67 games.  Malkin is 18-39-57, even, in 40 career games against Washington.

Thirteen seasons, thirteen times averaging at least a point per game.  Sidney Crosby is the only player in the league to have averaged at least a point per game in every season since 2005-2006 (Malkin is second with 11 seasons, and Alex Ovechkin is third with ten).  However, it might be time to at least whisper, “is Crosby slowing down?”  Over his first nine seasons he ranged from 1.26 to 1.68 points per game and averaged 1.40 points per game over the period.  However, over the last four seasons his points per game ranged from 1.06 to 1.19 and averaged 1.11.

“Slowing down” as it applies to Crosby is a relative thing and needs to be looked at in the context of the high performance standard he has set for more than a decade.  Over the last four seasons, only 12 players (including Crosby) have had at least one season averaging 1.11 points per game (Malkin, Nikita Kucherov, and Connor McDavid did it twice).  It is not an easy feat.  His slipping just a touch showed up in the postseason recognition, too.  He finished fifth in the voting at center for the NHL All-Star team, his lowest finish in a season in which he appeared in 50 or more games since 2007-2008, when he finished fifth.  He finished 17th in the Hart Trophy voting, his lowest finish in a 50-plus game season since that same 2007-2008 season when he finished 17th.  Crosby is 20-43-63, minus-2, in 45 career games against Washington.

Over a six-year period, defenseman Kris Letang finished in the top-ten in Norris Trophy voting as the league’s top defenseman five times and was a finalist once.  The only time he did not receive votes, in 2013-2014, he played in only 37 games due to injury and a heart ailment.  In each of the last two seasons, though, Letang has received no votes for the Norris, a product of his appearing in only 41 games in 2016-2017, but last year receiving no votes despite playing in 79 games, the most in a season since he dressed for all 82 games in 2010-2011.  He does have quite a resume, though.  Since he became a full-time player in 2007-2008, he ranks 11th in goals scored by a defenseman (94) and is ninth in points (435).  But his presence was an important ingredient to Penguin success last year.  Pittsburgh was 20-4-4 in games in which Letang skated more than 26 minutes.  In 34 career games against the Caps, Letang is 5-10-15, minus-23.  Yes… minus-23. 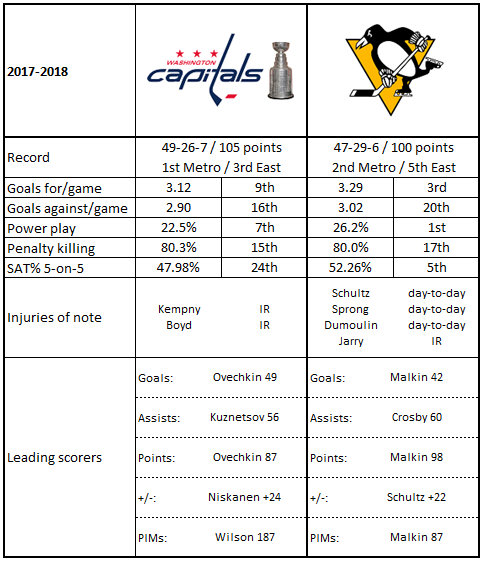 4.  The Penguins were a successful team when pulling the goalie last year.  The nine goals they scored at 6-on-5 were second most in the league.  Philadelphia had ten.

5.  Pittsburgh had shooting issues on home ice.  Their 7.3 percent shooting percentage at 5-on-5 ranked 22nd in the league (source: NHL.com).

2.  It would make sense, given the last item, that Nicklas Backstrom has more assists against the Penguins than any other player since 2005-2006.  He does, and that’s not close, either.  His 40 assists, accumulated since he came into the league in 2007-2008, are nine more than Claude Giroux.

4.  Washington did not lack for power play chances against Pittsburgh last season.  No team in the league had more chances (18).  But they converted only two; only four teams had a worse success rate against the Penguins than the Caps (11.1 percent).

5.  The Caps were just about as unsuccessful killing penalties against the Pens last season.  There was the problem of too many shorthanded situations faced (19, more than any other team), and killing only 13 of them, the 68.4 percent penalty killing 20th among teams facing the Penguins.

For a guy with two Stanley Cups, this guy seems to have something to prove.  No goalie in his first three seasons appeared in more postseason games than Murray (44), but that really is not the issue, at least entirely.  After winning Cups in his first two  seasons, he made Marc-Andre Fleury expendable and eventually available in the expansion draft, where he was taken by the Vegas Golden Knights.  His third season did not follow the script, though.  He missed seven games in two different chunks to injury, and he was absent for six games for family reasons, dressing for a total of 49 games in the regular season.  He was not especially effective, his .907 save percentage ranking 37th of 45 goalies with at least 1,500 minutes of ice time, and his 2.92 goals against average ranking 31sdt in that group.  He was hardly better in the postseason, his .908 save percentage ranking 11th of 20 goalies with at least 100 minutes, and his 2.43 goals against average ranking eighth.  Perhaps with less misfortune than he endured last season he will rebound to reach the elite level expected of him.  It is hard to see how the Penguins go deep in the spring without him approaching that level.  Murray is 4-4-0, 3.66, .882 in eight appearances against the Capitals.

The schedule makers did the Caps no favors giving them a back-to-back set of games to open the season.  That they will have six days off before taking the ice for Game 3 on the schedule suggests that Braden Holtby will get the call in Pittsburgh after starting on Opening Night.  It might be worth noting that while Holtby did start consecutive games once last season, he did not finish consecutive games.  He was pulled 21 minutes into a 3-1 loss to the New York Islanders after allowing three goals on 12 shots on December 11th, and then he followed that up the next night with a 22-save effort in a 5-2 win over the Colorado Avalanche.  He has not started and finished back-to-back games since he stopped 22 shots in a 4-2 win over the Colorado Avalanche on February 6, 2016, followed by a 33-save gem in a 3-2 win over the Philadelphia Flyers.  Holtby is 8-9-2, 2.90, .911, with two shutouts in 20 career appearances against the Penguins.

Opening Night was emotion on steroids for the Capitals.  The red carpet, the crowd, the banner raising.  One wonders what the Caps will have in the tank on a night following such a scene.  It will be something of an odd season opener for the Penguins in that for the first time in three seasons they do not have a banner raising of their own.  This might be a game played on raw dislike for one another, the Pens wanting to send a message that the Caps can count on being “one-and-done” as far as championships go, and the Caps, well…because  it’s the Penguins.  It is always interesting between these teams, and this should be no different.