The Transcript You Didn't Get to Read 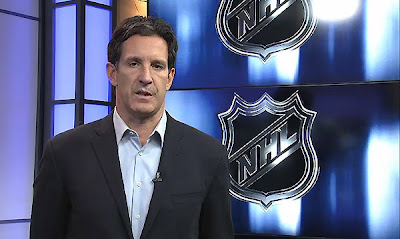 As the video shows, Michalek has Hendricks lined up for what could and should be a clean and hard body check. However, he uses his elbow to deliver a hit on Hendricks. This is a violation of the elbowing rule, which states: 'The referee, at his discretion, may assess a minor penalty, based on the degree of violence, to a player guilty of elbowing an opponent.” The referee exercised his discretion and called Michalek for elbowing Hendricks.

Although both players are pursuing the puck, the act of elbowing causes contact to Hendrick’s neck and head. Some interpretations of the video record indicate that as Michalek closed in on Hendricks, his knee hit Hendricks’ leg and caused Michalek to lose balance and lurch into Hendricks. It is as good an explanation as any.

Often when players are competing for or racing a loose puck, a violent collision will ensue as a result. This is one of those occasions. The fact that Michalek’s elbow made contact with Hendricks’ head was incidental to the play, and besides, in addition to “losing balance,” a situation I encountered often as a player (wink), as Michalek himself noted, “I know that I made a bad play and maybe I was still a little bit mad about the hit before [from Alex Ovechkin]. That’s how it is.”

We accept Michalek’s assertion that, “that’s how it is.” This absolves Michalek of any further responsibility for any contact to the head. It is important to note that Michalek has never been suspended by the league for prior transgressions or violations of the rules. He is not a repeat offender. Having been absolved as an offender in this instance, he cannot be a “repeat offender” if he should be involved in a similar incident in the future. On the other hand, Matt Hendricks is a tough guy and should just have just rubbed some spit on it and skated off.

To summarize: The players were competing for a loose puck. Michalek trailed the play and, as the players arrived at the puck, Michalek’s knee struck Hendricks’ leg, causing Michalek to lose balance and lurch forward, elbowing Hendricks in the back of the head and neck. Michalek was called for a penalty. However, he has never been suspended by the league and thus is not a “repeat offender.” We did not think the incident was much of a penalty, for that matter.

The department of player safety has decided against suspending Zbynek Michalek for his elbowing Matt Hendricks.

We Are No-Go for "Launch"

That was the headline on tsn.ca with a photo of Alex Ovechkin sitting on the bench, leaning over the railing of the boards and watching play. All that was missing was a set of cell bars PhotoShopped into the image.

Alex Ovechkin was give a three-game suspension yesterday by Brendan Shanahan, Senior Vice President for Player Safety and Hockey Operations for the NHL, for Ovechkin’s hit on Zbynek Michalek during last Sunday’s game between the Caps and the Pittsburgh Penguins. This is Ovechkin’s third suspension for excessively violent hits on players. The first came on December 1, 2009 -- a two game suspension for a knee-on-knee hit to Carolina's Tim Gleason. The second came on March 15, 2010 – another two-game suspension for was was called a "reckless" hit for boarding defenseman Brian Campbell in a game between the Caps and the Chicago Blackhawks.

Shanahan cited three factors in his decision to suspend Ovechkin. First, that the act constituted “charging” under Rule 42, which states: “A minor or major penalty shall be imposed on a player who skates into of jumps into or charges into an opponent in any manner.” Ovechkin was not penalized by the on-ice referees during the game for charging on the play (although in our opinion he should have been).

There can be little doubt that the collision between Ovechkin and Michalek was violent. The issue, though, is whether the hit constituted “charging” under the rule. If there is a tendency for some players to “embellish” calls on the ice to try to draw a penalty, the league should be considered of being guilty of “embellishment” in this instance to sell a decision. Shanahan used the word “launch,” or a variation of it, six times in a 409 word statement announcing the decision.

Ask yourself, which of the two verbs, “jump” (which is used in the rule) or “launch” – the verb of choice for Shanahan – is the more pejorative. Note that Shanahan does not used the verb “jump” except to recite the rule.  The word "launch" does not appear in the NHL rule book.

The second factor in Shanahan’s decision is apparently a mitigating one; Michalek suppered no apparent injury on the play. This is the 26th in-season suspension meted out by Shanahan this season, the average length being slightly more than three games (a high of eight games to Edmonton’s Andy Sutton for charging and a low of one that was given to three different players). This should be considered an “average” suspension in the Shanahan body of work. But that is after the mitigating circumstance of Michalek’s physical condition after the hit that presumably shave some number of games off what the nature of the hit merited on its own. Well, was it the nature of the hit that presumably merited more games, absent the state of Michalek’s health? Shanahan’s statement notes that “Although Michalek's shoulder might be the initial point of contact for this hit, the act of launching causes contact to Michalek's head (there is that verb, “launch,” again).”

This was not a head shot of the sort that, say, Rene Bourque received five games for – a suspension that did not have the mitigating factor of Nicklas Backstrom’s not being injured on the play (Backstrom has not returned to the lineup since that hit in a game on January 3rd; he has missed nine games). Was Ovechkin’s hit, absent the mitigating factor of Michalek’s returning to the game (and later inflicting his own hit on Capital Matt Hendricks that was reviewed by the league), the equivalent of Bourque’s hit on the merits in the league’s eyes? If one believes that Ovechkin caught a break because Michalek was not injured, then that would seem a reasonable conclusion. It would be hard to equate an elbow to the side of the head with a hit in which the first point of contact was the shoulder, though.

Third, Shanahan noted that Ovechkin has a “supplemental discipline history.” This is fun with words. The NHL does not consider Ovechkin a “repeat offender” because he has not been disciplined by the league in the past 18 months. But the fact that he has prior offenses weighs in the decision to apply a suspension and/or to settle on the number of games to be served. Either prior transgressions are, or they are not a factor. The “repeat offender” tag and the “statute of limitations” attaching to it would appear to have little, if any meaning.

The wild card in this is the fact that the Washington-Pittsburgh game was televised to a national audience in the U.S. During that telecast, the hit was replayed several times with voice-over commentary on what was wrong about the hit. We understand that this is the job of analysts such as Ed Olczyk and Pierre McGuire, who offered their own takes on the hit during those replays. But the commentary was lacking on Michalek’s hit later in the contest on Matt Hendricks when he elbowed Hendricks in the back of the neck and drove him into the boards. The worst that could be said of that incident in the commentary was that it was “pretty graphic” in the words of McGuire. Otherwise, it was treated as a garden variety elbowing penalty (for which Michalek was charged).

On balance, stripping away all the words, all the terms like “repeat offender” and “supplemental discipline history,” even who was involved, we are left with the act itself. Was a player hitting another player shoulder first upon leaving his feet (which the player did, in fact, do), then riding up and making contact with the opponent’s head, a penalty? We would think so. Hockey is played at high speed, and watching replays in slow motion do not do justice to the manner in which decision have to be made in the blink of an eye. But we think Ovechkin had sufficient time and space to either avoid the hit or to merely let Michalek know that he was there with a less violent hit. Was it a suspendable offense? If you are of a mind that the NHL is and should be trying to take collisions involving contact with the head out of the game, then a reasonable person could conclude that this hit was suspendable. But there is a curious sliding scale being imposed in these decisions, and two hits serve to make the point. Not coincidentally, they involve the same team.

In one instance, a player elbows another in the head and is a repeat offender in the eyes of the league (having been suspended only 16 days before this incident). The player is injured and has yet to return to the lineup. In the other incident, a player checks – charges into, if you will – another player into the boards without initial contact involving the head, is not a “repeat offender,” and the opponent does not miss a shift to injury.

If you take out the injury variable and the fact that the league apparently treats the terms “repeat offender” and “supplemental discipline history” interchangeably, it would appear that the Rene Bourque hit on Nicklas Backstrom and that of Alex Ovechkin on Zbynek Michalek are essentially one and the same. We beg to differ, and it makes one wonder if the league has improved itself in applying penalties consistently for the same offenses, or if it has merely settled on consistent length-of-suspension for hits that are very different, merely adjusting for whether the victim of a hit returns to the game. For the record, we probably would have given Ovechkin a game, but we will acknowledge that we see that through the red, white, and blue eyes of a Caps fan. Nevertheless, consistency seems still to be an issue with these things.
Posted by The Peerless at 7:28 AM 6 comments: