"Life isn't about finding yourself. Life is about creating yourself."
-- George Bernard Shaw

Some might think it a modest achievement that Eric Fehr set his second best career marks in goals (13), tied for his career best in assists (18), and set a second best career mark in points (31) last season.  He set career highs in games played (73) and average ice time (14:45).  However, given the journey of the former first round draft pick, 2013-2014 was a fine season.

Fehr, who was the 18th overall pick in the 2003 entry draft, has endured back injuries, multiple shoulder injuries, rib injuries, was traded away, returned as a free agent, and remade himself from a big goal scorer upon his draft by the club to more of a checking line, two-way winger in his current edition.

Fehr found his place last year on a third line with Jason Chimera and Joel Ward that provided the Capitals with consistently solid play.  There was a consistency in his game as well, despite what might be considered modest scoring numbers.  Although he finished the 2013-2014 season with 31 points, he registered points against 21 of the 29 teams against whom he played, including 11 of the other 14 teams in the Eastern Conference.

Fehr did this while learning a new position on the fly.  Drafted and playing most of his career as a right winger, Fehr was converted to center under head coach Adam Oates.  He was a solid possession player, at least in the context of the team for which he played, finishing fourth among all Capital forwards who played the entire season in Washington in Corsi-relative at 5-on-5 (+2.04 percent).  And, he did that while recording the third lowest share of offensive zone starts among forwards (46.76 percent; source: war-on-ice.com).  What it meant in terms of performance was that he and his most frequent linemates – Joel Ward and Jason Chimera – all ranked in the top four on the team among forwards in points per 60 minutes at 5-on-5.

Over the last two seasons Eric Fehr has remade himself into a reasonably reliable goal scorer, despite where he has been deployed.  Among forwards playing for the Caps in each of the past two seasons Fehr ranks sixth in goals per game (0.19, which works out to 16 goals per 82 games).  In fact, since his career best 21-goal season in 2009-2010, Fehr is fourth among forwards currently with the team in goals per game (0.23; minimum 150 games played).

Last season was a career high for Fehr in games played – 73.  The nine games he missed was a nine-game stretch in November in which he was a healthy scratch.  That might have been a product of his being a minus-8 in his first ten games of the season, although in one of those odd quirks that seemed to populate Adam Oates’ tenure as coach, Fehr was benched after he went 0-4-4, plus-3 in four games.

It is hard to find a lot to fault in Fehr’s game last season if it is placed in context.  He was put into a new position that he seemed to accept willingly.  He eventually came to play that position on what was not considered a scoring line, perhaps not what was envisioned when he was a prospect years ago.  He took to it as well as one could expect.  Which is not to say he is a long-term option at that position; his faceoffs might have been better (46.0 percent), and his assists/60 minutes at 5-on-5 (0.99) ranked tied for 80th among centers.  It was a good first year at the position, though, especially having to learn it on the fly.  It just might not be a long term solution.

The Big Question… Where will Eric Fehr play?

It seems unlikely that the Adam Oates experiment of making Eric Fehr a center will proceed in 2014-2015.  It does not mean that Fehr has a position waiting for him, though.  He could play on either side of the top two lines or provide some productivity for the fourth line.  He could, in a pinch, fill in at center on the third line, but that seems for the moment to be a fall-back position for the club.

Where Fehr plays might depend on how new head coach chooses to deploy Alex Ovechkin.  If Ovechkin is redeployed to left wing, where he played before Oates assumed the coaching responsibilities, Fehr could be a top line right winger.  If Ovechkin was on the right side of the top line, and Marcus Johansson was to move back into his top line left wing position, Fehr might be on the left side of the second line.

Eric Fehr has shown himself willing to play any role the team needs.  He has played all three forward positions and has played on all four lines in his eight seasons (over two tours) with Washington.  What he has not had in any of those eight seasons was a permanent home, a position he could call his.  Even last season, when he played primarily center, it seemed a stop-gap sort of move.  This season, at least to start, he seems to be once more a man looking for a steady role.

Whatever role he plays, it could be at a bargain.  Looking at comparables from capgeek.com in terms of age and value, Fehr is in the neighborhood of such as Cody McCormick, Mike Santorelli, Tanner Glass, Drew Miller, Nate Thompson, Jim Slater, and Gregory Campbell.  Fehr compares well to that group, especially given is adaptability and versatility.

Lurking there, though, might be a goal scorer yet.  As noted, Fehr has scored goals at a 16-per-82 game pace the last two seasons, and his is not far removed from a 21-goal season (2009-2010).  It might get him a look at a scoring line role or on the power play.  Whatever role he is asked to play, though, it seems Eric Fehr is ready to give it a shot.

In his first season with Washington Capitals, 2009-2010 being a partial one following his trade from the Columbus Blue Jackets, left wing Jason Chimera scored seven goals in 39 games, a 15-goal pace over 82 games.  The following season he had ten goals in 81 games.  A drop, yes, but still a respectable number for a bottom six winger.  Chimera hit the jackpot in 2011-2012, recording his first 20-goal season while playing in all 82 games.

Then, the bottom fell out of his production.  In the abbreviated 2012-2013 season, Chimera did not record his first goal of the season until his 28th game and finished with only three goals in 47 games.  Last season he rebounded to score 15 goals in 82 games on what was, on many nights, the Capitals’ most reliable, most effective line: Chimera, Eric Fehr, and Joel Ward.

Chimera’s 2013-2014 goal total was consistent with his career average with the Caps and overall (about 14 goals per 82 games), but underneath it all there has been a certain lack of consistency in recent years.

We have made a point over time that pairs might matter more than lines when it comes to forwards.  Nicklas Backstrom and Alex Ovechkin is an example.  Last yeaer, so was Jason Chimera and Joel Ward.  Chimera skated more with Ward than he did any other Capital forward last season, more than 80 percent of his 5-on-5 minutes.  When together in those situations, Chimera recorded more than a goal per 20 minutes with Ward.

Another odd number: 17.  Chimera had 17 of his 27 assists in wins last season.  That would not be so odd in itself but for the fact that he had only 6 of his 15 goals in 38 wins, 9 goals in 44 losses.  It was part of a season that reflected the importance of secondary scoring.  Chimera had five multi-point games last season, four of them coming in wins.  The 27 assists for Chimera was a career best, as were his 42 points.

Let’s draw a picture, ok?  If you look at his goals, assists, and points per game over his career, those years with the Caps start to look like a muskrat-tooth pattern at the end… 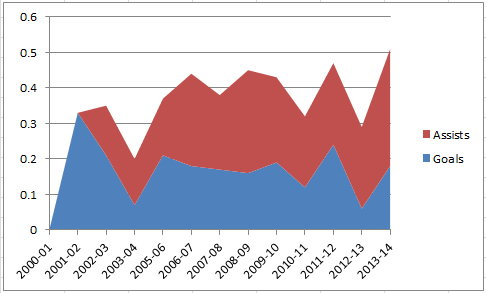 The Big Question… Can Chimera maintain the solid level of play he displayed last season?

Consider it asking Cheerless’ question in a slightly different way.  Start with this.  Absent a trade over the next three weeks, Jason Chimera will open the season as the Capitals’ oldest player (35 years old), the only player on the roster born in the 1970’s.  The number – 35 – is not insignificant. Last season, nine forwards age 35 or older played in at least 50 games, recorded 12 goals, and finished with 35 points:

This group is, by and large, primarily scoring line forwards, not the third line type into which Chimera might fall.  And, although we set the parameters at 12 goals, 35 points, and 50 games, the fact is that of this group of nine players, none had fewer than 18 goals, none had fewer than 40 points.  Those numbers are at the outer edge of Chimera’s career best performances – one season with 18 or more goals, one season with 40 or more points.  The extent to which Chimera can hold back the advance of time might be a significant factor in whether the Caps are successful this season.

Despite just four and a half seasons with the Caps, Jason Chimera will enter the season sixth among all players in games played with the Capitals (331).  He might be considered among the team leaders at this point based on longevity.  He also might be a bargain.  Entering the first year of a two-year contract with a $2.0 million annual salary cap burden, his comparables (in age and value, according to capgeek.com) might include Raffi Torres, Chris Neil, Travis Moen, or Matt Hendricks.  Based on last year’s performance, one might reasonably think Chimera is a bargain at that price, given his comparables.  At his performance level in 2012-2013, however, he is not a bargain.

And that is going to be the thing to watch with Jason Chimera as the 2014-2015 season unfolds.  His year-to-year consistency has been an issue since his arrival in Washington, and if his pattern holds, this season would be a “down” one for him.  The mitigating factor here might be in his partnership with Joel Ward.  Last season he skated those 80-plus percent of his 5-on-5 minutes with Ward to great effect.  In the previous season (the one in which he had three goals in 47 games), Chimera did not skate as many as 50 percent of his 5-on-5 minutes with any skater (he skated 42 percent of those minutes with Ward).

Aesop said that “familiarity breeds contempt.”  It might be that familiarity, though, both with his surroundings and his linemates, that would enable Jason Chimera to do it again and once more make him an important ingredient to the Caps’ success this season.