It was going to happen sooner or later to the Washington Capitals.  A losing week. It was a long time in coming, but the Caps went 1-2-0 in Week 5, their first losing week since Week 23 of the 2014-2015 season.  If you are counting, that was 34 consecutive weeks of hockey covering 102 regular season games without a losing week – 28 winning weeks and six break-even weeks. 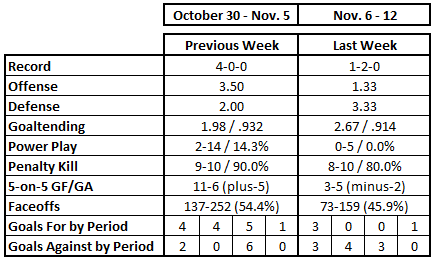 This week was a tough hand played by the Caps, facing the Stanley Cup finalist San Jose Sharks and the always difficult Chicago Blackhawks to open the week.  Even though the Caps got the Sharks at home, Verizon Center has been no home-ice advantage for the Caps against that team.  The 3-0 loss the Sharks hung on the Caps to open the week was the second straight shutout San Jose recorded at Verizon Center (they had a 5-0 win last season), and it was their sixth straight win on the Verizon Center ice sheet.  The Caps are now 1-10-2 on home ice against the Sharks in their last 13 meetings.

The Caps reached the .500 mark in their all-time record against the Chicago Blackhawks with their win at United Center (41-41-11-1) in the middle game of the week.  The 3-2 overtime win broke a seven-game Chicago winning streak and gave the Caps two wins in their last three visits to the Windy City.

That left the contest against the Carolina Hurricanes to close the week as the one that would leave the Caps with one more in their consecutive non-losing weeks streak or see it come to an end.  Things looked good on that score for about half a minute.  Actually, it was the 35 seconds between Evgeny Kuznetsov opening the scoring in the first period and the first NHL goal scored by Carolina’s Sebastien Aho.  Less than five minutes later, Teuvo Teravainen scored for the Hurricanes, and they never looked back in a 5-1 win to send the Caps to a losing record in Week 5 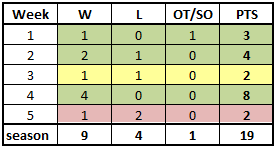 When half of the goal output comes from a fourth-liner, when neither the top line nor the intact third line records a point, it is not likely to be a fireworks kind of offensive week.  For the Caps in Week 5, it wasn’t.  Jay Beagle got the Caps to the end of regulation against Chicago with a pair of goals (one being the Caps’ first shorthanded goal of the season), and Marcus Johansson scored a 3-on-3 goal in overtime to get the Caps’ only win.  Other than that, it was Evgeny Kuznetsov potting just his second goal of the season in the 5-1 loss to Carolina.  If there is silver lining in this cloud of a week, maybe it is Kuznetsov breaking out of his scoring slump.

Two empty net goals (scored by San Jose and Carolina) and a 6-on-5 goal in the last minute of another game make the week look worse than it was as far as scoring defense was concerned, but it was not a good one, either. It was the game against Carolina that was most disappointing.  It was the second half of a back-to-back set of games, the Caps flying in from Chicago after the previous night’s win, but allowing a middle-of-the-road club in shots and goals per game to get off 38 shots and score five goals (one an empty-netter) qualifies as below par for a club among the leaders in fewest shots allowed and scoring defense.

Eighteen skaters were on ice for goals in Week 5, Daniel Winnik (in two games) and Taylor Chorney (in his first game of the year) spared a mark on their ledger.  In that regard, it was a rough week for Matt Niskanen, who had a closer view than most of six of the ten goals scored against the Caps for the week.  Two of them happened to be empty netters, but it still might not be a scrapbook week for Niskanen.

It is a bit early, it seems, to be getting into a rut, but the Caps allowed more than 30 shots on goal in consecutive games for the first time this season in allowing 34 to the Blackhawks and 38 to the Hurricanes.  Both of those games being on the road, the results opened up quite a difference between the shots per game the Caps are allowing on the road (30.4) and those allowed at home (23.3).

The goaltending numbers were better than the defense, and the goaltending looked better than the numbers.  As far as the numbers are concerned, they break into the Holtby set and the Grubauer set.  Braden Holtby got the first two games of the week, splitting the decisions with a 1.98 goals against average and a .929 save percentage.  In other words, given the standard he set over the past couple of seasons, a pretty average week.  Philipp Grubauer was dealt the “non-support” card off the bottom of the deck in the last game of the week.  The 37 shots he faced came within shouting difference of the total he faced in his two previous appearances this season (43).  He faced 31 shots on goal in the first 37 minutes of the game. Compare that to the 39 total shots Braden Holtby faced in the first two periods of two games to open the week.

Whatever adjective you care to use to describe the Capitals power play this week, “good” would not be among them. “Infrequent” comes to mind; they had just five power plays for the week, none of them in their win over the Blackhawks in the middle game of the week.  It was the first time the Caps went without a power play opportunity since last New Year’s Eve against Carolina.  Oddly enough, the five power plays only ties their lowest number of man advantages by week for the season (Week 3 had five power plays).  “Unproductive” would be another one.  They Caps had just nine shots on goal in 9:56 of total power play time.  Alex Ovechkin went without a power play goal on three of those shots.  He has just two power play goals on the season, both of them at home.  Dmitry Orlov had a pair of the power play shots, and the rest were split among Andre Burakovsky, John Carlson, and Marcus Johansson. The missing part there is nothing from the middle.  Justin Williams had 2:57 in power play time (all against San Jose), and T.J. Oshie had a total of 6:05 in power play ice time, but neither recorded a power play shot on goal for the week. 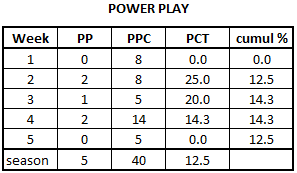 An 80 percent week, when two of the games are on the road, is not a bad week.  However, given the impotence on offense for the week, it just gets lost in the wash of a forgettable week.  It might have been a better week but for the game against Carolina.  The Caps faced six shorthanded situations against the Hurricanes, although three of them came in the last 14 minutes of a game that had largely slipped away from them.

Even with the lopsided nature of shorthanded situations faced relative to power plays, there was further evidence that the penalty killing is coming around.  Washington allowed only 11 shots on goal in 17:11 in shorthanded ice time.  And, one might make the case that the power play goals allowed were a matter of goaltending.  The Brian Campbell goal for the Blackhawks was a rocket from the point, but not an impossible shot to stop.  File that under, “sometimes you get the bear, sometimes the bear gets you.”  The other, a Jordan Staal goal in the game against Carolina, came on a rebound off the right pad of Philipp Grubauer that was put right on his stick.  How many times is he going to be in that position to cover that rebound?  Once was enough on Saturday night. 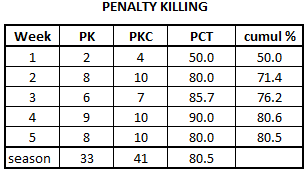 Was it a good week or a bad week in the circle?  Yes.  Huh?  Okay, more bad than good. Overall the Caps were under 50 percent, but it was not as bad as all that.  Washington finished 55.8 percent in the offensive zone and was just two draws under 50 percent in the defensive end (47.8 percent).  It was the neutral zone that sunk them, winning just 19 of 53 draws (35.8 percent).

Individually, the good-bad effects were felt up and down the lineup. No Capital taking at least ten draws finished over 50 percent for the week.  Jay Beagle was the only Cap to reach that mark (14-for-28).  However, of the four Caps taking at least ten faceoffs for the week, all of them (Beagle, Lars Eller, Nicklas Backstrom, and Evgeny Kuznetsov) all of them were 50 percent or better in the offensive end.  All but Eller were over 50 percent in the defensive end.  But those four were just 17-for-50 in the neutral zone (34.0 percent).

Week 5 for the Caps might be described as “one and (almost) done” as far as goal scoring by period.  Of the Caps’ four goals for the week, three of them came in the first period, the other in overtime.  As for the final 40 minutes of regulation, it was 0-for-54 shooting over three games.

The goals against was evenly split among the periods (3-4-3, with none in overtime), but those two empty net goals in the third period of the San Jose and Carolina games make the third period look worse than it was.  That other third period goal is one that should make no one feel good, though. The Caps were nursing a 2-1 lead over Chicago in the last minute when, with the Chicago goalie pulled for an extra attacker, a shot from the left point was muffled slightly by Brooks Orpik, squirted through the skates of John Carlson and eluded the Blackhawks’ Jonathan Toews to the far post to the left of goalie Braden Holtby.  The last person the Caps might have wanted to see there was Marian Hossa.  A player with as many games as he has in his career isn’t going to panic, and when the puck ricocheted off him and behind Holtby, it might have made for an even worse week than it was.  Marcus Johansson made sure it did not by getting the Caps an overtime goal to make them 2-1 in extra time this season, both wins in overtime, the loss in the Gimmick. 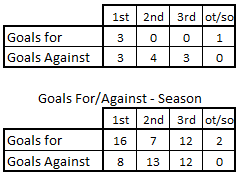 In three games, the Caps played up to an opponent (Chicago), down to an opponent (Carolina), and sideways to an opponent (San Jose).  It was a week in which persistent hiccups wouldn’t go away – a general lack of offense, an ineffective power play, but it was also one in which other troublesome elements appeared – lack of scoring line production, an inability to sustain pressure over three periods.  And after more than 30 weeks of hockey without one of them of the losing sort, it is a week that stands out. The object now is to keep it from being two in a row.

Posted by The Peerless at 11:29 AM No comments: