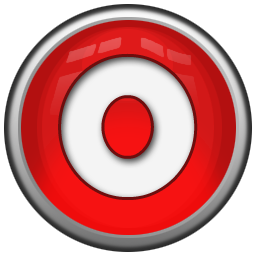 After a successful three-game home stand, the Washington Capitals took to the road last night to face the Montreal Canadiens at Bell Centre.  While the Caps were wrapping up their three-win homestand, the Canadiens were dropping a pair of games to the Boston Bruins, one by a 5-2 margin in Montreal, the other in a shutout at TD Garden, 4-0.

One would not have been able to guess these teams’ recent fortunes based on how they started the contest.  Montreal scored on their first shift when Erik Cole whacked in a rebound of a P.K. Subban shot.  They were not done.  The Canadiens would score on each of their next two shots.  Their second goal came at 3:22 when Max Pacioretty notched his third of the young season on a deflection of a Tomas Kaberle drive.  The third came when Tomas Plekanec picked Dmitry Orlov’s pocket and roofed a shot over goalie Michal Neuvirth’s right shoulder to make it 3-0.

Montreal made it 4-0 when Scott Gomez stepped out from behind the Caps’ net and snapped a shot past Neuvirth on the short side.  That goal ended Neuvirth’s night in favor of Braden Holtby.  The change in goaltenders did not have its intended effect.  Holtby allowed a goal on the first shot he faced, misplaying what looked like a harmless wrist shot from defenseman Josh Gorges through his five-hole.  Montreal had a 5-0 lead on only nine shots.  They did not score on any of the four shots they had to close the period, but the Caps skated off shell-shocked at being down 5-0.

The second period was plodding along with Montreal skating not to make a mistake and the Caps looking disorganized.  Things livened up, though, when either Troy Brouwer ran goalie Carey Price in his crease, or Brouwer was pushed into him by Gorges, depending on whose point of view you are listening to.  Price got up and threw several punches with his blocker at Brouwer, and Ryan White joined the fray in defense of his goaltender.  The skaters paired off, but except for a few shoves from Colby Armstrong and Jason Chimera, a larger brawl was avoided.

What the Caps could not avoid, though, was more damage on the scoreboard.  With Mike Green off for tripping, David Desharnais made it 6-0 when he wristed a shot past Hotlby at the 12:02 mark of the period.  The Canadiens added another power play goal late in the frame when Cole notched his second of the game off a feed from Subban, who also had the primary assist on Cole’s first goal of the night.  The 7-0 score would be how the period ended.

The Caps ruined Price’s shutout early in the third period when Roman Hamrlik scored on a drive that hit Josh Gorges skate in front and snuck under Price’s pads.  That would be all the Caps would get, though, and it would end the scoring for the evening.  The Caps five-game points streak to open the season came crashing to earth with a loud thud, 7-1. 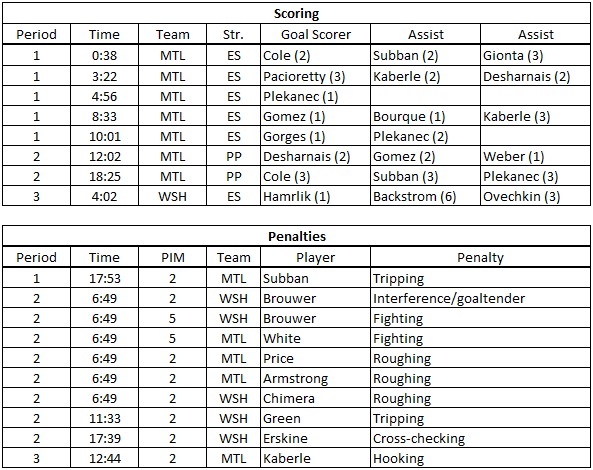 Posted by The Peerless at 3:46 AM No comments: