Washington, we have a "special" problem

We're getting down to it now, when the little things matter, and the subtle things take on special importance. Today's topic, the Capitals' "special" problem.

When you're comparing numbers "for" and "against," there are some things that are not a problem. For instance, the Caps are among the leaders in the ratio of goals scored at 5-on-5 to goals allowed. Their ratio of 1.14, is tied for sixth in the league.

But when we get to special teams, well...Washington, we've got a problem.

There are some underlying problems of both obvious and subtle nature that are picking away at their chances for success. The obvious one that screams off the page is penalty killing. At 79.5 percent, they are tied for 22nd in the league -- only Detroit is worse among playoff teams (that's not a misprint).

But dig under that penalty killing number -- and the power play one, too, for that matter -- and there is more.

Now, on the other side, no team in the NHL has found itself more times shorthanded than have the Caps -- 342 times in all. Think about that. The Caps have been shorthanded 50 times more than they have been on the power play (0.70 more per game). If the Caps were, say, 15th -- as they are on the power play opportunity ranking -- it would mean 11 fewer power play goals allowed, even at their relatively weak 79.5 percent penalty killing rate.

The combination of so many shorthanded situations faced with a weak power play compared to fewer power play opportunities with a strong power play is that for all the power play strength of the Caps, they have scored 72 power play goals while allowing 70, a "plus-2" outcome.

The Caps have to have a second-ranked power play just to keep up with other deficiencies in their special teams. In the end, special teams -- an inability to draw penalties and an inability to kill them off -- could end up being what dooms this team.
Posted by The Peerless at 11:20 AM 3 comments:

The Peerless Prognosticator is ON THE AIR!!! -- Caps vs. Panthers, March 17th

It’s the last back-to-back of the season – regular season, that is – as the Caps travel to Sunrise, Florida to take on yet another desperate team, the Florida Panthers, on this St. Patrick’s Day even—

The face is familiar, but…I’m not quite placing it…

“Aye…me parents wanted to name me ‘Seamus,’ but dey messed up the birth certificate. You know how bright our side o’ t’family is.”

Yeah, Fearless and Cheerless have been by a few times.

Actually, we have a hockey game tonight.

Hockey has no borders, cuz.

“And Mike Green…now dat’s a fella who probably sprang from the sod, himself.”

“And tell me, Peeeeerless, who is ‘Shaone Morrisonn?’ His name is ahll right, but who spelt it fer ‘im, an Englishman?”

He’s from BC – British Columbia.

“Ahh…now I get it. British Columbia.”

OK, OK, let’s not start that…so, have you seen a hockey game?

“Can’t say dat I have…we don’t have much in de way of ice in Ireland, but we do have hurling.”

We have that here, too…usually after a few too many Guinnesses.

While Seamless (“Shameless” to you and me) ponders the intricacies of hockey, we’ll take a look at the Panthers, the latest in a parade of desperate teams to skate against the Caps. In fact, Florida has started to slip uncomfortably of late. Since putting together a modest three-game winning streak in February, the Panthers are 6-6-2 in their last 14 games and have managed only once to put together consecutive wins (against Washington and Atlanta to start March). They are currently on a three game losing streak (0-1-2, both of the extra time losses coming in Gimmicks). Their overall numbers look like this... 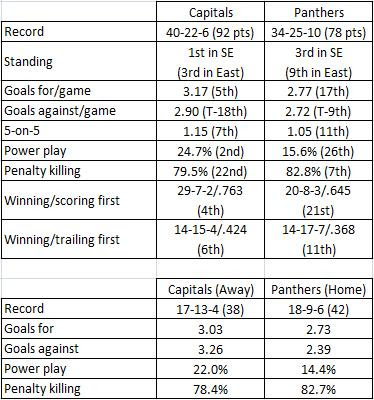 In those last 14 games, the Panthers have been outscored by the opposition to the tune of 43-36. Their special teams have performed at or near their season-long levels of production – the power play at 15.7% (eight-for-51) and the penalty killers at 86.5% (45-for-52).

What has taken a turn of sorts is the production of The Florida defense. First, there is the matter of Tomas Vokoun in goal. He won those three consecutive games in February against the Maple Leafs, Hurricanes, and Rangers. Since then, though, he has had a real fetish for giving up three goals a game. He’s done it seven times in ten games (he has a four-goals allowed game and two shutouts to complete the body of work). All told, he is 4-4-2, 2.47, .930 in ten appearances over this 14-game span. What is remarkable in those games is that Vokoun has faced a lot of shots – more than 35 per 60 minutes – and he has faced more than 40 four times (he is 1-2-1 in those games).

Craig Anderson got four consecutive appearances in the middle of the 14 game run and was rather inconsistent. He allowed six goals (loss), one goal (win), seven goals (loss), and two goals (win). Might be a good thing for the Caps if he starts…you can see the pattern.

Meanwhile, the skaters have managed to put up more than two goals only six times in those 14 games, although they have achieved it in each of their last four games (three of them losses, oddly enough).

The skaters are led in scoring by Stephen Weiss, but he seems to have dried up lately. In his last five games he is 0-2-2, -1, after a four-game span in which he was 1-6-7, even. Weiss has, however, had a successful campaign against the Caps this year. In four games he is 1-4-5, even. Those five points have come in the last two games for Weiss.

David Booth, on the other hand, has not dried up lately. He is 5-4-9, +2, in his last four games, with three power play goals. He leads the Panthers in power play tallies this year (nine). And, in keeping with this idea that he’s been the mirror image of Weiss in terms of performance, Booth hasn’t yet registered a point against the Caps this season in three games. For his career, he is 2-2-4, -1, in 17 games against Washington.

You might think that at this time of year, the Panthers might benefit in their push toward the playoffs with contributions from a veteran like Cory Stillman. Stillman has sort of puttered along of late. Since a 4-2 Caps win on February 15th Stillman is 2-4-6, +3, in 10 games. But he is almost a point-a-game player against the Caps over his career (11-22-33 in 35 games). He’s kept that up this year with a pair of assists in two games against Washington.

Jay Bouwmeester is still a Panther. What he hasn’t been lately is a difference-maker. In five games since the trading deadline, during which time the Panthers are 1-2-2 and have allowed 16 goals, Bouwmeester is 0-1-1, -1. Despite being fifth on the club in goals (tops among Florida defensemen), he has one in 18 games since February 5th – against the Caps on March 1st.

With Nathan Horton out with a severed tendon in his finger, taking his 19 goals and 19 assists with him (fourth in overall Panther scoring), Frolik needs to pick up some slack. He got a slow start on that, failing to get a point in the first two games after Horton left the lineup. But he had a goal and an assist against Tampa Bay last Saturday. He is 2-2-4, +2 in four games against the Caps this year, with goals scored in each of his last two games against Washington.

You think he’d like to get on the ice tonight as fast as he can to erase the memory of last night? Poti was on the ice for all five Atlanta Thrasher goals in a 5-1 loss. With Mike Green sitting out a second game in a row a possibility, Poti could be called upon to be the quarterback of the Caps’ power play (0-for-4 last night). Poti has only two power play points this year (both assists), which isn’t exactly surprising when you notice that he has received 1:32 in power play ice time per game (Mike Green gets 5:29). But Poti isn’t a stranger to running a power play. It would be nice if he could summon up some memory here. And let’s just say that being on the ice for three power play goals…if that gets repeated, well…so will last night’s result.

You’d like to say that the Caps rebound well from such drubbings as that suffered at the hands of the Thrashers last night. The fact is, they don’t. The Caps are 4-6-1 in games following losses by at least three goals this year. That number three keeps coming up – that being the recent Vokoun fetish concerning goals allowed. It would be tempting to pick Vokoun to get his third shutout in his last ten games by a 3-0 score. But we don’t do that here. This being St. Patrick’s Day, we’re thinking of four-leaf clovers…