The Peerless Prognosticator is ON THE AIR!!! -- Game 75: Jets at Capitals, March 23rd

Didn’t we just do this guys?

“No, cousin, I think he means ‘play Winnipeg.’”

“Ain’t that a thing you put on a horse to sit on?”

Yeah, you go get a subtle and go for ride…

It was quite a ride last night…an Ovechkin goal in the first minute, lots of big saves at both ends, a dekey-do from Matt Hendricks in the Gimmick, and… a loss.

The Washington Capitals have to pick themselves up, dust themselves off, and start all over again. Only tonight, it matters. A lot. By failing to pick up the additional point in last night’s 2-1 trick shot loss to the Philadelphia Flyers, the Caps find themselves only one point ahead of the Buffalo Sabres for eighth place in the East, and they have only a five-point lead over the Jets, who have a game in hand against the Caps. If Winnipeg wins, and Buffalo wins, things will get dicey for the Caps right quick. Not only will they have fallen to ninth place, but Winnipeg will have closed to three points with that game in hand. The Caps will still hold a wide edge in the first tie-breaker – regulation plus overtime wins – but the margin for error will be gone.

But about this game. Since the Jets beat the Caps by a 3-2 margin in Winnipeg last Friday, the Jets have lost two in a row and have done so in an especially ugly fashion. First, they lost to Carolina on home ice, wasting an opportunity to narrow the gap with eighth place against a team below them in the standings and on an ice sheet where they had lost only ten games in regulation. That was a mere warm-up for an 8-4 shellacking at the hands, sticks, skates, and other sundrie notions of the Pittsburgh Penguins on Tuesday. At least the Jets have had time to think about their place in the scheme of things.

Here is how the teams compare at the moment: 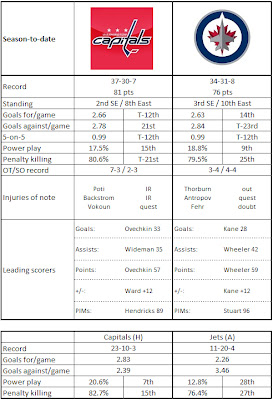 1. Maybe it’s a Pittsburgh thing. The Jets have allowed eight goals to the Penguins in each of their last two games, dropping an 8-5 decision on February 11th.

3. Winnipeg has played 73 games this season. Only one defenseman has played in more than 60 of them – Mark Stuart.

5. Remember this number…80. It is the number of third period goals allowed by the Jets, and only three teams have allowed more.

1. The Caps are one of three teams in the league with two defensemen in the top ten in giveaways (John Carlson, who leads the league, and Dennis Wideman). Not the kind of top ten you want to be on.

2. On the other hand, Dennis Wideman is in the top ten among defensemen in power play scoring with 20 points (tied for eighth).

3. Only one Caps defenseman is in the top-50 in the league in minor penalties taken (Wideman, 48th).

5. The Caps have only five goals from defensemen in intra-divisional games this season. John Carlson has two; Wideman, Orlov, and Mike Green have one apiece.

Ondrej Pavelec has allowed five goals in four of his last 11 appearances. Yet, he is still 5-5-1 in those appearances. Since holding the Caps to a pair of goals in the 3-2 win last Friday he has allowed nine goals on 59 shots (.847 save percentage). His road record has been something less than something to behold – 8-15-4, 3.50, .893. The Jets are going to need more from him down the stretch with six of their last nine games on the road.

One wonders, had he been in last night’s game, might the Caps have come away with an extra point, either as a product of his offensive skills in regulation or his creativity in the trick shot phase? That is in the past, but Semin is going to have to make his presence felt in these last eight games for the Caps. He has 20 goals in 36 career games against the Thrashers/Jets, including a goal in each game played against the Jets at Verizon Center this season.

In the end, the Jets cannot lose this game. They do, and they lose contact with eighth place for good, falling seven points behind the Caps with eight games to play and all those road games coming up. The Caps are almost as desperate. A loss and a Buffalo win tonight against the Rangers, and the Caps fall behind the Sabres, setting up a huge game on Tuesday. Any way you slice it, this is as “playoffy” as a regular season game gets. 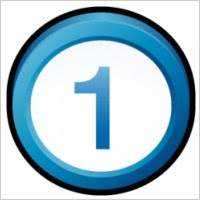 It wasn’t your fault, Braden.

Washington Capitals goalie Braden Holtby took things on himself last night after the Caps fell to the Philadelphia Flyers in a Gimmick, 2-1. After allowing two goals in four rounds of the trick shot competition, Holtby said:

"That was terrible. Those two goals aren't even good goals for the players to score. Those just shouldn't go in. The shootout we should've won 1-0. All I can really do is look at it tomorrow and make sure I improve on it."

Caps fans might be forgiven for thinking it would never have come to that, give the way they started. Alex Ovechkin scored his 33rd goal of the season and sixth in five games just 26 seconds into the game on the game’s first shot. It was the product of an aggressive play on the part of Brooks Laich to challenge Flyers’ defenseman Braydon Coburn in the corner to goalie Ilya Bryzgalov’s right. Coburn coughed up the puck with Ovechkin right there to pick it up. He carried it to the net, and after some pinballing – him off defenseman Nicklas Grossmann and the puck off Bryzgalov’s stick – the puck came back to Ovechkin’s stick. He made short work of it, snapping the puck past Bryzgalov less than half a minute in, making Caps fans think it might be a good night.

But that was it. Bryzgalov stopped the last 30 shots he faced in the hockey portion of the show, Claude Giroux got the goal back for the Flyers on a defensive breakdown and a pretty curl and drag, and it was left to Bettman’s folly to settle things.

-- Maybe it’s a practice thing. Going into this game no team in the league participating in fewer fun house follies than the Caps. Only five times this season had Washington participated in the shootout, going 2-3. Only three Caps had recorded scores, and one of them didn’t dress for this game (Alexander Semin, who was 1-for-4 shooting). Only Matt Hendricks and Alex Ovechkin had recorded goals so far this season. Hendricks scored, Ovechkin did not. Neither did Keith Aucoin or Troy Brouwer – both taking their first trick shots of the season – and that was that.

-- Claude Giroux is a shifty sort of skater, but he is not exactly a guy with speed to burn. He sure did give that impression though with the way he abused Dennis Wideman on the Flyers’ goal. Can’t hang that one on Holtby, either, even considering Holtby’s high-risk, high-reward move to try and poke check the puck off Giroux’ stick.

-- How many times do you see a team miss a chance at one end, only to see the puck go in the back of the net at the other end? Moments before the Flyer’s scored, the Caps could have put the home team in a deep hole, but the Caps hit a pipe, the Flyers got the puck, and things took a turn.

-- Then there was the adventure of Marcus Johansson 13 minutes into the second period. He got to a loose puck at the Philadelphia line and outraced Matt Carle into the Flyers’ zone. Carle could only swipe at Johansson, bringing him down as Johansson was about to take his shot on Bryzgalov. A penalty shot was signaled, and Johansson had a second chance to break the tie. It was also a second chance for a Flyer to haul down Johansson, as it turned out. As Johansson closed in on Bryzgalov on the penalty shot, Bryzgalov stuck his stick out to poke check the puck and got Johansson’s skate, tripping Johansson as he was about to cross over for the shot. As he was falling, Johansson tried to sweep the puck behind Bryzgalov into what was an open net, but he missed, the puck slid into the corner, and the chance passed by.

-- Or Mike Green just over 16 minutes into the second…when he called back to the old days and pinched in on the weak side of a play, took a pass, fired, and… Bryzgalov made a fine glove save.

-- The guy who got the game-deciding goal – Wayne Simmonds – did not have a shot on goal in the hockey portion of the game. Game’s second star? Only in Bettman land… or Philadelphia.

-- We might have been tempted to think Claude Giroux deserved that second star, until we noticed that he was charged with five giveaways (the Caps had three as a team).

In the end, if the Caps had done more with the rest of their season, one could feel pretty good about holding the number three offense in the league to one goal on their ice. But the Caps didn’t do more with the rest of their season, and that point left on the table could be huge in the end. They certainly had their chances to pick it up. Bryzgalov played well, but the Caps missed chances, too. Chance they had better not miss when they come back home to Verizon Center tonight in what is now a “cannot lose” game.
Posted by The Peerless at 4:01 AM 1 comment: