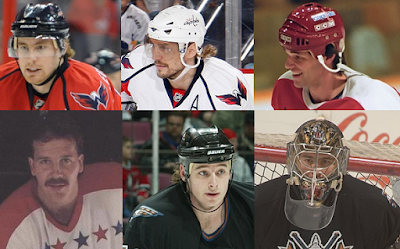 Looking back at the “All-Alphabet Team” for the Washington Capitals as part of our Peerless Playback during the Pause is now up to the letter “F.” Are there players that merit replacement?  Are we good with the original 2014 lineup?  Let’s take a look.

Coming up with an “All-F Team” is no easy feat.  There have been only 19 skaters in team history whose last name begins with the letter “F.”  It is a group of skaters that includes two Ferraro’s (twin brothers Chris and Peter) and two Forbes (Colin and Dave).  It includes two of the longest last names in Caps history (Lou Franceschetti and Tomas Fleischmann) and one of the shortest (Rico Fata).  It includes a Hall of Famer, albeit past his prime (Sergei Fedorov), and five players who dressed for fewer than five games with the Caps (the aforementioned Ferraro’s, Alex Forsyth, Larry Fullan, and Owen Fussey).

The group we chose in 2014, listed above, combined for 786 games with the Caps, posting 111 goals and 296 points.  It suggests that there would be room for replacement.  However, this is another letter of the alphabet that suffers from a lack of new options.  Only two skaters since the original roster was published in 2014 with a last name beginning with the letter “F” have skated for the Caps.

One – defenseman Martin Fehervary – has only six games of experience in the NHL.  At some point, he could be a replacement, but we will hold off on that.  It is the other skater, though, who merits consideration as a replacement.  Eric Fehr might have been a better choice at right wing on the 2014 squad than Lou Franceschetti.  Through the 2013-2014 season he had more goals (70 to 36) and more points (144 to 94), although he did play more games (379 to 327).  The difference might be that Fehr, a former first round pick famously (among a number of Caps fans) taken one spot ahead of Ryan Getzlaf in the 2003 Entry Draft, was something of an underachiever whose career suffered a number of setbacks due to injury.  On the other hand Franceschetti, a former fifth-round draft pick by the Caps, was an overachieving fan favorite with a feisty streak.  Since 2014, Fehr added 19 goals and 33 points in 75 games, and we lean toward including him as the lone replacement among the skaters on “All-Team F.”

In goal, the Caps have never had a player dress for the club whose last name begins with “F,” hence the inclusion of Frederic Cassivi and his asterisk, the only goalie in Caps history whose first name begins with that letter.  Having dressed for only five games with the club, and doing so without having won a game, a replacement would seem certain.  Well, except for the fact that in the years since the 2014 All-F Team was published, there have been no “F” goalies.  The best we can do is another asterisk – Pheonix Copley.  In his lone season with the club, in 2018-2019, Copley appeared in 27 games and posted a 16-7-3, 2.90, .905 record with one shutout.  He becomes the new goaltender on our “All-Team F.”

It goes to show that with a bit of ingenuity and a willingness to stretch the rules in the name of pronunciation, we can still cobble together teams by the letters.