Hockey at The Big House? 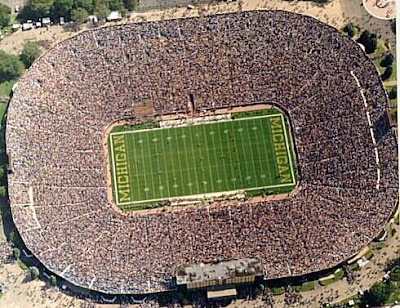 The Michigan Daily reports that a rematch of 2001's "Cold War" between the University of Michigan and Michigan State University could be in the offing...

"...the long-awaited “Cold War II” matchup, this time at Michigan Stadium, is expected to be officially announced “in the coming days,” according to an Athletic Department official, who wished to remain anonymous because an official announcement has yet to be made. With the two teams scheduled to meet next season on Dec. 10 and 11, the outdoor game is widely believed to take place on Dec. 11."

Having attended both of those fine institutions (ok, Michigan sucks), we're already circling that December date on the calendar.

Thanks to Forechecker for pointing the way to finding this.
Posted by The Peerless at 9:25 AM 1 comment: 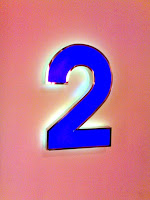 It was over in the blink of an eye, like a fireball consuming everything around it.

For 40 minutes the Washington Capitals and the Anaheim Ducks traded shot-making dominance, the Caps opening the game outshooting the Ducks 14-3. Then the Ducks outshot the Caps 16-5 to knot the shots at 19 and the goals at one apiece. Then the Caps closed the second period outshooting the Ducks 16-6. The game was still tied at one apiece, goalies Michal Neuvirth and Jean-Sebastien Giguere keeping their teams in the match.

Then, in a space of 2:30, the competitive portion of the evening was over. Wes Johnson could barely get the names of the scorers out of his mouth when another goal was scored – three in all in that 2:30. Shaone Morrisonn banking a shot from out near the blue line off Steve Eminger for the first goal, Mike Knuble converting a pass from Alex Ovechkin – and a bouncing puck at that – to net the second one, and Alexander Semin finished the three-fer by taking a long feed from Brooks Laich behind the Anaheim defense and roofing a backhand past Giguere.

All that was left were two things… one, whether the Caps would get their fans a free order of wings from a local establishment by getting the fifth goal (they did, on Semin’s second of the game)… two, whether Ducks coach Randy “Stuck in ‘ought-seven” Carlyle would have the Ducks goon it up after things got out of hand (they did).

-- After Semin scored to make it 4-1, the Ducks finished up the game taking four roughing minors, a slashing minor, and a fighting major penalty. In 2006-2007, the rough stuff was a tool to tenderize teams so that the Ducks’ talent could take over. This was just some pathetic nonsense that was a twisted waving of the white flag.

-- Michal Neuvirth had 30 saves. On 15 of them he froze the puck for a faceoff. The Caps won nine of the resulting 15 faceoffs. A formula that works.

-- At least it works better than four giveaways, which is what Neuvirth had for the evening.

-- The Caps out-attempted Anaheim 81-59. A lot of that was Nicklas Backstrom, who is nearly impossible to: a) keep from getting a stick on a loose puck, and b) next to impossible to separate from the puck once he has it on his stick. Eight shot attempts and an assist for 19 tonight.

-- If fans get free wings for five goals, what might we get for 50 shots? The Caps finished with 49, every skater in a red sweater getting at least one, save for Jason Chimera.

-- Spreading things around, part one: 14 of 18 skaters for the Ducks were in minus territory.

-- Ryan Getzlaf… three minor penalties, minus-1, one shot on goal, lost ten of 17 draws. They coulda had Fehr!

-- Spreading things around, part two: four multi-point games tonight, including the second one by Shaone Morrisonn in four games.

-- Alex Ovechkin was credited with only two hits? There seemed to be a fair number of Ducks bouncing off him over the 60 minutes.

-- As lopsided as the final result was, this game might have been over early, but for 12 missed shots by the Caps in the first period.

-- This win is the Caps’ 11th of the month, tying the franchise best for wins in January.

-- Starting with the Caps 2-0 win over Buffalo on the day before Thanksgiving, the Caps are 22-7-0 (and that includes a three-game losing streak). They’ve outscored opponents over that span by 120-73.

-- In those 22 wins, Jose Theodore has 11, Michal Neuvirth has seven, and Semyon Varlamov has four.

-- If we told you Eric Fehr led the Caps in power play shots, would you be surprised? Well, he did (four). He had six shots overall in 12 minutes of ice time, plus a double minor for roughing. Busy fellow.

-- Bobby Ryan is a pretty sturdily built young man. He was crumpled like an empty can of Schlitz by Alex Ovechkin near the Anaheim bench. Not quite like trying to practice your step-over wrestling moves on Mike Green, is it, eh Bobby?

-- Does Ovechkin’s goal count as his third straight empty-netter?

-- It’s good to be the Captain’s buddy… Alexander Semin is 11-10-21 since Ovechkin became captain.

-- It’s good to be the Captain’s wingman… Mike Knuble has nine goals since Ovechkin became…oh, you get the point.

-- The Caps have five players at plus-20 or better. There are only 15 such players in the entire league (Vancouver has four of the rest).

The last time the Caps won eight games in a row, Alex Ovechkin was three years old (March 1989). It’s been a while. And it’s been a while since the Caps were this good. And they are getting contributions from everywhere – five points in four games for defenseman Shaone Morrisonn, a goal from John Erskine the other night for the first time in 109 games, a solid goaltending performance for Michal Neuvirth, who kept the Caps in this one until the guys could find the net with the fusillade they were unleashing on J-S Giguere. There is only one thing to do in the midst of all of this…