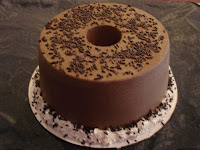 The best that can be said of that embarrassment is that there are just some games you’re not going to win, and the Caps certainly weren’t going to win this one…not the way they played. And that means that the worst one can say of this was that they just weren’t in much of a mood to play hockey. You could point to Sergei Fedorov and Mike Green being out, Brian Pothier being in after a 14-month absence, and the team having a lack of flow on offense, but that won’t explain the job the penalty killers did. They should return their pay envelope for this game.

Getting beat is not a sin. But getting outworked, outhustled, and outhit (save for an angry Alex Ovechkin) by a team that that took the ice with a two inch and ten pound disadvantage per skater…that just isn’t part of the excuse manual.

The Caps got into a running around contest with the Thrashers early, and never found much structure to their game until the third period, by which time goalie Kari Lehtonen had long established that he was in a groove, and even if he wasn’t, it was far too late to eat into a 4-0 Atlanta lead that the Thrashers built over the first 40 minutes.

Atlanta had nine shots on goal on their first four power plays, resulting in three goals. And this was a team without Ilya Kovalchuk.

Tom Poti had perhaps his most unfortunate, if not his worst night as a Cap. Asked to assume a lot of the role of Mike Green, he was on the ice for each of the first four goals scored by Atlanta. Then he had a terrible turnover at his own line that led to the last Atlanta goal in the third period.

As for Shaone Morrisonn, he was on the ice for each of the first four goals, too…he didn’t have the excuse of having to assume a bigger role.

If you’re tracking such things, that’s 12-5, Thrashers, in two games at Philips Arena. And, they are 6-for-13 on the power play (46.2 percent). That’s pretty good against air. The Caps have one more visit – April 7th.

- And did Tom Poti kill Keith Jones’ dog or something? Jones was relentless in his criticism of Poti on the Versus telecast, even well after the game was over. OK, it was largely deserved, but Keith, it probably wasn’t the worst performance in the NHL this year.

The lie of numbers…

- If someone showed you the final scoresheet and pointed out that the Caps outshot Atlanta, 50-25, would you think the Caps lost by four goals?

- If you saw that that the Caps out-attempted the Thrashers 83-38, would you believe that the Caps converted only one of those 83 attempts?

- If you were told that Alex Ovechkin had 20 attempts by himself – 10 shots on goal – would you believe he was shut out on the scoreboard?

- Or if Alex Semin had nine attempts, that he had the same result?...or eight for Milan Jurcina, ditto?

- Someone keep the faceoff results away from the Caps’ centers. Boyd Gordon – oh-for-six…Nicklas Backstrom – two-for-10…David Steckel – one-for-four…Michael Nylander – four-for-11. That’s seven-for-31. The team was 21 up and 39 down. Brutal.

- Has there been a better waiver wire pickup in the NHL than Rich Peverley? He had a really solid game, despite not netting a goal of his own. He’s 10-15-25, +10, in 27 games since joining the Thrashers.

- Eight hits? Eight? It looked like Ovechkin had that many in the last ten minutes of the second period.

- Tell me you had Zach Bogosian leading the Thrashers in shot attempts (seven)…ok, tied with Todd White.

- Ovechkin had as many misses as Bogosian had attempts. He was launching them from everywhere to try to get the Caps jump started.

Even though the Caps launched 50 shots on goal at Kari Lehtonen, they rarely got rebounds (Lehtonen did a fine job of redirecting or smothering them), and a lot of shots ended up in Lehtonen’s leg pads, suggesting an inability to get high shots on net (when they did shoot high, it was over the net).

And, there is the matter of the secondary scoring. Ovechkin, Semin, and Backstrom aren’t going to score every night. And when they didn’t tonight, there wasn’t anyone to pick up the slack. It’s been that way for a while now, and it is troubling.

Yanking Jose Theodore after giving up four goals on 19 shots in 33 minutes sets up an interesting scenario for tomorrow. One might have thought Simeon Varlamov would get the call tomorrow night in Florida, but does Coach Bruce Boudreau put Theodore back in the saddle tomorrow and give the rookie the start in Tampa on Thursday?

OK, we get it…Fedorov was held out, Green was held out. If it was the playoffs, we expect they probably would have played. But their absence unmasked a certain delicate balance the Caps seem to have, not to mention questionable depth (or at least some inconsistency) in important roles. No one could step in and win a draw (any draw), despite having – we’re told – two of the better faceoff men in the league. And no one could step in to even assume a faint echo of the role Mike Green plays. Brian Pothier could not be expected to assume that role, not with 14 months of rust. For the moment, he’s just out there to become re-acclimated to the speed of NHL games. Tom Poti has struggled with intermittent injuries this year and has never really been called upon to be the all-things in all-situations defenseman Green was becoming.

The Caps played a thoroughly acceptable game…after the first 35 minutes. But that’s really the definition of closing the barn door after the Thrasher got out. Those first 35 minutes the Caps looked slow and unengaged as the Thrashers were abusing them on the power play. How a team with that sort of size disadvantage could do such a job of screening Jose Theodore is mind-boggling.

The Caps could have taken over second place in the East with a win (although New Jersey would have had three games in hand). It was a lost opportunity. We’ve been saying that more and more lately, and it has an uncomfortable sound to it.
Posted by The Peerless at 10:22 PM 3 comments:

The Peerless Prognosticator is ON THE AIR!!! -- Caps vs. Thrashers, March 16th

Monday…back to work. Tonight, it’s a visit to Atlanta to take on the Thrashers, a team playing out the string, counting the days, watching the calendar instead of the box scores…

“That’s right, cuz. And I wouldn’t be talking the Thrashers down too much.”

They’re 30 points behind the Caps.

“Yeah, and we don’t remember that the Caps once played a team in the playoffs it finished 29 points in front of in the regular season…and lost?”

That was more than 20 years ago, cuz…doesn’t the statute of limitations apply?

“It never applies when a dose of reality is needed.”

“…laid a seven-spot on the Caps already this year.”

"…they’ve played the Caps close in two other games."

OK, OK! You win, the Thrashers are the reincarnation of the 1978 Canadiens.

“Fine…by the way, how’d the Car-Wash go the other night? You get a lot of cars come in?”

Let’s get to the game. The Thrashers have, in fact, won five in a row, including three over Western Conference teams – Calgary, Colorado, and Edmonton, none of which were beaten by the Caps this year …a fact by itself that should cause Caps fans worry.

Comfort, though, might be found in the overall numbers, which paint an Edvard Munch portrait for Thrasher fans… 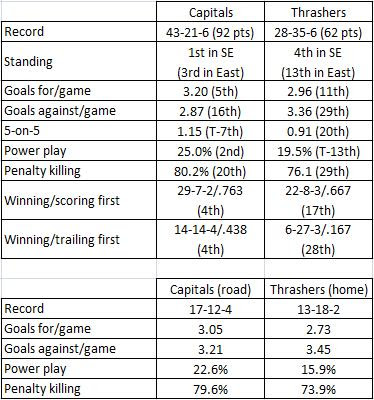 In those five straight wins, the Thrashers have outscored their opponents by 17-8. And, they’ve done it with balance. Ten players have scored those 17 goals, and 17 skaters have points.

Kovalchuk is the Ferrari that has been running with sand in its gears for much of the season. In 53 games through February 6th, he was 21-29-50, -16. But in 15 games since then, he is 15-13-28, +7, and he has climbed to seventh in overall scoring in the league. For the season, he is 1-4-5, even, in three games against the Caps. For his career against Washington, he is 21-28-49, +12, in 40 career games. However, Kovalchuk aggravated the perilous “upper body injury” in a game against Edmonton last week and missed Saturday’s 4-3 Gimmick win over Buffalo. It isn’t certain whether he will play tonight or not.

Bryan Little and Todd White are a couple of guys who seem to hide in the weeds, and when you look up, they’ve pinned a goal and an assist on your goaltender. Little has been on something of a mini-run since mid-February. In his last 13 games, he is 8-5-13, +3, with a game-winning goal against Montreal on March 6th. He’s done his part against the Caps this year, too, posting a 2-3-5, plus-1 line in three games.

Meanwhile, White – the Thrashers’ second leading scorer – has been setting things up nicely for Atlanta while getting the occasional goal of his own. In his last 13 games, he is 5-11-16, +5. He, too, has found success against the Caps this year, going 2-4-6, even, in three games. Given his 7-12-19, +8 mark in 21 career games against the Caps, you’d think he’d merit some attention.

On defense, Zach Bogosian might have gotten a slow start to his rookie season, losing more than a month earlier in the year to a broken leg. But since returning to the lineup on New Year’s Eve, he is 5-6-11, +10 in 26 games. He’s also shown a propensity to shoot more in recent games, with 14 shots on goal in his last three games (two goals).

Slava Kozlov has had something of a odd season. He’s roughly on a pace to finish with 70 or so points, which would not be unusual for him (he’s topped that mark five times in his career, including two of the last three years). But he’s also on a pace to finish -20, which would be his worst career finish, no small feat considering he’s been -10 or worse in three of his last five years. Defense doesn’t appear to be his thing. He has perhaps no peer, though, in the Gimmick. For his career he is 22-of-38 (57.9 percent) in the trick show portion of the competition, including five-of-six this year. If it comes to that, it would seem the Caps would need at least two to win.

It’s not “if,” it’s “when.” 50 goals, that is. And when would seem to be tonight. Ovechkin has abused Atlanta goaltenders as he has perhaps no other. In 27 career games against the Thrashers, he is 23-22-45. One of his three hat tricks this year is against the Thrashers, although that was at the expense of Ondrej Pavelec, not Kari Lehtonen. That’s ok…he has one against Lehtonen, too, turning the trick when he scored six seconds into overtime on December 15, 2006.

Don’t be looking at Atlanta’s overall record. Yes, they’ve had their troubles, and fundamentally this is not a very good hockey team. But they can put the puck in the net, and Lehtonen is capable of whipping up a superior performance. It is a team that is looking for its franchise-best sixth straight win. So, take them lightly at your peril, guys. In the battle of who is first to six – Atlanta’s winning streak overall or Washington’s road winning streak (they haven’t lost a road game in regulation since January 20th), guess who we like?