Capitals vs. Penguins: Takeaways and Throwaways from Game 5 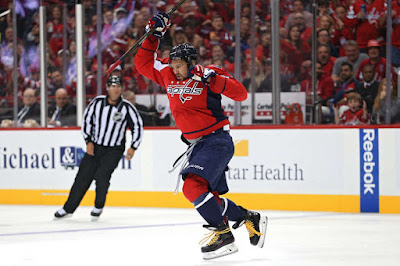 Game 5… Over the course of the history of the Washington Capitals, it has often been a curse, a demon mocking the club over early playoff series success that would melt into disappointment in the end.  Against the Pittsburgh Penguins in Game 5 of their Eastern Conference semifinal series on Saturday night, the Caps tried to write a new chapter in their postseason history.  It was a Game with its own takeaways and throwaways.

Game 5 was the 13th time in Capitals history that they won a playoff series Game 5.  In the 12 previous instances, the Caps won nine of the series (in three of those series wins, the Game 5 win was the series clincher).

This was T.J. Oshie’s third multi-point game of the postseason, the third time in which the Caps won.

Alex Ovechkin’s playoff reputation has taken its hits over the years, but with the goal he scored in this game, he ranks first in goals scored per playoff game (0.49) among 162 skaters appearing in at least 50 postseason games since the 2008 playoffs.

Penguin goalie Matt Murray was pulled off the ice with 3:15 left in the game.  The Caps allowed one shot on goal in that time, a 61-footer (officially) by Kris Letang with 2:43 left.

This was the 35th playoff game in his career in which Alex Ovechkin scored a goal.  The Caps are 21-14 in those games, perhaps not as dominating as one might think they would be.  It emphasizes the need for secondary scoring, which the Caps got in this game, from Oshie and Justin Williams… the two players the Caps got last summer with this in mind.

Nicklas Backstrom had an odd game.  He missed on all four of his shot attempts, but he did finish with two hits, two takeaways, a blocked shot, and ten wins in 18 faceoffs taken, along with an assist on the Ovechkin goal.

One would have thought coming into this series that the pace and less physical nature the Penguins present (compared to that of the Philadelphia Flyers) would have been more to the liking of Evgeny Kuznetsov and Andre Burakovsky.  Both were held without a point in this game, and they have combined for just one goal (Burakovsky) and one assist (Kuznetsov) in this series.

The Caps allowed a power play goal for the first time since Game 4 of the first round series against the Flyers.  It broke a streak of 24 straight power plays killed by the Caps.

Daniel Winnik had a curious night in terms of ice time. He had one more shift (13) than Tom Wilson (12) and just one fewer than Mike Richards (14), but his 5:36 was by far the lowest on the team (Wilson had 7:20).  The noteworthy part of it was that four of Winnik’s 13 shifts were less than ten seconds.

This was the ninth time that the Capitals and Penguins played each other in a Game 5.  In the previous eight, the Caps lost at home, they lost in Pittsburgh.  They lost by multi-goal margins, they lost in overtime.  The common thread was, they lost.  Eight games, eight losses.  Until Saturday night.