The Washington Capitals parlayed a pair of goals from a fourth-liner and a goal from an early-season surprise into a 3-2 overtime win over the Chicago Blackhawks at United Center.

Jay Beagle scored the first of his two goals in the seventh minute of the first period, one of the shorthanded variety.  It started at the Capitals blue line, where Matt Niskanen dove at a sliding puck to clear the defensive zone.  The puck was deflected off the stick of Chicago defenseman Duncan Keith and popped into the air.  As Niskanen and Keith gave chase, T.J. Oshie picked up the puck in the neutral zone.  Oshie curled around the two defensemen and headed into the Blackhawk zone on the left side.  As Beagle was cutting in on the right side, Oshie waited until he had a passing lane between Keith and his partner, Brent Seabrook.  Oshie threaded a pass through, and Beagle one-timed it past goalie Corey Crawford to open the scoring.

Brian Campbell tied the game for the Blackhawks on the same power play by taking a pass from Marian Hossa at the left point, taking a step up, and slamming a shot to the top far corner over goalie Braden Holtby’s glove just 22 seconds after the Beagle goal.

Beagle restored the one goal lead at the 14:44 mark on a play not normally associated with one in his role.  Taking a drop pass from Daniel Winnik just inside the Chicago blue line above the right wing circle, Beagle skated in, looking to pass to a teammate.  Finding none open, he continued down and around the circle, curling around the Blackhawk net.  From there he called his own number, wrapping the puck around the far post and beating a late-covering Crawford.

That would be it for the scoring until the dying moments of the third period.  With the Blackhawks having pulled their goaltender and gaining possession in the Caps’ end in the last minute, they worked the puck around the perimeter from right to left.  A shot by Artemi Panarin from the left wing wall made it all the way through to the far post to the left of Holtby.  It was there that Marian Hossa was waiting, and he made the most of the opportunity, stuffing the puck into the back of the net with 22.3 seconds left.

That left it to overtime for things to be settled.  The end came on a strange play.  It started with Marcus Johansson gathering up a loose puck in his own end and heading up the right side past the player benches.  As he fed the puck to Dmitry Orlov on the left side, T.J. Oshie lost his footing in the neutral zone and tumbled to the ice.  Vinnie Hinostroza, paying attention to the play unfolding in front of him, tumbled over Oshie, and the Caps ended up with a 2-on-1 break with Orlov and Johansson pushing Seabrook back into his own end.  Orlov fed Johansson going down the middle, and Johansson buried a shot past Crawford’s glove to give the Caps the 3-2 win.

-- Johansson’s goal was his third game-winner of the season, putting him in a tie for the league lead with four other players.

-- Taylor Chorney got his first game action of the season and had a pair of shots on goal and a hit in 13:31 of ice time.

-- The Caps got points from three defensemen in this contest.  Dmitry Orlov, Matt Niskanen, and John Carlson recorded assists.

-- Niskanen led the Caps in shots on goal along with Justin Williams (five); Beagle was next in line (four), accounting for almost half of the 28 shots on goal the Caps recorded.

-- The Caps were credited with 25 hits.  Only Daniel Winnik and Marcus Johansson were blanked in that column of the score sheet.

-- Orlov led the club with five blocked shots, almost a third of the 17 recorded overall by the Caps.

-- Johansson’s game-winning goal was scored on the only shot on goal recorded by either team in overtime.

Giving up a goal in the last half-minute is not in the script, but all’s well that ends well.  Ending the Blackhawks’ seven-game winning streak in one of the most intimidating arenas in the league is no small feat, and it should be taken as nothing less than a fine start to the road trip.  But the lasting image we have of this game is this one…. 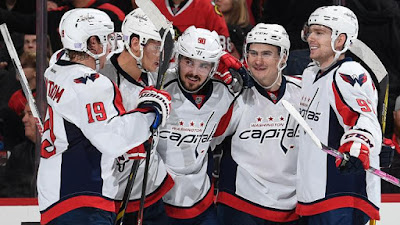 Take a good look.  If the Caps are to be successful when the flowers bloom, some of the players in this photo are going to have to step up their games as much as the stars.  Tonight was one of those times.

Photo: Bill Smith/NHLI via Getty Images
Posted by The Peerless at 7:09 AM No comments: