The Peerless Prognosticator is ON THE AIR!!! -- Eastern Conference Semifinals: Game 5/Capitals At Rangers, May 7th

The Washington Capitals head to New York to take on the Rangers in Game 5 of their Eastern Conference semi-final series with the teams tied 2-2 in games. And the series is about as even as the games won suggests. The Rangers hold a 9-8 edge in goals; the Caps a 115-111 edge in shots. Both teams have a pair of power play goals, the Caps getting theirs in a total of 12 chances, the Rangers getting theirs in 13 chances.

This has been an odd series through four games. Consider…

-- As everyone knows, the team that scored first in games has won each game thus far. But more than that, once a team gets that first goal, they have not surrendered the lead. Oh, the other team has come back to tie the game – Washington in Game 1, the Rangers in Game 2 after falling behind by two goals, the Caps in Game 3 before losing in triple overtime, and the Rangers twice in Game 4 after falling behind by a goal. But neither team has overtaken the other at any point in any game after surrendering that first goal.

-- It has been a grind-it-out series so far, but if you look at the late-game or game-winning goals, the stars have stepped up. Alex Ovechkin, Marian Gaborik, and Mike Green have game-winners, and Brad Richards scored an insurance goal in Game 1 for the only two-goal winning margin in the series.

-- In 14 full periods of hockey (including two full 20-minute overtimes) the Caps have recorded more than ten shots in a period only three times, the Rangers only once.

-- Jeff Schultz has been on the ice for three of the six goals scored by the Rangers in the three games Schultz has played. That wouldn’t be so bad but for two things. First, he has played the fewest total minutes of any Caps defenseman in those three games. Second, none of those three goals came in the triple-overtime game when Schultz played more than 31 minutes. That means that in the other two games he was on ice for three goals in less than 32 minutes of ice time.

-- Ryan Callahan has 25 hits through four games to lead the Rangers, Matt Hendricks has 21 for the Caps. The difference? Callahan has his in 33:06 minutes of ice time more than Hendricks.

-- The Rangers have three players who have played in each of their 11 playoff games to date and have less than seven minutes of average ice time in them (John Mitchell, Mike Rupp, and Stu Bickel). The Caps have none.


The Peerless’ Players to Ponder:

Once upon a time, Ruslan Fedotenko was a fairly decent “secondary” sort of scorer. He recorded more than 15 goals in seven of his first eight seasons in the league. But in his last three seasons, his goal scoring has dropped off, averaging 10 per season. He does not have a goal in these playoffs. In fact, he does not have one in his last 28 playoff games dating back to Game 1 of the Stanley Cup finals in 2009 when he was a member of the Stanley Cup-winning Pittsburgh Penguins. He is still getting good minutes (seventh among Ranger forwards in average ice time), but his role has changed quite a bit, being more of a third line checking forward. Still, he has only 13 shots on goal in 11 playoff games, six of those coming in the four games of this series. One thing to note…he has nine goals this season, all of them in wins. In no Ranger loss has he had a goal.

He was the only one of the Core Four not to record a goal in the 3-2 win on Saturday, but he might have been the most consistently effective forward in pushing play. He has 28 shot attempts in this series, 20 of them coming in the last two games (seven on goal). At the other end, he has been on ice for only one goal against, that coming in Game 1. He is without a goal in his last six games after getting one in three straight during the Boston series. He has been getting his chances. And that the Caps have been able to keep the series even with Semin quiet suggests that if those shots start going in, he could be a difference maker in Madison Square Garden.

2. Fight to get in tight. Here is the shot chart for Game 4 (from the Washington Post): 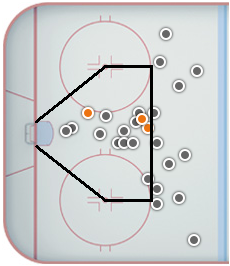 …that’s a nice cluster in the scoring chance area. There are subtle hints that the ice time distribution for the Rangers over the first four games, especially in the triple-overtime Game 3, is having some effect. The Caps got better looks at the Rangers’ net in Game 4, and if not for some fine saves by Henrik Lundqvist early, it might have been a rough game for the Rangers. Keep up this pressure and perhaps those effects will become more pronounced.

3. It’s not the number, it’s the percentage. Blocked shots, that is. As we noted in the post-game for Game 4, in the first three games of this series the Rangers blocked 30.4% of Caps shot attempts in Game 1, 30.6 in Game 2, 35.7 in Game 3. In Game 4 the Rangers blocked 17.5% of the Caps’ shot attempts. Part of that might be more intelligent use of angles and timing, making adjustments to find shooting lanes. And, it might be another effect of high ice times for important Ranger players.

In the end, the Caps have been here before – 16 days ago, in fact (it seems longer, doesn’t it?). The Caps have had their struggles over the years with Games 5, usually a product of their having built series leads and losing Game 5 on their way to a series loss. But in the first round they ground out a 4-3 win in Boston against the Bruins. And it was the way they did it that should make Caps fans happy. They took leads twice and withstood comebacks in each instance by the Bruins before using a late goal to get the win. It has been a frequent formula this spring, and since the Caps are 2-2 at Madison Square Garden this season, there is enough reason to believe that they can repeat their recent history as well.