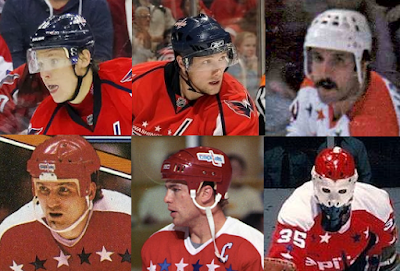 We are almost at the end of our “Peerless Playback” of the All-Alphabet team.  We now take a look back at “All-Team S” that was published in August 2014.  That team looked like this:

All-Team S has the distinction of being perhaps the most intriguing team of the alphabet teams.  It has elite-levels scoring (Alexander Semin), solid secondary scoring up front (Bob Sirois) and in the back (Scott Stevens), solid defense (David Steckel), and a physical edge (Neil Sheehy).  The intriguing part is that while there are a number of significant boxes checked on what makes a competitive team, All-Team S might be less than the sum of its parts.  Semin was an elite talent, but he was mercurial, capable of disappearing in some games.  Steckel, a fine defensive center, penalty killer, and faceoff specialist, lacked the playmaking skill one usually likes to see at the position.  Sirois had his only two 20-plus goal scoring years as a Capital, but he labored for weak teams.  Sheehy, who played only 131 games in Washington before being caught up in an off-ice incident, was a formidable defensive defenseman with limited offensive contributions, but he posted only one point in 21 career postseason games with the Caps.  Stevens might be the most well-rounded defenseman ever to play for the Caps, but his legend was built after he left the team as a free agent (and he, too, was caught up in the same incident as Sheehy).

Then there is the cast of potential replacements for this team among players who dressed for the team after the summer of 2014.  This is a rich pool, ten players whose last names start with the letter “S.”  Five of them are forwards (Zach Sanford, Mike Sgarbossa, Zach Sill, Devante Smith-Pelly, and Chandler Stephenson), while the other five are defensemen (Cameron Schilling, Nate Schmidt, Kevin Shattenkirk, Jonas Siegenthaler, and Ryan Stanton).  Three of this group of ten dressed for more than 100 regular season games and more than 20 postseason games as Capitals – Schmidt, Smith-Pelly, and Stephenson.

However, there is a “close, but no cigar” aspect to the potential replacements.  While Smith-Pelly has a fine postseason resume with the Caps, he was not a particularly productive player in the regular season.  He comes close, but we are not inclined to have him replace Sirois at right wing.  Stephenson was a player who might be described as “plucky,” and his offensive production on a per-game basis was similar to Steckel’s, but Steckel was the superior defensive player and merits retention at center on the All-Team S on a close call.

That leaves a potential Schmidt-for-Sheehy swap among the skaters.  Schmidt was not the stay-at-home sort that Sheehy was for the Caps, nor did he play with Sheehy’s physical edge (475 penalty minutes in 131 regular season games), but he more than made up for it by being a more productive player in the offensive end of the ice (8-35-43 in 200 games with the Caps versus 4-9-13 in 131 games for Sheehy).

In goal, Wayne Stephenson was a capable veteran (three seasons in St. Louis and five more in Philadelphia) before he arrived in Washington to wrap up his career with a pair of seasons as a Capital.  He had the misfortune of tending goal for teams that did not reach the 30-win mark in either of his seasons.  Despite the struggles, Stephenson had middle-of-the-road numbers, with a cumulative 3.66 goals against average and .876 save percentage over those two seasons (ranked 18th and 17th, respectively among 32 goalies appearing in at least 50 games).  It would be fair to say he outperformed his team.

As far as a replacement goes, the candidate is rookie goalie Ilya Samsonov.  Samsonov and Stephenson represent different ends of the development spectrum, the former at the beginning of his career and the latter ending his career in Washington.  That makes divorcing Samsonov’s potential from his performance an important consideration.  But Samsonov was impressive in his first season, ranking fifth among 23 rookie goalies in goals against average (2.55) and ninth in save percentage (.913).  He was tenth among all goalies in goals against average (among 52 goalies with at least ten games played) and 24th in save percentage.  Samsonov did his work behind a much better team than that for which Stephenson played, but we are still inclined to go with Samsonov as a replacement in goal for All-Team S.

What we are left with is a quite capable original All-Team S that looks more impressive than most on paper, but perhaps a difficult one in terms of the compatibility of parts.  The changes made here are more or less on the margin, giving the team a younger, and perhaps more energetic look.
Posted by The Peerless at 9:11 PM No comments: