The seats that the Caps occupied on their trip to Philadelphia on Sunday are probably still warm, but they get to enjoy that warm embrace once more as they travel back to Philadelphia for a pair of games against the Flyers on Thursday and Saturday at Wells Fargo Arena.  These will be the third and fourth meetings of the season between the clubs, each team winning once on the other’s rink.

The Caps enter the two-game set with a 9-2-1 record over their last dozen games and occupy the second spot in the East Division.  The Flyers eked out a 5-4 Gimmick win over the Buffalo Sabres on Tuesday night after falling behind, 3-1, bringing their record to 6-5-2 over their last 13 games, leaving them in fifth place and one point out of a playoff spot in the East.

The Flyers have not lack much for offense over those last 13 games, their 3.08 goals per game ranking 11th in the league over that span.  Sean Couturier leads the club in scoring over those 13 games, going 6-9-15, plus-5, despite missing a pair of those games as part of a ten-game absence due to a rib injury.  Only once in the 11 games in which he played over this stretch did he not record at least one point, a 4-3 loss to Pittsburgh on March 6th.  Over those same 11 games, a stretch that started with his posting two goals and an assist in a 7-4 win over the Caps on February 7th, Couturier recorded four multi-point games.

In his early career, he was looked at more as a defensive shut-down forward, not hitting the 40-point mark in any of his first six seasons with the Flyers.  But starting in 2017-2018, Couturier has not posted fewer than 22 goals or 59 points, going over 30 goals twice and recording consecutive 76-point seasons until he scored “only” 59 points in 69 games last season.  The discovery of his offensive game has not diminished his abilities in the defensive end of the ice; Couturier is the defending Selke Trophy winner as the league’s top defensive forward.  Couturier is 10-17-27, plus-13, in 35 career games against the Caps.

Shayne Gostisbehere is experiencing a resurgence of late.  In the Flyers’ 6-5-2 run, he has four of the six goals scored by the defense, and his five points is tied with Ivan Provorov for the team lead in points among defensemen over that span.  It would be a welcome development for Flyer fans if he could sustain this level of production, given how disappointing his recent performance has been.  Since posting 13 goals and 65 points with a plus-10 rating in 78 games 2017-2018, Gostisbehere was 14-35-49, minus-24, in 120 games over the last two seasons coming into 2020-2021.  There is an odd quality about his performance so far this season, though.  It seems 21 minutes of ice time is a marker.  In five games in which he logged more than that amount, the Flyers are 1-3-1, and he has only one point (a goal) in those five games.  In the 12 games in which he logged less than 21 minutes, the Flyers are 9-2-1, an he is 3-2-5, plus-3.  Gostisbehere is 1-7-8, plus-3, in 18 career games against Washington.

Rookies have not been featured among the Flyers this season.  Seven rookie skaters have appeared in a total of 24 man-games so far.  Forward Connor Bunnaman has 16 of those games on his record.  Bunnaman has been bouncing between the active and taxi squads this season, accounting for his intermittent presence in the lineup.  He is not a complete stranger to the Flyer lineup, though, his dressing for 21 games last season (he maintains his rookie eligibility by not having passed the threshold of games played prior to his “rookie” season).  His back-and-forth between the active and taxi squads is a reflection of his performance so far.  Bunnaman has one point (an assist) in his 16 games played to date this season, the only point recorded by a Flyer rookie.  If promoted back to the active roster (he was sent to the taxi squad on Monday) he would be looking for his first career point against the Caps in what would be his third game against Washington. 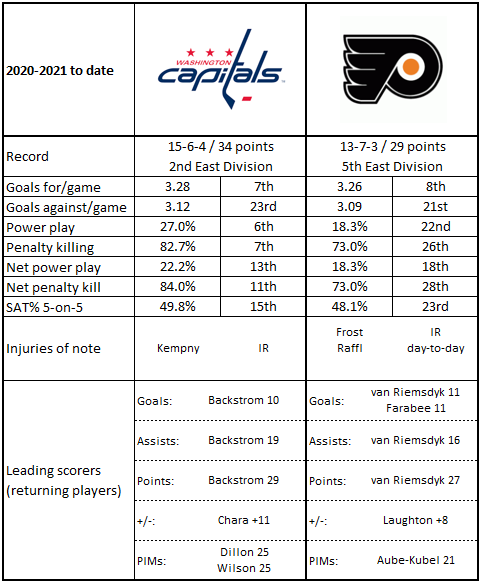 2.  The penalty kill has hardly been better, also ranking 28th over that period (70.3 percent), giving them the second-worst special teams index (power play plus penalty kill) over that span of time (84.0, ahead of only New Jersey at 74.1).

3.  One problem the Flyers have had in their 13-game run is carrying leads late into games.  Only three times in those 13 games have they led after two periods.  They won each of those contests.

4.  Scoring first seems not to have matter much in this stretch of games.  Nine times in 13 games the Flyers scored the first goal, but they have only a 4-4-1 record to show for it.  They have a better record when trailing first (2-1-1).

1.  The Caps’ 9-2-1 record over their last dozen games is tied for best in the league over that span.  The bad news is that the team with which they tied, the New York Islanders (also 9-2-1) has a two-point lead over the Caps in the East Division.

2.  The Caps have done it with defense and goaltending.  Their scoring defense over those 12 games (2.42 goals allowed per game) rank eighth over the period.

5.  What the Caps could use more of is first period scoring.  Over their last dozen games they have seven first period goals while posting 14 in each of the second and third periods.

One might have expected that after two very consistent seasons to open his NHL career, Nolan Patrick would take the next step in year three and become an even more prolific offensive force with the Flyers.  He was 13-17-30 in 73 games in his rookie season, 13-18-31 in 72 games last season.  This season has not gone according to plan.  In 23 games, Patrick is just 2-3-5, minus-6, and he is riding a 16-game streak without a point.  And it is not as if his presence in the lineup has had an otherwise beneficial effect.  In 15 games in which he logged at least 14:08 in ice time, the Flyers are 6-6-3, while they ae 7-1-0 when he logged less than that amount.  His shooting has all but dried up, too.  Only three times in 23 games has Patrick registered more than one shot on goal and in nine instances recorded none.  And his ice time is showing the strain.  Patrick averaged 15:30 over his first five games of the season, but in his last five that has been pared down by almost two minutes per game, to 13:44.  Patrick is 1-1-2, minus-1, in nine career games against the Capitals.

When Evgeny Kuznetsov posted a pair of assists in the Caps’ 5-4 overtime win over New Jersey on Tuesday night, it was his second multi-point game of the season, his first since posting a pair of assists in a 4-3 Gimmick loss to the Penguins in Pittsburgh on January 17th, and his first on home ice this season.  Not exactly what he, his coaches, or Caps fans have been expecting from Kuznetsov, even with the eight games he missed to COVID protocol earlier in the season.  The two-assist game against the Devils broke a four-game streak without a point.  What he needs to work on now is finding the back of the net on his own.  Kuznetsov does not have a goal since he recorded one on Valentines Day in a 6-3 loss in Pittsburgh to the Penguins, a streak of ten games without one and counting.

By the time the clocks are turned ahead for Daylight Savings Time this weekend, the Caps will have played the Flyers three times in four games over a span of six days, all of the meetings in Philadelphia.  Enough time to compare the virtues of cheesesteaks to roast pork sandwiches, or to develop a playoff-level of hate for an opponent.  That the teams are only five points apart in the standings (the Flyers with two games in hand) and Philadelphia trying to leap frog back into the playoff mix only adds to the intensity level with which these games are likely to be played.  That the Caps will not have to play the Saturday game as a matinee probably helps the cause, too.  However you cut it, it should be an entertaining pair of games.