“Observe due measure, for right timing is in all things the most important factor.”
-- Hesiod

If you are entering the walk year of a contract, with the likelihood that the next contract you sign could be the last big payday of your career, one could do worse than the year T.J. Oshie had for the Washington Capitals with respect to maximizing the potential for that payday.  Oshie topped the 30-goal mark for the first time in his nine-year career, set a career best in even strength goals (25, one short of his previous best for total goals scored in a season) recorded his best plus-minus (plus-28), and he led the league in shooting efficiency (minimum: 25 shots on goal) with a career best 23.1 percent.  Among players appearing in at least half of the season’s games, he finished seventh in goal scored per game, his 0.49 goals per game being an almost 50 percent improvement over his previous best (0.33 goals per game with the Caps last season).  He became the first Capital since the 2004-2005 lockout to average 0.49 or more goals per season whose first name was not “Alexander” – Ovechkin did it 10 times, Semin did it three times.

The season was a matter of Oshie starting well, with multiple goal splits in his first four ten-game segments (despite missing eight games), and building on that with at least five goals at ten points in three of his last four ten-game splits.  Mostly working the middle of the Caps’ 1-3-1 power play, he finished third on the team in power play goal (seven), but he was consistent enough to record at least one in five of his eight splits despite missing 14 games overall.

Oshie had the uncommon role of being a winger that took a lot of faceoffs.  Although he did not have quite the load he had in 2015-2016, when he won 52.7 percent of the 262 draws he took, he still took 190 faceoffs this season (winning 48.3 percent), fifth-most on the club and most by a non-center on the team, despite appearing in only 68 games. 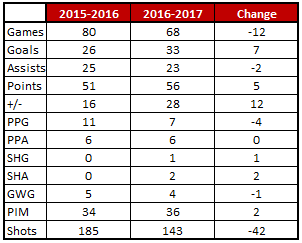 Fearless’ Take… If there is a "T.J. Oshie hat trick," it might be a goal, a blocked shot, and a hit.  In games in which he recorded at least one of each, the Caps were 11-0-1, the only loss being that bizarre 8-7 overtime loss to Pittsburgh on January 16th.

Cheerless’ Take… It is hard to find much fault with Oshie’s performance this season.  If one wanted to be picky, he didn’t shine in terms of possession, at least compared to his teammates.  His individual 51.71 percent Corsi-for at 5-on-5 was eighth among 16 Caps forwards skating at least 50 5-on-5 minutes this season (numbers from Corsica.hockey).

Odd Oshie Fact… Only one player in the league scored more goals than T.J. Oshie and had more credited hits.  Oshie had 33 goals and 95 hits; Anders Lee had 34 goals and 172 hits for the New York Islanders.  Alex Ovechkin had more hits (216), but had 33 goals, the same total as Oshie.  He is the only player in the league to score more than 30 goals, record more than 90 credited hits, post 50 or more blocked shots, and take 175 or more faceoffs.  He is one of only nine players since the 2004-2005 lockout to hit or pass those thresholds in each of those categories in a single season (source: NHL.com).

After the Caps lost on Opening Night to the Penguins in Pittsburgh, they had to wait another 15 games before getting another shot at them.  And when they did, T.J. Oshie almost single-handedly ran them out of Verizon Center in the first period.  It was Oshie’s defense on the penalty kill that got things started for the Caps.  The game’s first scoring sequence started with Brett Connolly in the penalty box for the Caps and the Penguins getting a bit too cute in the offensive end.  Evgeni Malkin tried to ease the puck past Oshie to Kris Letang just inside the Caps’ blue line.  Oshie got his stick on the chip pass, and before Letang could get his stick on the puck, Oshie chipped at it again, nudging the puck out of the defensive zone.  Jay Beagle ran the puck down and broke in on goalie Matt Murray, who denied Beagle’s attempted backhand.  Oshie followed up, though, and with Murray still down on the ice flipped the puck over him at the 7:31 mark to make it 1-0.

Ten minutes later, Oshie assisted on a goal by Nicklas Backstrom that made it 2-0, and then with just 7.9 seconds left in the period he followed up a John Carlson shot, jumping on a rebound at the post to the left of Marc-Andre Fleury (Murray left with an injury earlier in the period) to make it 3-0.  After Dmitry Orlov gave the Caps a 4-0 lead in the second period, Oshie was on the score sheet a fourth time, centering a pass to Justin Williams for a power play goal 5:37 in the period to give the Caps a 5-0 lead on their way to a 7-1 win.

Fresh off the four-point night against the Penguins, Oshie and the Caps hosted the Detroit Red Wings.  There would be no four-point night for Oshie, though.  There would not be as many as four shifts.  On his third shift, he caught Riley Sheahan with a hit at center ice, but while Sheahan was sent to the ice, it would be Oshie who would be sent to the locker room, one of three Caps forwards to leave the contests early with injuries, all of them in the first period (Lars Eller and Andre Burakovsky were the others).   The upper body injury would keep Oshie out of the lineup for seven games.

It was a case of two distinct playoff series for T.J. Oshie in the spring.  In the first round series against the Toronto Maple Leafs, Oshie was 3-4-7, plus-1, recording his three goals on 14 shots in six games.  In the second round, it was a case of the Penguins finding a way to shut him off from shooting positions, or Oshie not being able to find the openings.  He did not record a shot in either of the first two games of the series against Pittsburgh, and while he did manage to post 13 shots in the last five games, he found the back of the net only once.  It was an unfortunate end to his and the Caps’ season, especially given his performance against the Penguins in the last four games of the series.  Over those four games, Oshie did record three points, tied for the team lead with a plus-5 (with Andre Burakovsky), had one of the two power play goals the team had, and led the club in credited hits (23, compared to the 24 he had in the first nine games of the postseason).

T.J. Oshie plays a heavy game, certainly a heavier game than one might expect for a player of his size.  It has, from time to time, taken a toll.  He missed 14 games this season and has missed 47 games over the last five seasons.  It seems to be the price to be paid for the services of a player who plays hard in all three zones, who contributes at the offensive end and works his way into those spaces in which it is very difficult to make a living.  His presence made a difference in the regular season, the Caps being a more successful team with him in the lineup than they were without him.  It would be hard to find a lot of fault in his postseason performance overall, given that he finished second on the club in points (a career best 12 points in the postseason), was third in credited hits, first among forwards in blocked shots, and led the scoring line forwards in possession numbers in the postseason (58.24 percent Corsi-for at 5-on-5).  The effort was there, and for the most part so was the performance.  In Game 7 of the second round, that exquisite sense of timing Oshie had in the 2016-2017 season was, as it was for the team overall, missing.