“We convince by our presence.”
-- Walt Whitman

It might surprise you, even if you are a fan of the Washington Capitals, that Aaron Volpatti was one of 12 forwards with the club at the end of the season who appeared in at least half of the team’s games. Only two of those games, however, came after the break for the Olympic Games.  By that time, a gimpy Brooks Laich was viewed as a better option at left wing, then Dustin Penner was obtained in trade, and Evgeny Kuznetsov was finally introduced to North American hockey, leaving no room at the left wing table for Volpatti.

Volpatti presents something of an odd statistical profile, which might not be all that unusual given his limited exposure on the ice.  First, there is that ice time.  Only four times in 41 games did Volpatti skate more than ten minutes.  His 7:21 in average ice time was 531st among 583 forwards who dressed for NHL games this season.  Only 11 forwards playing in at least half their team’s games averaged less ice time.

In those 41 games Volpatti was even or better in 36 of them.  Only once was he worse than minus-2, that in a 4-0 loss to the Pittsburgh Penguins back on November 20th.

That is not to say he had correspondingly decent possession numbers.  He most assuredly did not.  Volpatti was 368th of 375 forwards playing in at least half of his team’s games in Corsi-for percentage at5-on-5.  He was 371st in Fenwick-for percentage at 5-on-5 among that group of forwards.  Working up the statistical chain, he was 371st in shots-for percentage and 345th in goals-for percentage.  You could say that good things happening when Volpatti was on the ice were somewhat rare occurrences.  It might have looked even worse had Volpatti not had the highest save percentage on-ice at 5-on-5 of any skater playing at least half the Caps’ games this season (.954).

Volpatti’s statistical performance was not necessarily a product of poor defense, that high on-ice save percentage notwithstanding.  However, as an offensive threat he (and his fourth line teammates) was almost non-existent.  Of those 375 forwards playing in at least half their team’s games, Volpatti ranked 371st in shooting percentage relative to his team’s when he was not on the ice.

It was not even as if Volpatti was an especially inefficient shooter.  At 11.1 percent for the season his shooting percentage was equal to that of Niklolai Kulemin and a tenth of a percent better than Daniel Briere.  Ah, but “low population size.”  Volpatti recorded only 18 shots in 41 games covering almost 302 minutes of ice time.  Those 18 shots in 41 games was a far lower frequency (0.44/game) than that of his most frequent linemates on the fourth line, Jay Beagle (0.97) and Tom Wilson (0.77). 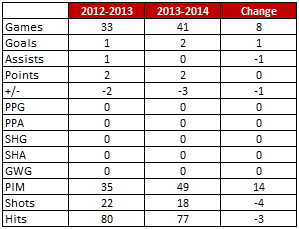 Fearless’ Take… The Capitals were 22-12-7 with Volpatti in the lineup, 16-18-7 in his absence.  Maybe there is something to be said for being there.

Cheerless’ Take… If you are not a big offensive threat, you’d better be putting a charge into your team.  Volpatti was a big hitter, as Caps forwards go (one of two Capitals forwards playing at least half the team’s games to average more than 1.5 hits per game), but he did not have so much as a single second of penalty killing time, and the Caps were 1-2-2 in games in which Volpatti recorded a fighting major.

Odd Volpatti Fact… Since Aaron Volpatti came into the league in the 2010-2011 season, only three forwards playing in at least 100 games and playing in all four seasons have recorded fewer shots on goal (Tom Sestito, Cam Janssen, and Colton Orr)

Game to Remember… November 30th versus New York Islanders.  Scoring first means something in the NHL.  Teams scoring first had a record of 853-222-152 this past season.  So, even when that first goal comes from a fourth-liner, it means something.  That was the case on the last day of November when the Caps visited the Islanders in Uniondale, NY.  After a scoreless first period, the Caps were pressuring the Islanders in their own end in the ninth minute of the second period.

Martin Erat outdueled Aaron Ness behind the islander net for possession of the puck.  Circling to the left of goaltender Anders Nilsson, Erat sent the puck across the crease to Tom Wilson at the right post.  Wilson took a whack at it, but Nilsson kicked it back out.  Unfortunately for Nilsson, Aaron Volpatti had his stick on the ice right in the path of the rebound.  As he was being jostled by defenseman Matt Carkner, Volpatti flipped the puck past Nilsson, and the Caps had a 1-0 lead in a game they would go on to win, 3-2.  Oddly enough, Volpatti would be second only to Alex Ovechkin in shots on goal with four.  That was more than 20 percent of the shots on goal he would record for the season (18).  He would record only five shots on goal over his remaining 21 games.

Game to Forget… December 17th versus Philadelphia.  Games against the Flyers have been wars since the teams were Patrick Division combatants in the 1980’s.  The Caps had already won two games against the Orange and Black, one in a game that feature 164 minutes in penalties and another in a closely fought (figuratively speaking) Gimmick outcome.  Two days after that Gimmick decision, the Caps visited Philadelphia to try and seal back-to-back wins.  At first it looked good.  The Caps held the Flyers to a scoreless draw in the first period, then Alex Ovechkin put the Caps in front with a power play goal just 40 seconds into the second period.  The Flyers tied it less than a minute later, but Eric Fehr put the Caps ahead again 5:31 into the period.

Then came what was arguably the turning point of the contest.  On the ensuing faceoff, Aaron Volpatti and Adam Hall dropped the gloves.  Hall caught Volpatti off balance and dropped him with a right hand to the side of the head.  Volpatti rallied to work the bout to what looked like a draw, but the fight seemed to energize the Flyers.  The home team scored three goals in the last 8:06 of the period and won going away, 5-2.  Volpatti finished the game with one shift after his fight that lasted one second, seven shifts in all covering 3:54 in ice time, and no shots on goal.  While he might have had the best of intentions, making Hall answer for a big hit on Alex Ovechkin earlier in the game, the timing was found wanting, and the results were not nearly what the Caps might have had in mind.

Even as fourth-liners go, Aaron Volpatti did not have a very memorable year.  There were just too few contributions on offense, none on the penalty kill (where a fourth liner might make some contributions these days), and with very limited overall ice time to boot.  He was given fewer than ten minutes of ice time in each of his last 19 games of the season and had a season high of 11:10 back in December.  Even when he was present, he was not particularly convincing in his performance, even when accounting for his role.

Posted by The Peerless at 3:32 AM No comments: