"For of all sad words of tongue or pen, the saddest are these: 'It might have been!'"
-- John Greenleaf Whittier

Michal Kempny was the “X Factor” when he was obtained via trade by the Washington Capitals from the Chicago Blackhawks in February 2018 for a third round draft pick.  He was the piece that allowed all the others to fall into their place, the piece that provided an unexpectedly high level of stability and balance on the blue line, an important ingredient in the Capitals’ march to a Stanley Cup championship.  Kempny was rewarded with four-year/$10 million contract, and fans were left to think about how things might unfold with Kempny in the fold for an entire season in 2018-2019 as the Caps looked to repeat as NHL champions

Kempny got off to a bit of a slow start in the new season.  It was delayed when he suffered an upper-body injury in a pre-season game against the St. Louis Blues, an elbow to the face from Robert Bortuzzo, that put him on injured reserve and kept him on the shelf for the Caps first two games of the regular season.  He appeared in 16 of the next 17 games for the Caps and posted two assists with a plus-4 rating.

It was at this point that Kempny found his scoring touch.  Over an 11-game stretch from November 19th through December 11th, he went 2-6-8, plus-15, while averaging more than 20 minutes of ice time per game.  That was a quick pace for a “puck-moving” defenseman to sustain, and he did cool off some, but he did continue making offensive contributions at a career-best pace and did so by being in the lineup night-in and night-out.

When the Caps beat the New Jersey Devils, 4-1, on March 19th in what was Kempny’s 70th game of the season, he was in the midst of another solid run, going 1-6-7, plus-4, over a 12-game stretch.  In Game 71, though, a matchup at Capital One Arena against the Tampa Bay Lightning on March 20th, it all came crashing down.  Late in the second period, tempers boiled over, and players squared off.  Most attention was focused on Jakub Vrana and Yanni Gourde wrestling with each other, but Kempny and Cedric Paquette got tangled up in front of the players’ bench.  Paquette took Kempny to the ice, and Kempny’s left leg bent awkwardly underneath him.  Diagnosis: torn left hamstring.  He underwent surgery, ending his season far too soon. 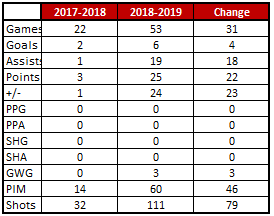 Fearless’ Take… It turns out that Kempny, who was on a short list of most consequential trading deadline acquisitions in 2018, was on a short list of biggest bargains in 2019.  He obliterated career highs in goals, posting six (he had three in three last season with two teams), assists (19, surpassing last seasons’ seven), points (25 versus 17 last year), plus-24 (he was plus-17 last season), shots on goal (111 versus 82 last season), and average ice time (19:11 versus 15:55 last year).  And even though he had his season cut short by injury, he dressed for a career high 71 games.  If you discount the last of them, in which he was injured and that the Caps lost in overtime to Tampa Bay, the Caps were 42-22-6 when Kempny got a sweater.  They were 16-6-4 in games in which he skated at least 20 minutes.

Cheerless’ Take… About the worst thing one can say about Kempny’s season is that he got hurt.  His numbers don’t jump off the page, but he was consistent, without high highs or low lows.  He was 4-9-13, plus-9, in 35 home games; 2-10-12, plus-15, in 36 road games.  Only against Pacific Division teams did he average less than a third of a point per game, and he had points against 18 of the 30 teams in the league.  Only against the Nashville Predators was he worse than a minus-1 for the season (minus-3 in two games), and he was a “minus” player against only four of 30 teams he faced.  He and John Carlson were the only defensemen appearing in more than two games who finished over 50 percent in shot attempts-for percentage at 5-on-5.  But what was strange was that it was Kempny who led the defense in penalty minutes, and by a large margin (60 in 71 games to Matt Niskanen’s 41 in 80 games).

Odd Kempny Fact… Michal Kempny is not known as an offensive defenseman, but he is one of only three Capital defensemen since 2005-2006 to record at least 25 points in 75 or fewer games while posting a plus minus of plus-20 or better (he was 6-19-25, plus-24, in 71 games).  Mike Green and Matt Niskanen were the others (Green did it twice).

The Caps opened the season spinning their wheels, going 8-7-3 in their first 18 games.  They looked to be coming out of that early season fog with a pair of overtime wins in Colorado and Montreal to close a four-game road trip.  That set up a meeting with the Chicago Blackhawks in their return to home ice on the night before Thanksgiving and, for Michal Kempny, a chance to face his for the first time since his trade to the Caps in 2018.

The Caps broke on top in the first minute, Tom Wilson scoring 54 seconds into the contest in his first home game after his suspension to open the season.  Andre Burakovsky scored less than six minutes later to put the visitors in a hole.  Kempny dug that hole a little deeper for his old team mid-way through the second period.  From a scrum battling to win a faceoff in the Chicago end, Jakub Vrana emerged with the puck and cricled out and around the far side of the faceoff circle to the right of goalie Corey Crawford.  Patiently waiting for a passing lane from the wall, he slid a pass between two Blackhawk defenders to Kempny five feet inside the blue line.  Kempny’s one-timer sailed through a clot of bodies in front and past Crawford to make it 3-0, 9:28 into the period.

The Blackhawks would get two of the goals back, but the Caps iced it on a third period goal by Devante Smith-Pelly.  For Kempny, it was a fine night.  In 18 minutes and change, he had the game-winning goal (his first goal of the season), three shots on goal, a hit, a takeaway, three blocked shots, and finished plus-2.
Game to Forget…  January 22nd vs. San Jose

After wrapping up the 2018 portion of the season with a 24-11-3 record, the Caps started the 2019 portion of the schedule unable to get out of their own way.  They did earn points in their first four games of the new year (3-0-1), but then forgot how to score, posting a total of four goals in four games while going 0-3-1.  They broke out of the scoring slump with five goals in Chicago, but gave up eight to the Blackhawks for their fifth straight loss.  That brought them home to host the San Jose Sharks.

Things started poorly for the Caps when the Sharks scored just 12 seconds into the game.  The Caps shook it off to score three times before the first intermission, allowing only one other San Jose goal to take a 3-2 lead to the locker room.  San Jose tied with another first minute goal in the second period, but the Caps scored twice less than three minutes apart later in the period to take a 5-3 lead.  San Jose closed to 5-4 before the second intermission, but the Caps appeared to get some breathing room with a goal by Alex Ovechkin early in the third.  It was a false sense of security.  San Jose got a power play goal mid-way through the period to get back within a goal, and then Evander Kane scored with 1.0 seconds left in regulation to send it to overtime.  In the extra session, Tomas Hertl completed a hat trick 1:48 in to give the Sharks the improbable win and send the Caps to their sixth straight loss.

For Kempny, it was a lost night.  In 22:30 of ice time he had four shot attempts, but all of them were blocked, and he did not have a point.  Worse, he was on the ice for three goals against, including the game-tying goal by Kane in the last second when he left Kane alone on the weak side of the play to check Hertl in front of the net.

Looking ahead… When Michal Kempny underwent surgery to repair his torn hamstring in early April, it was reported that he could miss 4-6 months.  That prognosis was updated in late April to his being ready for training camp,  which is much better news for the team.  Whenever it is that Kempny is cleared for competition, the real target might be the second half of the 2019-2020 season when a (hopefully) fully healthy Kempny will once more be an important cog in a defense that will, at a minimum, include John Carlson, Dmitry Orlov, and Nick Jensen, with perhaps Christian Djoos and Jonas Siegenthaler having grown out of their “prospect” status.  If Brooks Orpik and Matt Niskanen move on, it makes Kempny’s full recovery that much more important.

Michal Kempny credits the trade to the Capitals in February 2018 as saving his career in the NHL.  In a perverse sense, his importance to the team was made clear as crystal when he was absent for the opening round playoff series against Carolina, especially when you consider that the Caps’ defensive corps combined for three points (all assists) in 18 man-games of action on the road.  Last spring, Kempny was 1-2-3 in 13 road games.  No single player could be said to be the element in a series win or a loss, but when a team is eliminated in double overtime of a Game 7, one has to think that a contribution somewhere down the line that might have been made by an important player who was absent could have been the difference in advancing to the next round (and think what the Caps did last year after falling behind 0-2 to the Columbus Blue Jackets in the opening round) and going home for the summer.  In that sense, it really is sad to think that if Kempny was in the lineup in the postseason, “it might have been.”