It's An Ovie-ful Life: Part I

Over at Kukla’s Korner the other day, Tony at The Confluence penned a piece pondering the notion of whether the Penguins would still be in Pittsburgh had a certain ping pong ball not dropped a certain way in the 2005 NHL draft lottery.

Well, it got us to thinking, what if the ping pong ball had gone another way in 2004? What if, instead of coming up “Capitals,” it came up “Blackhawks,” or worse…”Penguins?” With respect to the latter we, too, will have recurring nightmares of a number “8” jersey in black and Vegas gold. But for our purposes here, we’ll take a stroll through Bedford Falls and contemplate life with the Capitals had Alex Ovechkin not been drafted.

The Capitals would have drafted third in that 2004 draft, by virtue of their having finished with the third worst record in the league, regardless of whether the Blackhawks or Penguins won the lottery. Assuming that both Ovechkin and Evgeni Malkin would have gone 1-2 in that draft, just as they did in the real-life version of the story, the Capitals would have been left with a second-tier selection of talented, but not generational franchise players.

Given the fact that in five of the previous six drafts the Capitals selected their first pick from the Western Hockey League in Canadian juniors, you would have to think it likely, if not a certainty, that the Caps would go out west once more. The consensus third-ranked prospect in that draft was Cam Barker, a defenseman with the Medicine Hat Tigers. However, the Caps had indifferent success in picking defensemen in years leading up to the 2004 draft. In the previous five drafts, the Caps selected 13 defensemen, only one of whom – Steve Eminger – gave much hope, at least to Caps fans, of one day being a contributing NHL player (Johnny Oduya, selected in the seventh round in 2001 went on to skate a regular turn for the New Jersey Devils). Two of those 13 defensemen – Nolan Yonkman and Ross Lupsachuk – had already been traded away in the Jaromir Jagr deal in 2001. Picking Barker would have made sense and would have been consistent with the Caps’ behavior to date.

So… Cam Barker is the number three pick selected. Where does the club go from there? Well, there was still the 2004-2005 lockout, but there a 2005 draft, too. To remind folks, the rules set forth for the lottery to assign the draft order were simple (if their logic wasn’t). First, each team started with three ping pong balls and lost one for each playoff appearance in the previous three years but only to a maximum of two, assuring each team will have at least one ball. Under this rule, the Caps would have lost one ball, having participated in the 2003 playoffs. Second, teams that had the first overall pick in each of the last four drafts also lost a ball. Since the Caps didn’t have a first overall pick (remember, they didn’t win the 2004 lottery in this tale), they would have had two balls (neat how that works out).

There were 10 clubs that had two balls in the 2005 draft lottery. Pittsburgh could have lost one to be left with two had they won the 2004 lottery. Had Chicago won the lottery, they would have lost one to be left with one ball. But let’s not complicate things any further. Of the ten teams with two balls, Anaheim managed to end up selecting second, Carolina third, and Minnesota fourth, so despite the rather long odds of a two-ball club getting the first overall pick (4.17 percent chance), there were still the opportunities to select early (even though the grand prize – Sidney Crosby – would be gone).

For the sake of argument, let’s assume the Caps had the best possible luck – yes, we know…that never happens for the Caps, but humor me. They would get the second pick. When the Ducks picked second, they selected Bobby Ryan (of the Owen Sound Attack in the Ontario Hockey League), but he was not the consensus number two prospect. Both Central Scouting and ISS, for example, had Benoit Pouliot (Sudbury, OHL) as their number two-ranked prospect.

From the Caps perspective, would they go for an OHL forward (the Caps hadn’t drafted an OHL forward since picking Charlie Stephens in the second round in 1999)? Would they go for defenseman Jack Johnson (NTDP Under-18)? Would they go west again and draft Gilbert Brule (Vancouver, WHL)? The Caps had that whole WHL history and hadn’t yet shown an inclination to draft out of US programs by that time, at least with high picks. But was Johnson too good to pass up? Would they fall back on what they knew and pick Brule? Would they go off the board? While the Caps did, in fact go off the board in 2005 – off the reservation, in fact – selecting Sasha Pokulok at 14, we have a suspicion they would have played safe – “safe” meaning repeating their past behavior – and picked Brule.

Keep in mind, though, this was the best possible outcome based on the Caps picking second, instead of the club that did, the Anaheim Ducks. Of the ten teams that had two ping pong balls in the 2005 draft, the team with the lowest pick was Calgary, picking 26th. If you’re wondering who they picked, it was Matt Pelech.

So, as we come out of the lockout year into the light of the 2005-2006 season, the Capitals would not have Alex Ovechkin and Sasha Pokulok to show for their top draft picks in 2004 and 2005, but rather Cam Barker and Gilbert Brule. It is there where we will pick up the story in the next installment.
Posted by The Peerless at 7:48 PM 4 comments:

Email ThisBlogThis!Share to TwitterShare to FacebookShare to Pinterest
Labels: Alex Ovechkin, it's an ovie-ful life

"It's a great result for Milan" 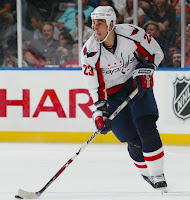 So said Allan Walsh, agent for Caps defenseman Milan Jurcina, about the arbitration award given to Jurcina.

According to the Washington Times, a league source confirmed that the award is just under $1.4 million. As it is below the $1.57 million threshold that would permit the club from walking away from the deal, the result is binding.

So now, we have the defense more or less in place:

There is not room for both Karl Alzner and John Carlson in this mix. There might not be room for either, if the Caps carry seven defensemen...

That would seem to be almost a betting certainty at this point.

Edit... The Jurcina award appears to put the Caps less than $150,000 under the 2009-2010 salary cap for 22 roster players most likely to appear on the opening night roster (absent any trades) and buyout money. One would have to think there will be more tinkering done.
Posted by The Peerless at 6:04 AM 1 comment: