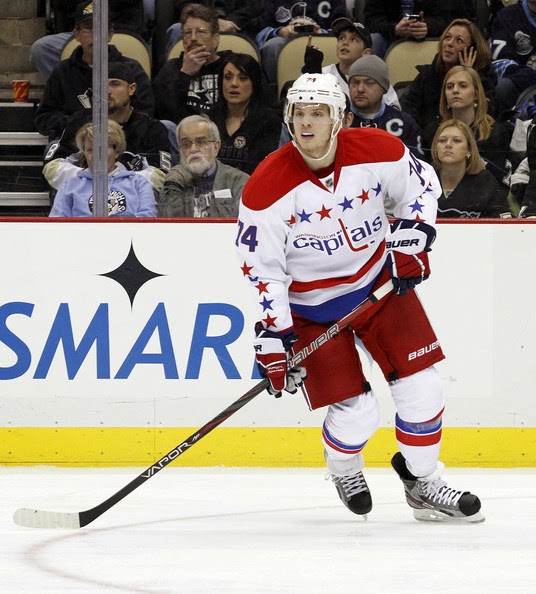 "The key to growth is the introduction of higher dimensions of consciousness into our awareness."
-- Lao Tzu

At the ripe age of 24, Carlson is now the Washington Capitals’ answer to the two-way, all-situations defenseman.  And with it came a certain maturity and stability in his game.  As to the latter, consider that at 5-on-5 he played more than ten times as many minutes (952:35, 72 percent of his total 5-on-5 ice time) with Karl Alzner as he did with his second most frequent partner, Dmitry Orlov (93:09).


Looking at his ten-game segments, Carlson was fairly consistent in his production with a late push in points, most of that coming in power play distribution (14 assists in his last three segments), a product of his taking over the lion’s share of the responsibilities manning the point on the man advantage. 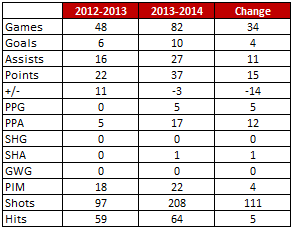 Fearless’ Take… Carlson has come a long way in a short time.  If you look at the defenseman cohort of the 2008 entry draft, Carlson’ career numbers are:

It is worth noting that in every instance in each of those measures above that the defensemen ranking higher than Carlson were drafted before he was (27th overall) with the exception of San Jose’s Jason Demers (selected 186th overall), who outranked Carlson in career plus/minus (plus-26 to plus-25).

This season Carlson finished with the team lead in goals (10) and was second in assists (27 to Mike Green’s 29) and points (37 to Green’s 38).  His power play goals (5), assists (17), and points (22) led all Caps defensemen, as did his time on ice (24:30/game).  He is one of only four defensemen in teh league (Keith Yandle, Matt Carle, and teammate Karl Alzner being the others) to have played in all 294 games over the past four seasons.  He is second only to Yandle among those four in total minutes played.

Game to Remember… November 15th at Detroit.  The Capitals were on a strange roll.  Going into their 20th game of the season in Detroit, Washington had participated in three extra-time games in their previous four contests, four of their last six over a span of ten days.  When they took the ice against the Red Wings on November 15th they were thinner than usual on defense.  Mike Green was out, which was going to place a larger burden on John Carlson to pick up the available ice time, especially on the power play.  It would not be the power play on which Carlson would make his mark in this game; it would come in the third period.

Through 40 minutes Carlson already logged 17:25 in ice time, about on his season pace.  But in the third period, after he was on ice for a goal by Alex Ovechkin that got the Caps to within a goal at 3-2, it was his shot to the Detroit net that pinballed at the top of the crease and onto the stick of Michael Latta, who backhanded the puck in for his first NHL goal to tie the game.

What might have been more amazing was what Carlson did in overtime.  Neither team would score in the extra session, but Carlson skated 4:19 of the five minutes, all of it coming on two shifts, including the last 3:49 of the overtime.  Carlson finished with 32:26 in total ice time (his second highest of the season), 6:43 of it on the power play to lead the team.  He also had 5:51 in shorthanded ice time, tied with partner Karl Alzner for the team lead.  Carlson finished with an assist and a plus-2 in what would be a 4-3 Gimmick win for the Caps at Joe Louis Arena.

Game to Forget… December 17th at Philadelphia.  It started well enough for the Caps at Wells Fargo Center when Alex Ovechkin scored a power play goal just 40 seconds into the second period of their contest with the Flyers.  Less than a minute later, though, the Flyers drew even, and John Carlson got a pretty good look at it.  As he was marking the Flyers Michael Raffl at the Flyers’ blue line, Brayden Coburn was skating the puck from around the back of the Flyers’ net.   As he was sending the puck up to Jakub Voracek, Claude Giroux cut through the middle and behind Carlson to create a 2-on-1 with only Karl Alzner back.  Voracek called his own number and wristed the puck past goalie Braden Holtby to tie the game.

Eric Fehr restored the Caps’ one-goal advantage four minutes later, but Philadelphia tied the game in the 12th minute of the period, Carlson once more getting a good look, this time on the power play.  A shot by Nicklas Grossman was knocked down by Steve Downie in front of Holtby.  Alzner stepped up on Downieto block his shot attempt.  Nicklas Backstrom had Brayden Schenn covered at the top of the crease, but the puck squirted over to Matt Read with Carlson a step tooo far away to engage him. Read batted the puck in to tie the game.

Things just got worse after that for the Caps and for Carlson.  It started with a major penalty to Tom Wilson for running Brayden Schenn into the boards.  The Flyers took the lead on the ensuing power play when Mark Streit scored.  The Flyers got an insurance goal on the power play barely a minute after that when Voracek got his second goal of the game.  Carlson did what he could, tying up Scott Hartnell’s stick, but it was another minus on his ledger, making him a minus-3 (his worst of the season) in a 5-2 loss to the Flyers.

Although Mike Green’s numbers, on a per-game basis, remained superior to Carlson’s over the entirety of the 2013-2014 season, one got the feeling that by the time April rolled around Carlson was the go-to guy in every situation – even strength, penalty killing, and even on the power play, where Green ruled for several seasons.  Still, it remains somewhat unclear whether Carlson (and his frequent partner Karl Alzner, for that matter) is a top-pair defenseman just yet on a bona fide Stanley Cup contender.  He certainly was – and is – on this Capitals team, but that might be a statement about the depth and talent of the defense overall.

This is not to diminish Carlson’s performance this season or his influence on the team’s fortunes.  He is, after all, still just 24 years old and is on the upgrade of his career arc.  This season, for example, it just seemed by observation that he had far fewer brain cramps and mental lapses that seemed to infect his game in, say, the 2011-2012 season.  That speaks to the maturity aspect of which we spoke above.

As much as we have called into question the record of this franchise in bringing amateur talent to the big club (and keeping them there), we think an argument can be made that John Carlson is among the best draft picks this administration has made when you consider a number of factors.  He was not a lottery pick (not “top-five,” like Alex Ovechkin, Nicklas Backstrom, or Karl Alzner), he was the product of a draft pick obtained in trade (June 20, 2008, the Caps obtained the 27th pick in the draft from Philadelphia that was used to select Carlson for Steve Eminger and the 84th pick in the 2008 draft), his selection filled precisely the hole left by the underachieving Eminger (a 12th overall pick in 2002), and he has had performance numbers that are at least competitive with his draft cohort and in many instances superior.  This was a pick that the Caps had to work for to get, to identify, and to manage well in terms of his developmental progress, and it was a pick that repaired a problem that occurred with a previous pick.

There is room for improvement with Carlson, as would be the case for just about any player who toiled in every game for an underachieving team in 2013-2014.  But what we said last year at this time for Carlson echoes:


“For Carlson’s own game, it is now a matter of growth, to become the reliable, consistent two-way defenseman fans saw in the making when he came into the league.”

Posted by The Peerless at 6:03 AM No comments: