It was another disappointing night for the Rangers and their head coach, John Tortorella.  It was disappointing for those of us compiling the “Torts’ Shorts,” too.  We keep waiting for the headmaster to descend into a sputtering, fire-breathing swirl of hate.  But thus far he has been measured, reasonable, affable…in other words, “BOH-rinnnnnnnnng”…

“…the second period, neither team developed a whole bunch.  They scored on a power play, but for our team, yeah, it did go downhill.  Had a couple of chances in overtime; third period we didn’t have much…that’s the way it worked out.”

-- answering whether he was disappointed that the Rangers didn’t have as many scoring chances later as they had early in the game.

“I don’t consider it an elimination game; we’re trying to win one game.  I’m not even going to use that word.  Again, we have bounced back.  Guys that haven’t been in it, it’s an opportunity.  That’s the way they have to look at it.  So we’ll go home and try to win a game.”

-- on the Rangers facing elimination in Game 6

Coach was calm, patient, forthcoming.  Not entertaining to beat writers, perhaps (at least the ones to whom his ire is not directed), or those of us engaged in rib-poking, but he’s been almost…nice.  We have to think other things were on his mind, though… 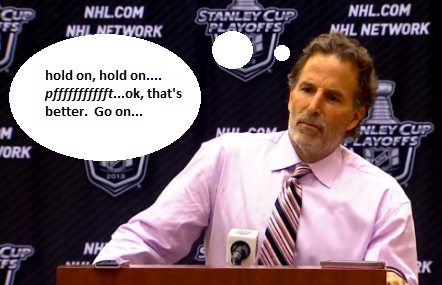 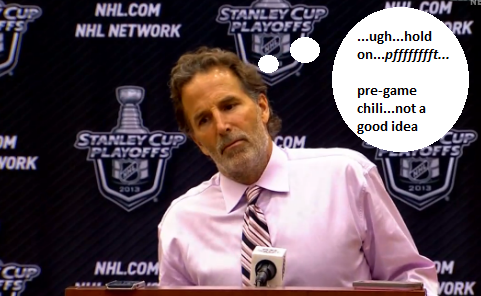 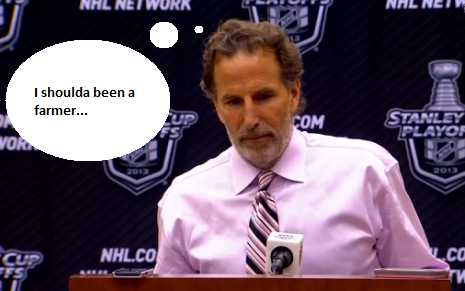 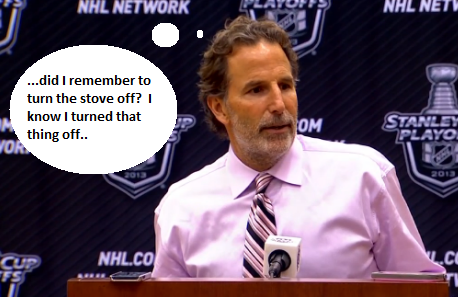 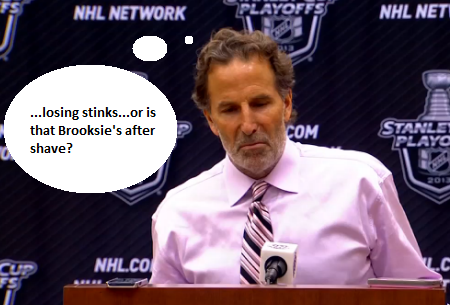 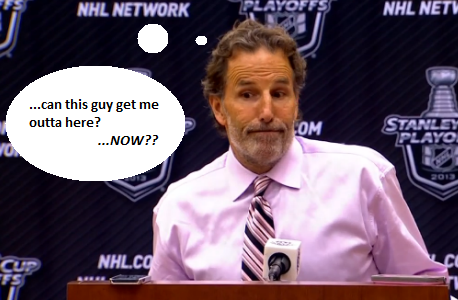 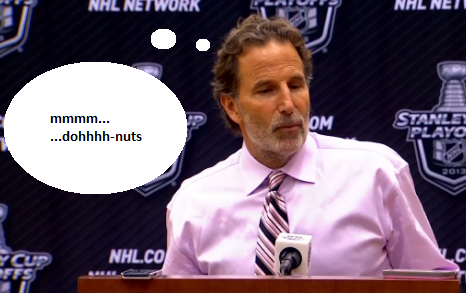 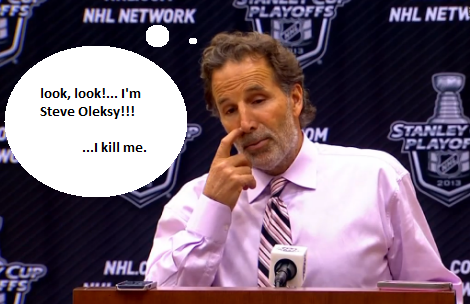 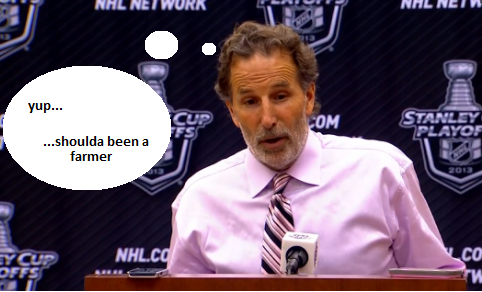 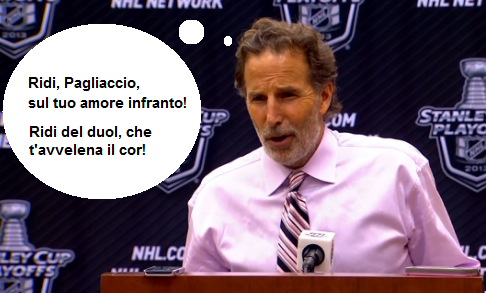 Laugh, clown,
at your broken love!
Laugh at the grief that poisons your heart!


One can only hope it is the Rangers feeling that grief come Sunday evening.  But in the meantime, on the Tort-o-Meter of Surliness, Coach gets a… 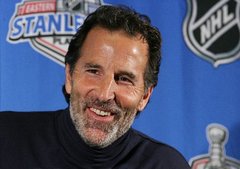 Posted by The Peerless at 9:09 AM No comments: 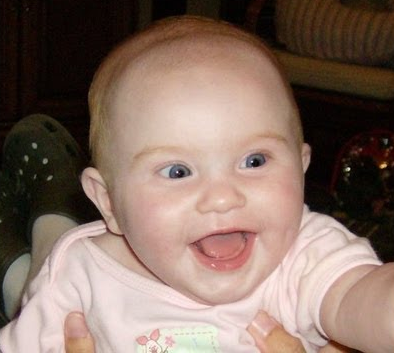 There will be another game at Verizon Center this season.

Oh, it might not be in this series, but there will be another home game.  The Washington Capitals saw to that last night with a 2-1 overtime win over the New York Rangers in Game 5 of their Eastern Conference quarterfinal series.

Mike Ribeiro sent Caps fans out into the night in a delirious state of mind when he swatted home a rebound of a Karl Alzner shot 9:24 into the extra session on a play that had the eerie look to it of another overtime playoff winner many years ago.

The play started with Karl Alzner and Mike Green exchanging passes at the top of the Rangers’ zone.  Alzner fed the puck to Green at the right point, and Green fired a shot that took a bite out of Ranger defenseman Ryan McDonagh.  The puck ricocheted to the stick of Ranger Derick Brassard, but his weak clearing attempt was gloved down by Green, who slid the puck over to Alzner.  Brassard tried to jump out to block the shot Alzner was winding up for, but Alzner’s shot sailed past Brassard’s right leg.  The puck hit Troy Brouwer’s skate and deflected to the doorstep to the left of goalie Henrik Lundqvist.  With Lundqvist down from trying to defend the Alzner shot, Ribeiro had an open left side of the net to shoot at, and he swiped it in from the same spot of the ice as the finish of another playoff ending from the Caps’ past…

-- The game-winning goal was due, in no small part, to the reach of Eric Fehr.  When the puck caromed off the left wing boards in the Ranger end, Fehr beat Anton Stralman to the puck with his long reach and one handed the biscuit out of Stralman’s grasp.  That small play was the start of the unfolding of the last sequence.

-- Speaking of which, the small things matter, Part I.  The Rangers won the faceoff following a penalty to Brian Boyle for slashing Ribeiro.  But Dan Girardi whiffed on his clearing attempt, and that allowed Marcus Johansson to slip past Girardi to control the puck and set up behind the Ranger net.

-- The small things matter, Part II.  The Caps power play goal will be remembered for the slick passing from Johansson from behind the Ranger net to Nicklas Backstrom at the right wing wall, back to Johansson, who sent a touch pass to Joel Ward in the high slot for the shot and the goal.  But the small thing that opened up Ward was perhaps this… 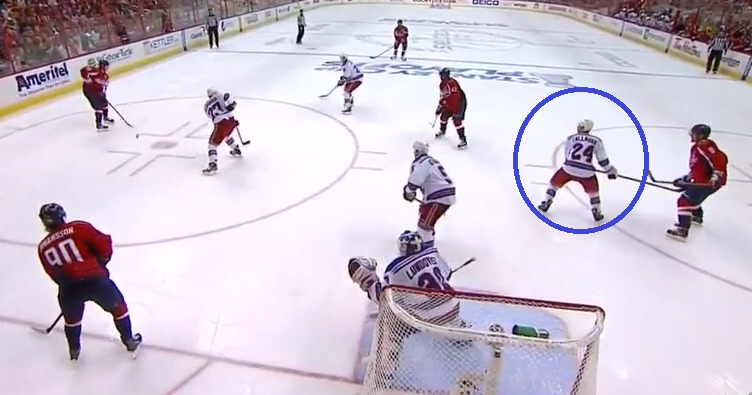 …Ryan Callahan guarding against the pass across the slot for the one-timer from Alex Ovechkin.  The captain did not register a point in this game, but he provided an effective decoy on this play.

-- Give Braden Holtby credit.  When the Rangers scored on their first shot of the game 53 seconds in, this could have gotten ugly quickly, especially given the circumstances of the goal.  The Caps got caught running around and chasing the Rangers in their own end and were in no position to do anything about Brian Boyle knifing to the slot to convert a feed from Brassard.  But Holtby was solid thereafter, stopping the last 24 shots off Ranger sticks.

-- And give the defense credit, too.  The Caps had those early jitters, but they clamped down hard on the Blueshirts, finishing the game with having allowed only 25 shots through in more than 69 minutes.

-- Part of that was having to block 30 shots.  Matt Hendricks, who does not yet have a point in this series, was a shot-blocking machine last night, turning away seven Ranger shots in just 9:12 of ice time.

-- Tom Wilson got his first taste of NHL action, getting 6:24 of ice time in eight shifts.  A shot on goal, a takeaway, and four hits.  Not a bad baptism.

-- We noted that the Caps were getting creamed in offensive zone draws in this series.  They were a little better last night (12-for-27, 44.4 percent), but it still needs work.

-- It might not be the best time to note this but… the second line of Ribeiro, Fehr, and Troy Brouwer had only five shots on goal in 69 minutes, Brouwer getting three of them.  Ribeiro had only one…the game-winning one.

In the end, the Caps ground one out.  It was not dominating from an offensive standpoint, but the defense seemed to get stronger as the game went on.  It is something to build on going into Game 6, at Madison Square Garden, where the Caps have not won a non-Gimmick game since Game 2 of last spring’s playoff series between these two teams.  Caps fans might remember that the game-winning goal in that game was scored by Alex Ovechkin.  It would be nice to repeat that history, just as last night’s game winner repeated some happy history for the Caps.

Posted by The Peerless at 7:31 AM No comments: