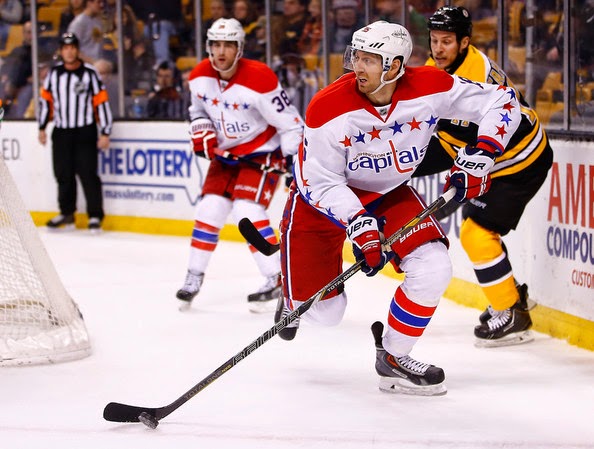 Eric Fehr was drafted as a right wing by the Washington Capitals in 2003, off the heels of a 26-goal season for the Brandon Wheat Kings in the Western Hockey League.  He skated two more years at Brandon – on right wing – posting a total of 109 goals.  He went on to the Hershey Bears where he played 121 games – at right wing – recording 50 goals in the process.

So there he was, an eight-year NHL veteran with 306 regular season and another 33 playoff games at right wing, jumping onto the ice in the second minute into the Capitals’ 2013-2014 season at United Center in Chicago… at center.

Fehr took the ice with Jason Chimera on his left and Joel Ward on his right as he embarked on a new career, NHL center, at the age of 28, not generally thought of as the ideal age, let alone the ideal setting, to learn a new position.

One would have to say, though, that all things considered it was a successful maiden voyage down that new career path.  Fehr finished with his second highest goal total in his career (13), tied for his highest career assist total (18), and his second highest point total (31).  This was done done primarily while centering the third line (we will come back to this).  How effective was he (and his linemates)?  The Fehr/Chimera/Ward trio combined for 43 even strength goals.  The top line, if you consider it as Alex Ovechkin/Nicklas Backstrom/Marcus Johansson, finished with 40 even strength goals.

Fehr was reasonably consistent in his ten-game segments, but he did have a dry spell in his fifth and sixth segments.  It was part of a 21-game stretch from December 30th through February 27th in which Fehr was 3-0-3.  It had its effect on the Caps’ fortunes.  Washington was 8-9-4 in those 21 games. 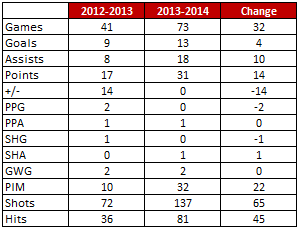 Cheerless’ Take… Yeah, and he was worse than Olli Jokinen (49.2), Steve Downie (49.6). and Blake Wheeler (49.9).  He was also streaky with his scoring.  Nine times this season Fehr recorded points in consecutive games, accounting for 24 of his 31 points overall.  He had four streaks of five games or more without a point in 73 games overall, including a ten-game streak without a point (part of a run of 17 games in which he had only one point).

Odd Fehr Fact… Eric Fehr was second to Nicklas Backstrom among the Capitals forwards in takeaways this season.  He had 50 takeaways to Backstrom’s 54 despite playing more than 500 fewer minutes (1,076 to Backstrom’s 1,623).

Game to Remember…  January 9th versus Tampa Bay.  The Caps rolled over to the new calendar year having lost their last two games in 2013 and dropping their first two in 2014.  More important, the Caps were sitting a point out of the top-eight in the Eastern Conference when they visited the Tampa Bay Lightning on January 9th.  Tampa broke first on a goal by Tyler Johnson just over four minutes into the game.  Less than three minutes later, Fehr struck.  Alex Ovechkin started the play by picking up the puck along the right wing wall at the Caps’ blue line and heading up ice.  As he crossed the Tampa Bay line, Mikhail Grabovski made a bee line for the net.  That opened up the middle for the trailer, who happened to be Fehr.  Ovechkin slid the puck to Fehr who, using Martin St. Louis as a screen, wristed it past St. Louis’ left leg and goalie Anders Lindback’s glove to tie the game.

The Caps would go out to a 3-1 lead at the first intermission, but the Lightning would come back with goals in the second and the third period to tie the game.  Then, with the clock winding down under a minute to play in regulation, Ovechkin fed Dmitry Orlov for a one-timer from the point.  Orlov’s shot was blocked by Ondrej Palat, but Orlov chased the puck down before it could skitter out of the offensive zone.  Orlov fed Mike Green at the right point, and Green threw the puck at the Lightning net.  Fehr outfought Tyuler Johnson for position in front of Lindback and managed to maneuver the shaft of his stick in the path of the shot, deflecting it past Lindback with 51.5 seconds left to give the Caps a 4-3 win.  The win lifted the Caps into seventh place in the East.

Game to Forget… October 22 versus Winnipeg.  One always wants to do well when going back home for a game.  When the Caps visited MTS Centre in Winnipeg in late October it was a chance for Eric Fehr to perform for the folks in Manitoba.  It did not turn out quite the way he might have hoped.  The Caps and Jets exchanged goals often after a scoreless first period.  Washington scored first, then the Jets took the lead with a pair of goals 70 seconds apart.  Then the Caps got a pair in just over a two minute span by Alex Ovechkin, but Winnipeg tied the game in the last minute of the second period.  The Caps took a lead early in the third period, but the Jets tied it barely two minutes after the Caps broke in front.  The teams would go to extra time tied, 4-4, then play a scoreless overtime.  The Caps would pull it out in the sixth round of the Gimmick on a goal by Martin Erat to win, 5-4.  For Fehr, though, it was his quietest night of the season.  Just 8:51 of ice time (his lowest of the season), no shot attempts, no hits, no takeaways, no blocked shots, and he lost five of six faceoffs.

Eric Fehr has carved out for himself, or perhaps Adam Oates carved out a new role for him.  Whether you believe one or the other, Fehr did a competent job when called upon for a player who had not played center on anything like a regular basis. That is not to say that Fehr is what the Caps need at the position if they are to challenge for a playoff spot next season, let alone a championship.  That begs any number of questions.  Was this year a hint that he takes to the position and there is upside to this?  He got by with diligence and hard work this season, but can he improve some needed skills (faceoffs, defensive awareness)?  Will he even play the position under a new regime?  Is there something to be said for keeping a Fehr/Ward/Chimera line together given that they were often the most effective forward line the Caps had this season?

Those are questions another time.  Looking at this season, Eric Fehr took on a new role and made something of it.  That it was not enough to get the Caps into the dance is not a reflection on that effort.  If others had been as adaptable (which goes for coaches as well), we would still be waiting to write this piece.