Home is where the heart is.  Home is where you hang your hat.  And in the NHL, home is where you need to pack away the points.  The Washington Capitals took home ice three times in Week 6 and had a chance to sweep the week, but the last goal scored at Capital One Arena for the week kept the brooms in the closet. 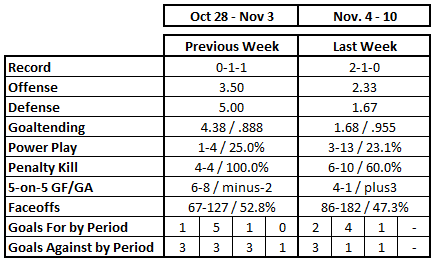 The highlight of the week, record-wise, was the Caps recording consecutive wins for the first time this season, and they did it by defeating their arch rival – the Pittsburgh Penguins – to get that second straight win.  They have been stuck in low gear for much of the early going, but in spite of their failure to get any consistent traction, they are still earning points, getting at least one point in ten of 15 games so far.  It has enabled them to hang around only three points out of first place in the Metropolitan Division with two games in hand over first place Columbus.  But it was the loss to the Blue Jackets to end the week that kept the Caps from finishing the week on top of the division.  It is a good thing that no club in the Metro has been able to pull away.  It is worth noting that the second wild card team – the Buffalo Sabres – finished the week with a record identical to that of the first place Blue Jackets (9-6-2).

What was the top scoring offense in the league stumbled in Week 6.  They had what was, for them so far, an average night against the Edmonton Oilers to start the week, posting four goals in the 4-2 win.  They managed only three goals over the next two games, splitting the decisions against Pittsburgh and Columbus.

T.J. Oshie had two goals, tied with Alex Ovechkin for the team lead for the week, both of them game-winners.  The second of them was especially satisfying, coming against Pittsburgh after he was high-sticked by defenseman Olli Maatta, requiring stiches near his left eye (no penalty called), and then elbowed in open ice by Evgeni Malkin, resulting in a major penalty and game misconduct for Malkin.

John Carlson led the team in points for the week (four assists) despite missing the last game of the week with a lower body injury.  It gave Carlson 13 assists in 14 games, fifth among defensemen in the league despite playing three fewer games than each of the four defensemen ahead of him.

What was concerning was the number of players without a point.  Lars Eller, Brett Connolly, Dmitry Orlov, and Andre Burakovsky are important elements in the secondary scoring scheme.  None of them recorded a point in Week 6.

Allowing 111 shots on goal for the week is a number distorted somewhat by the 42 shots on goal Pittsburgh recorded in the Caps’ 2-1 win on Wednesday.  That was a truly amazing outlier in the realm of fancystats.  Washington allowed the Pens 70 shot attempts at 5-on-5 to only 29 of their own.  It was, by far, the biggest negative shot attempt differential at fives this season for the Caps.  How big?  The minus-41 was twice as large as the next biggest negative instance (minus-20 against the Vegas Golden Knights on October 10th).  A still stranger point about that game.  It was the first time in 40 years that the Caps allowed 42 or more shots to the Pens while recording 22 or fewer of their own.  The only other time it happened in the history of the rivalry was January 21, 1978, when the Pens out-shot the Caps, 43-22, but fell to the Caps, 5-2.

The Caps were better than that in their win against Edmonton to open the week (minus-17).  Oddly enough, the Caps were even in 5-on-5 shot attempt differential against Columbus in what was the Caps’ only loss of the week.  Tight 5-on-5 defense sacrificed to poor penalty killing.  As it was, only four teams allowed more shot attempts at 5-on-5 in Week 6, but all four played four games to the Caps’ three.

The Capitals finally got a solid week of netminding with both goaltenders contributing.  Pheonix Copley got the call to start the week, and he responded with a solid 31-save performance in the 4-2 win over the Edmonton Oilers.  It was his second straight win, and he stopped 58 of 63 shots (.921 save percentage) in those two wins.

It was Braden Holtby who put up top notch numbers for the week in what was arguably his best week of the young season.  He was not rewarded with a second win in two appearances, but he stole the win against Pittsburgh with 41 saves on 42 shots, and he gave the Caps every chance to win in stopping 34 of 36 shots against Columbus.  Holtby was one of six goaltenders in Week 6 to face at least 20 even strength shots and stop all of them, and he did it facing more even strength shots (68) than any on that list.  He had the misfortune to face one of the other five in the last game of the week, Sergei Bobrovsky, who stopped all 51 even strength shots he faced, including all 27 in the Blue Jackets’ 2-1 win over Washington.

Week 6 was the worst week for the power play this season at 23.1 percent, but that number is still better than what 20 teams have achieved so far this season overall.  Week 6 also happened to be a week in which the Caps enjoy the greatest number of chances for a week this season, the 13 chances they had representing 25 percent of the total number of man advantages they had for the season at week’s end.  Still, they rank just 24th in power play opportunities.  That they are tied for the league lead in power play goals (with Boston, which also suffers from a lack of chances with just 53) is a reflection of how efficient is has been this season.

Alex Ovechkin had power play goals in each of the first two games of the week, bringing his total to six and the number of games in which he recorded at least one to five, all of them Capitals wins.  Those two power play goals tied and passed Marcel Dionne for eighth place on the all-time power play goal list.  Matt Niskanen had the other power play goal for the week, breaking a personal streak of 133 games without one, the last one he scored coming in a 4-2 win over the New York Islanders at Barclays Center on December 13, 2016. 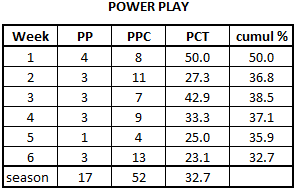 In a season characterized by poor penalty killing, the Caps had their worst week of killing penalties this season in Week 6, made especially disappointing after being a perfect four-for-four in Week 5.  And it was not as if teams pelted the Caps’ net with shots.  It might have been better if they did.  The Caps opened the week killing three of four shorthanded situations against the Edmonton Oilers, allowing one goal on six shots in 6:23 of shorthanded ice time, their best performance of the week.  Pittsburgh scored a power play goal on the only power play shot they recorded in 3:26 of ice time.  Columbus scored two goals on four shots in 4:53 of ice time.  On a shots per minute basis (0.75 shots per minute), it was a pretty good week.  The results say otherwise.  And while the Caps were dealing with injuries on the defense as the week ended (John Carlson and Brooks Orpik both absent against Columbus), the penalty kill has graduated from concern to problem that needs to be addressed. 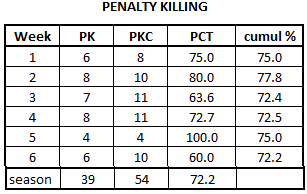 It was something of an average week in the circle for the Caps.  That would not be a compliment.  It was not that they were bad as much as they were not good.  Overall, the Caps were under 50 percent in the ends and only reached 50 percent in the neutral zone.  The good part was that the offensive centers did quite well in the offensive zone.  Nicklas Backstrom was 11-for-19 (57.9 percent), and Evgeny Kuznetsov was 13-for-22 (59.1 percent).  On the other hand, none of the three centers taking at least 10 defensive zone draws reached 50 percent.  Backstrom (34.8 percent), Kuznetsov (46.2 percent), and Lars Eller (45.5 percent) combined for a weak week.  Travis Boyd, who saw his first action of the season, was the only Cap taking at least ten draws overall who was over 50 percent in the ends, although it was with low volumes (2-for-3 in the offensive end, 3-for-5 in the defensive end). 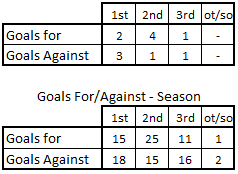 The Caps were among the most productive teams in second period scoring to open the week, and they only kept right on rolling in the middle 20 minutes, scoring four of their seven goals for the week in the middle frames of the three games.  By week’s end, only the Caps, Tampa Bay Lightning, and the Colorado Avalanche had a goal differential in the second period of plus-10.  The Caps suffered by comparison with the second and third periods the three goals they allowed in the first periods of games (one in each of the three games), but what was worse about that was twice allowing the first goal of the game on home ice, against Pittsburgh and against Columbus.  Playing at home brings with it the hope and expectation of putting teams down early and clamping down on them, but that didn’t happen in the latter half of the week. 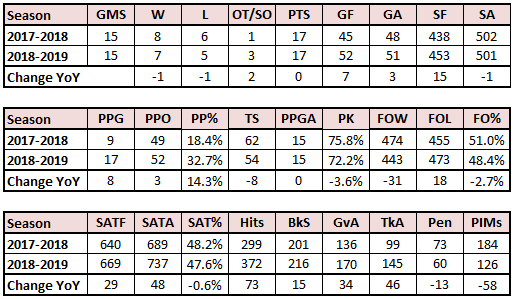 For all the fits and starts over six week, the Caps find themselves almost right where they were through the first 15 games as they were last season – 17 points.  How they got there, that is a bit of a different matter.  Through 15 games the Caps are scoring more than last year, but giving up more as well, and they continue to find themselves in a hole in shot differential, although it is not as deep as last year’s.

The power play continues to be well ahead of last year’s early pace, but while the penalty kill is not significantly different from last year’s edition, that is not a good thing, and there is evidence that this year’s group is slipping a bit.

The Caps have enjoyed the good fortune so far of playing in the “Mediocripolitan” Division.  Division-leading Columbus has the tenth-best record in the league, which is enabling a lot of teams, including the Caps, to hang around despite mediocre records of their own.  The Caps were just one period away from a sweep of the week, another example of the small margins that exist between success and something less in the NHL.  Only three points separate first and seventh place in the division through six weeks, giving almost every team a chance to be leader for a week.  The Caps could have been that, had they won the third period in the third game of the week.  They did not, and that means having yet again trying to gather some momentum as the schedule plods through November.