The Caps Week in the Mirror -- January 24th 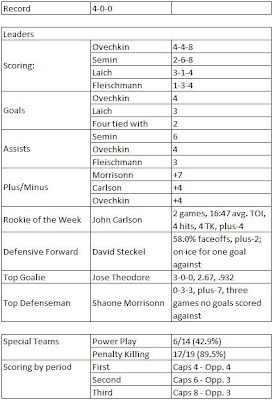 And you thought the Caps were hot... 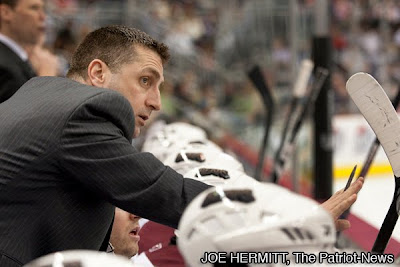 On December 11th, the Albany River Rats shut out the Hershey Bears, 3-0.

The Bears seem to have taken the matter rather personally. Since suffering that insult, the Bears have won 17 of 18 games to hit the 70 point mark (in 45 games, five games quicker than did the Caps) and open up a nine-point lead on the rest of the league. During this 17-1-0 run, the Bears…

In this run the goalies have done their part…

General Manager Doug Yingst has built quite a team up in Hershey, and Head Coach Mark French, along with assistant Troy Mann and the rest of the Bears’ staff have added to the Bears' reputation as being the flagship franchise of the American Hockey League.

No team has repeated as Calder Cup champion since the Springfield Indians did the trick in the 1989/90 and 1990/91 seasons. The Bears are serving notice to the rest of the AHL that they are not letting down after having won last year’s title.
Posted by The Peerless at 8:26 PM 4 comments:

The term usually has connotations of “hard working” individuals, and that was the Caps last night in knocking back the Phoenix Coyotes at Verizon Center, 4-2. Even Alexander Semin, who finished with a four point night (1-3-4), did so in as quiet and efficient a manner possible – he had the primary assist on three goals and scored one himself.

Brooks Laich got a goal by going to the net with his stick down (as he said any five year old knows how to do when describing his goal in the post-game radio show). Eric Fehr got one by stick-to-it diligence, collecting a rebound of his own attempted pass and, displaying a great set of hands, snapping the puck behind Coyote goalie Ilya Bryzgalov's shoulders and into the far corner of the net from a severe angle. Alex Ovechkin wrapped things up in the end by taking a feed from Semin and filling the empty net with 5.6 seconds left.

Michael Neuvirth shook off the effects of being pulled in his last two appearances, stopping 28 of 30 shots on the way to his sixth win of the year and the seventh time he has allowed two or fewer goals (6-1-0 in such instances). He was especially strong denying Vernon Fiddler on a breakaway less than two minutes after the Coyotes tied the game, 1-1, in the first period.

-- Nicklas Backstrom was held without a point last night, but did have four shots on goal (evidence of his continuing assertiveness with the puck) and won 12 of 19 draws. He is 6-4-10 in the last ten games.

-- Speaking of Green (and to all those folks who seemed to think him lazy and or ineffectual carrying the puck last night), let’s not forget why it was he missed Thursday’s game. He was said to have suffered a hand injury blocking a puck. If so, think such an injury, to a player who relies so much on his hands and feel in lugging the puck through traffic, might have had an effect on Green’s ability to be as smooth as he usually is? Against Pittsburgh, it would have been a problem (the Penguins would have made the Caps pay for turnovers more than the Coyotes seemed capable of doing), but a day’s rest probably made him at least functional in this regard.

-- That’s nine of 11 games for the month in which the Caps have scored at least four goals. The Caps have outscored opponents 50-29 for January.

-- Shaone Morrisonn continued his stronger play of late – another assist (three in his last two games) and contributed five hits.

-- Tomas Fleischmann had a strange night in this respect – he had more time on special teams (7:54 total) than he did at even strength (7:22).

-- Phoenix is among the most patient teams we’ve seen this year. Falling behind by one, coming back, falling behind by two, it was hard to see any real change in their play. But they are an offensively challenged group. Give Dave Tippett credit, though. He has them working hard for 60 minutes, and when you saw the Coyotes leave the ice at the end of the game, the body English they had (such as Keith Yandle splintering his stick on the ice) indicated that they felt they should have won.

-- Brendan Morrison got only three shifts in the third period. He seems to be fighting himself at the moment. He did win eight of 11 draws (making him 16 up and three down for the last two games).

-- Karl Alzner… plus-1, one hit. A very quiet score sheet. But you didn’t see him on the ice for a Phoenix goal, either, in 13-plus minutes of ice time.

-- Speaking of defensemen and ice time, it was well-managed. Looking at the even-strength ice time, no one among the six Caps defensemen had more than 15:01 (Tome Poti), no one had less than 12:23 (Jeff Schultz).

-- Eight Caps had more power play ice time than Phoenix’ Paul Bisonnette had in total for the night (4:46).

-- In killing all five Phoenix power plays, the Caps are now 14-for-14 in their last three games.

-- Three six-game winning streaks for the Caps… they lead the league in that measure.

-- The 2-for-7 night on the power play makes it five times in the last eight games that the Caps have netted at least two power play goals in a game. They have at least one in their last five, and they are 14-for-39 for January (35.9%).

All in all, it was a “men-at-work” sort of game. The offense ground out some tough goals, the penalty kill was perfect in four tries, the goaltending was solid (and even better when it had to be). And this in a game that was widely viewed as a “trap” game – a contest against a good, if somewhat unknown team, coming on the heels of a trio of tough tests that the Caps passed. The Caps tended to business, punched the clock and put in a solid 60 minutes of effort. They earned the day off from practice, finishing up one of the best weeks in recent memory…

Is there a way to bottle this for use in May and June?
Posted by The Peerless at 9:21 AM 2 comments: