The Peerless Prognosticator is ON THE AIR!!! -- Game 39: Capitals at Sharks, January 7th

Well, we can hope. The Caps last won a hockey game in San Jose on October 30, 1993. That was 6,642 days ago. It would not surprise anyone to know that Peter Bondra scored a goal in that game. The Caps also had goals from Craig Berube, Keith Jones, and Mike Ridley. Brian Curran (we are not making this up) was plus-2 for the Caps. If you knew Brian Curran was once a Cap, you spend too much time watching hockey.

Among current Caps, Dmitry Orlov was two years, three months, and seven days old in Novokuznetsk, Russia. Marcus Johansson celebrated his fourth birthday just 24 days earlier in Landskrona, Sweden. John Carlson was a four-year old perhaps dreaming his first dreams of scoring a tournament-clinching goal. Mike Knuble was still at the University of Michigan, on his way to a 32-goal season for the Wolverines in the only year during his four years in Ann Arbor that his team would not reach the NCAA Frozen Four.

But as for the current editions of the Capitals and Sharks, here is how they fallout, numbers-wise: 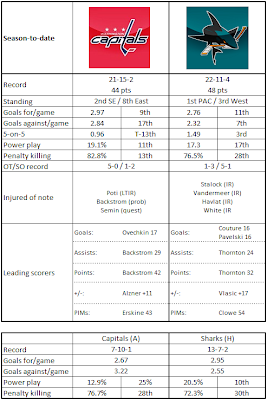 (click pic for larger image)
Both teams are coming in on streaks. San Jose has won three in a row, allowing only four goals in the process. On the other hand, they have scored only seven. Washington comes in on a four-game streak, having allowed only five goals in those games while scoring 14 of their own.

1. Although the Sharks are 4-1-1 in their last six games, they have done it while struggling on the power play. They are only 2-for-23 in those six games (8.7 percent).

2. No player having played in at least 30 games for the Sharks so far this season is playing to lower than a plus-1. Five Sharks are plus-10 or better (only one Capital – Karl Alzner – is in plus-double digits at plus-11).

3. The Sharks have won five games via the Gimmick; Ryan Clowe has three of the game-winners.

4. Only Boston (47) has allowed fewer 5-on-5 goals than San Jose (49). Oddly enough, only three teams have allowed more goals at 4-on-4 (Carolina, Ottawa, and Columbus). More from the goals-allowed department, only Ottawa has allowed more power play goals at home than the Sharks

5. San Jose can beat you close, and they can beat you big. The Sharks are one of only six teams that have a better than .500 record in one-goal, two-goal, and three-or-more goal decisions. Not even the Boston Bruins are in this group.

1. Alexander Semin has gone four games without taking a minor penalty. It might not sound like much, but it is his longest penalty-free streak of the season. He has not had a longer one since a seven-game streak from January 8th through February 20th of last season.

2. The Capitals like space. No team has more than the nine 4-on-4 goals scored by the Caps so far this season, and they have a sizable lead on the three teams tied for second, who have six goals apiece.

3. Shooting the puck seems to agree with them, too. Only two teams have better records than the Caps’ 12-5-0 record when outshooting the opponent.

4. You wonder where the offense will come from against San Jose. The Caps’ skaters have a combined 31 goals in 187 man-games against the Sharks. Twelve of them come from Mike Knuble (20 career games) and Jason Chimera (22 career games), who have six apiece.

5. Do not expect to see Michal Neuvirth breaking Tomas Vokoun’s streak of appearances. Neuvirth has never beaten San Jose (three decisions) and has a 3.37 GAA and .897 save percentage to go with it.

Joe Thornton is the axle around which the wheels of the Sharks’ offense turn. Often accused of not shooting enough (he is seventh on his own team in shots on goal), he is among the most adept passers in the game (fourth among active players in career assists). But it is the power play that is of concern here. Thornton is 12-20-32 in 33 career games against Washington, 6-8-14 of that on the power play. If he is left unmolested to conjure his magic, it could be a long night for the visitors.

Yes, there is the whole 25 games without a goal thing going on, but Joel Ward does have four goals in 11 career games against the Sharks, including a goal in his last visit to San Jose with Nashville last March. The Caps need to get some more frequent and more reliable scoring from him and his line to extend this recent run of success for the Caps. There is no better time or place to start than in San Jose tonight.

1. If you can’t make it plain, make it special. Both teams have scored 73 goals at 5-on-5 this season, but while the Caps have allowed 79 goals at full and even strength, the Sharks have allowed only 49. On the other hand, the Caps are only 3-for-20 on the power play in road games under Dale Hunter (15.0 percent) and 21-for-27 on the penalty kill in road games (77.8 percent). The key here might be San Jose’s poor penalty killing record at home – dead last in the league.

2. Focus with a lead. Only four teams have more third period goals than the Caps. They might need some. Only two teams have more wins than San Jose when allowing the first goal of the game.

3. Key on Big Three, but beware the surprises. Three Sharks have more than ten goals – Joe Pavelski, Logan Couture, and Patrick Marleau (the Caps have five such players) and only seven with as many as five goals (the Caps have nine). But surprises lurk on the Shark roster – Jamie McGinn has five goals of his eight goals in home games, for instance. Ryan Clowe has six of eight on San Jose ice. The undercard can kill an opponent here.

In the end, all good things come to an end. That goes for all bad things, too. And this has gone on long enough. The Caps recent run of success has a more authentic feel to it, beating teams with solid play on both sides of the puck with all four wins being multi-goal decisions. San Jose’s three game streak includes one multi-goal decision and includes one in a Gimmick. Two of the wins came against two of the weaker teams in the West – Anaheim and Columbus. Of course, we like the Caps’ chances to end all this nonsense.