“If I could I would always work in silence and obscurity, and let my efforts be known by their results.”
-- Charlotte Bronte

When the unrestricted free agent signing period begins, everybody signing a contract gets their 15 minutes of fame, stars and journeymen alike.  The lights continue to shine on the stars who sign the big deals, while those of more modest skills signing lesser deals (even if rich by fans’ standards) retreat into obscurity.

When the Caps signed forward Richard Panik on the first day of the free agent signing period in July 2019, one might have concluded that he fell into the latter category, that group of players who get their due in the press and then return to toil in obscurity.  Panik came to the Caps as a seven-year veteran who played for four teams (Chicago, Tampa Bay, Arizona, and Toronto) and who posted 75 goals and 159 points in 410 career regular season games.  In discussing his assets, flaws, and potential, the TSN.ca scouting report said:

“Has loads of skill and a good frame for the National Hockey League game.  Displays excellent scoring instincts and pretty good hockey sense.  Can also play a two-way game.  Where is the consistency?  He must become a bigger factor game in and game out in the NHL.  Also needs to use his solid frame more to his advantage at the highest level.  Solid, inconsistent two-way winger with a little upside.”

His was a profile of a bottom-six winger who could provide some occasional offensive punch.  Or so one might have thought.  Panik started the Caps phase of his career going without a point in his first 12 games.  He snapped that drought with a goal against Anaheim on November 18th, but it hardly set off a scoring binge.  Panik had a pair of goals – his only points – over a 11 game stretch starting with that game against the Ducks.  The lack of production over those first 23 games might have influenced his ice time, given he averaged barely nine minutes over his next five games, giving him a scoring line of 3-1-4 in his first 28 games with the Caps.

But then, things took off.  Panik posted points in consecutive games for the first time as a Cap in late December, and it set him off on a 31-game finishing run in which he went 6-12-18, plus-10.  Those 18 points starting December 27th through the end of the regular season tied him with Tom Wilson and Carl Hagelin for eighth-most on the club, and his plus-10 was topped only by Michal Kempny (plus-11).  His 18.8 percent shooting percentage over that span was third-best on the team, trailing only T.J. Oshie (20.3) and Alex Ovechkin (19.4). 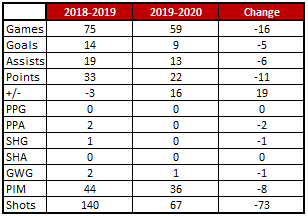 Were the Caps successful when Panik turned on the red light? They were 6-2-0 when he scored a goal, so, yes.  When he recorded a point?  They were 12-5-2.  So, yes again.  When he got more minutes?  They were 10-4-1 when he skated at least 13 minutes.  Check the “yes” box.  When he was engaged on offense? The Caps were 11-6-1 when he posted two or more shots on goal.  Did Panik check the boxes for “secondary contributions matter?”  Yes.

Did it really matter, cuz?  In those 31 games to close his season in which Panik scored those 18 points, the Caps went 15-13-3.  And he had a strange stat in those 31 games.  He was the only forward with a shot attempts-for percentage a 5-on-5 when behind under 50 percent (48.4), and only defenseman Martin Fehervary (who played in only three games) was lower (44.0).

Odd Panik Fact… Richard Panik was a second-round/52nd overall pick of the Tampa Bay Lightning in 2009.  Of the 44 players taken higher in the draft in Lightning history dating back to 1992, only nine have played in more NHL games than Panik (469).

Odd Panik Fact II… When Panik scored a goal in the first round robin game this postseason, it was his first postseason goal of any kind in his career, in his 13th postseason game.  It came against the team that drafted him, the Tampa Bay Lightning.

Game to Remember… March 7, 2020.  In recent years, there is little doubt that the Pittsburgh Penguins are the Capitals’ chief rival.  And sooner or later, whether a player is home grown or obtained by trade or free agency, they are integrated into that rivalry.  Richard Panik’s “Penguin Moment” might have come in a game in Pittsburgh in early March, what would prove to be the penultimate game of the regular season.  The Caps got out of the gate quickly, Nic Dowd giving them a lead less than two minutes into the game, Panik getting the secondary assist on the goal.  Late in the period, Nicklas Backstrom put the Caps up, 2-0, but they were not finished.

Garnet Hathaway won just enough of a puck battle just inside his own blue line to force the puck into the neutral zone where Dowd collected it.  He sped down the left side, and with Conor Sheary backchecking for the Pens to try to foil a 2-on-1, Dowd slid the puck into the middle to Nick Jensen filling in as the late third man on the rush.  Jensen found Panik below the right wing circle, but the pass was put on Panik’s backhand.  Deftly moving the puck to his forehand, Panik batted it past goalie Matt Murray, and the Caps went to the first intermission up, 3-0.  The goal would prove to be the game-winner in the Caps’ 5-2 win, and he would finish with his second two-point game of the season.
Game to Forget… January 11, 2020. It’s one thing to lose.  It is another to lose at home.  And to lose big.  And to take a stick to the face in the midst of the unpleasantness.  Richard Panik would experience all four when the Caps hosted the New Jersey Devils in early January.  Things did not start out especially bad for the Caps, although it would be the Devils drawing first blood with the only goal of the first period, Panik on ice for that tally.  The Devils scored again early in the second, and then the evening would come to an abrupt end for Panik.  Skating his first shift of the second period, he took a high stick in the face from Miles Wood, ending his evening with five shifts and four minutes in ice time (lowest in both categories for his season).  For his part, Wood received a double minor for high-sticking, and the Caps scored a power play goal.  It would be their only goal in a thoroughly forgettable 5-1 loss to the Devils.

Panik had that goal against the Lightning in the first game of the round robin, and then… It was his only point in eight games, over which he recorded only eight shots on goal, 12 hits (half of them in the Caps’ Game 1 loss to the Islanders in the first round),two blocked shots, and six penalty minutes.  It was for Panik, like others among the bottom-six forwards, a very quiet, very unproductive postseason.

Richard Panik is one year into his four-year/$11 million contract with the Caps.  Whether that contract is a bargain or a burden depends largely on which Panik shows up going forward, the one who posted weak numbers in the first 28 games of his season, or the one who closed with a rush.  He will not turn 30 until next February, so it is reasonable to hold out hope that the finish he had was more indicative of his potential contributions, having endured the “acquaintance” trials of his first few months in the organization.

Taken as a whole, Panik’s season was not bad, but neither was it good.  His per-game production numbers were slightly off from those he posted in his previous stops, a season and a half in Arizona and parts of three seasons in Chicago.  The Caps were hopeful he would settle into a third line/right wing role, and at season’s end, the matter of whether he could fill that role adequately and productively was not settled.