So here we are in the desert of the hockey calendar that is August, and we’re sitting around thinking of things to think about. The Caps have made all those changes, and we now have only rookie and training camp to look for…


“Ever think about all those moves and all those players who left?”
Yeah, so?


“The League of Extraordinary Caps Third and Fourth Liners?”
Cute…but what about this team? 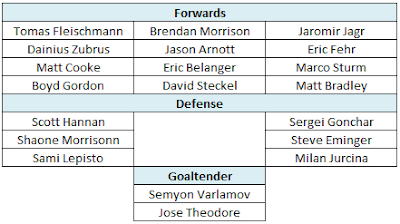 I can see you put a lot of work into this.


“yeah…I used colors and everything.”
Two Czechs on the top line…


“OK, it’s a work in progress.”
Odd thing about that team.


“What’s that, cuz?”
Eight of those 20 players played in that 2010 first round playoff loss to the Canadiens.


“So cuz, think this team could make the playoffs?”
When singing pigs fly out of my butt.


“What’s sports talk radio got to do with it?”
Good point…

Posted by The Peerless at 6:56 PM No comments:

Some say radio is dead. Actually, I’ve been hearing that for years. But in my experience there is little that compares as a sports fan to listening to a ball game on the radio on the porch in summer or piling into the car after a cold winter night in a hockey rink to listen to the recap on the radio when heading home.

As to the latter, there are changes in two cities, two hours apart, involving a pair of veteran play-by-play broadcasters that will have their effects on how hockey fans in Caps Nation fulfill their radio fix. Steve Kolbe ends his 12-season run as the radio voice of the Caps. Anyone who spends much time listening to the teams they root for on radio knows that every play-by-play announcer has his own style, and chances are that any of those fans could identify their play-by-play guy instantly. Kolbe’s rhythmic inflection (A-lex-o-VECH-kin) is something that Caps fans who listened to radio could probably mimic without too much effort. It is a style that made Kolbe’s voice their radio voice of Caps hockey. Add to that his work supporting other causes through hockey (for example, his participation in the Dave Fay Classic Charity Hockey Game and Auction), and he’s going to be missed. We wish "The Iceman" all the best.

But for those Caps fans who have not had the pleasure of listening to Hershey Bears hockey broadcasts, are you in for a treat. It is no overstatement on our part that one of the joys of driving up to Hershey to watch the Bears in action from time to time has been having the chance to listen to John Walton on the post game show as we were leaving the Giant Center parking lot. And listening to him do play-by-play on Internet broadcasts of Bears games was just one more of the things that made Bears hockey the gold standard of performance in the AHL. We still have Game 6 of the 2010 Calder Cup final on DVR to revisit from time to time to listen to Walton as much as to watch the Bears come all the way back from an 0-2 deficit in games to win the franchise’s 11th Calder Cup. His distinctive voice and ability to convey what is happening on the ice crisply and with the sense of urgency that the sport of hockey demands is going to make him a “must-listen” source of Caps hockey before too long.

John Walton will be only the third radio play-by-play announcer the Caps have had as they embark on their 37th season, Kolbe and the legendary Ron Weber being the others. It seems only fitting that he comes to Washington from Hershey, since there are so many – both on the ice and behind the bench – who have taken that same path to Washington. In Hershey, his signature call at the end of every victory of, “Good Morning, Good Afternoon, and Good Night,” was heard three times in the last six seasons in a championship-clinching game for the Bears. It never got old for the folks in Hershey. Let’s hope his new audience gets to hear one of their own in the Caps’ last game of the season next June.