The Peerless Prognosticator is ON THE AIR!!! -- Game 52: Capitals at Predators, February 9th

The Washington Capitals, having played six of their last seven contests against Metropolitan Division rivals, take a respite from the divisional wars to undertake a three-city, five-day tour of the Central Division this week.  Their trip starts with a visit to Nashville to visit the Predators on Tuesday night.  The Predators, so named for their logo – a saber-toothed cat, the remains of one having been discovered in an excavation of a site in 1971 that later became the site of an office tower named for a series of banks…

“Did you know that the saber-toothed cat is of the extinct genus, ‘Smilodon,’ cousin?

Why no, Fearless, I didn’t.

“Whatever…but Don sure smiles a lot…”

Guys, can we?  The Predators come into this contest looking as if they have righted a ship that was listing in early January.

“Was that ship named the ‘Smilin’ Don?’”

Ugh…no, Cheerless, it was not.  Anyway, since the Predators suffered a 2-6-2 slump to close 2015 and open 2016, they are 5-2-0 in their last seven games and have taken over the first wild card spot in the Western Conference playoff race.  They have done so without resorting to scratching out close decisions.  In outscoring their opponents by a 21-13 margin, three of the wins were by margins of three or more goals.  Oh yes, they did have a pair of one-goal decisions in there, too.

In putting together that 5-2-0 record, the Predators have been able to do something Caps have not over the last couple of weeks – score on the power play.  Not with great regularity, perhaps, but they are 4-for-24 in those seven games (16.7 percent).  Their penalty kill had been perfect in 16 shorthanded situations over the first five games of this stretch, but they were 5-for-8 in their last two contest (a loss to the Philadelphia Flyers and a win over the San Jose Sharks) to go 21-for-24 overall (87.5 percent).

Ryan Johansen has been just about everything the Predators and their fans might have hoped for when he was acquired from the Columbus Blue Jackets for defenseman Sean Jones in early January.  In 13 games with the Predators, Johansen is 4-10-14, plus-5, that plus-minus already ranking third on the team, and his three power play goals is tied for third on the club.  Over the Preds’ 5-2-0 run of late, Johansen leads the team in total points (2-5-7).  He is 4-5-9, even, in 12 career games against Washington.

Shea Weber is in his 11th season in the NHL.  In his previous ten seasons he received votes for the Norris Trophy as the league’s best defenseman eight times and was a finalist in the voting three times.  Alas, he has not yet won the award.  He is a bit of a throwback.  In an age that seems to prefer the offensive talents of an Erik Karlsson (a two-time winner) or the electricity of a P.K. Subban (the 2013 winner), Weber is that old-timey two way defenseman who can beat you with a booming shot from the point in the offensive end or by clearing you out in the corner in the defensive end.  This season, he is fifth among all NHL defensemen in goals, eighth in points, and 18th in credited hits.  Since he came into the league in 2005-2006, no defenseman in the league has more goals (160), and he ranks seventh in credited hits.  He is also 3-3-6 over the Predators’ last seven games to lead the team’s defensemen in scoring.  In ten career games against the Caps, Weber is 3-6-9, plus-5.

Goaltender Pekka Rinne is another of those often-close-but-no-cigar trophy candidates.  He was a finalist for the Vezina Trophy as the league’s top goaltender in three of the last five seasons, one of the seasons in which he was not have largely been lost to injury.  There is a hint of inconsistency in his game from season to season, though.  In his three Vezina finalist seasons he posted an aggregate save percentage of .925.  In the two in which he did not, his save percentage was .907.  So far this season, Rinne’s save percentage is .904, which would be his career low as the Predators’ full-time number one netminder.  He does, however, come into this game on something of a roll.  Appearing in six of the Predators’ games over the 5-2-0 run, he is 4-2-0, 2.01, .921, and has allowed a single goal in four of those games.  Despite being in his tenth season with the Predators, Rinne has only two career appearances against the Caps, both of them wins, with a 2.00 goals against average and a .941 save percentage. 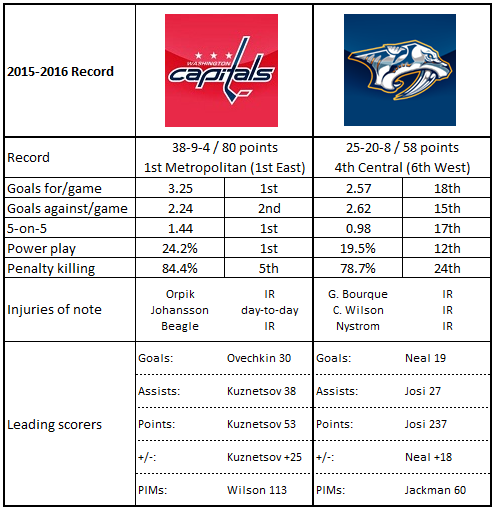 1.  If shot suppression means something, the Predators are a suppressive lot.  They are allowing the fewest shots on goal per game in the league (26.5).  Their plus-4.1 shot differential per game is second in the league to the Montreal Canadiens (plus-4.2).

2.  Nashville does not do a very good job of coming back late in games.  Their .100 winning percentage when trailing after two periods (2-15-3) is tied for the sixth-worst record in that statistic in the league.

5.  The shot suppression turns into rather impressive possession numbers at home for the Predators.  Their overall Corsi-for at 5-on-5 (55.0) ranks third in the league.  They finished above 60 percent 12 times in 26 home games this season (numbers from war-on-ice.com).

2.  The Capitals have gone five games without a power play goal, the first time they went that long without one since Games 44-48 in mid-January of the 2013-2014 season.

5.  After a stretch of nine road games in which the Caps were under 50 percent Corsi-for at 5-on-5 (43.1 percent overall), they are 51.0 percent to the good over their last nine road contests (numbers from war-on-ice.com).

Mike Ribeiro played in his 1,000th NHL game last Saturday when the Predators defeated the San Jose Sharks, 6-2.  It was a highlight in a season that does not rank among his best.  With six goals in 53 games he is on a pace to finish with fewer than ten goals over a season for the first time since 2002-2003, when he had five goals in 52 games for the Montreal Canadiens.  He is averaging less than a shot on goal per game for the first time since he had no shots in two games with the Canadiens in 2000-2001.  Never very good at taking faceoffs (only once in 15 seasons did he finish over 50 percent), he has been awful in that area this season, winning 38.7 percent of the 499 draws he has taken.  Among 135 players taking at least 250 draws, only Vancouver’s Jared McCann (34.5 percent) and the New York Rangers’ Kevin Hayes (33.2 percent) have been worse.  Ribeiro is 2-9-11, plus-3, in 22 career games against the Caps.

Mike Richards has been a Washington Capital for eight games.  In that span of competition he has yet to register a point.  But when a player has as much experience as Richards, he can contribute in other ways.  For instance, he is 50.8 percent Corsi-for at 5-on-5 over those eight games.  He has won 54.5 percent of the faceoffs he has taken, a plus in the absence of Jay Beagle in that regard.  He has only been on ice for four goals against over those eight games.  He averaged 1:55 in shorthanded ice time per game, fourth among forwards.  Goals and points are important, but so is the detail work that serves as the mortar for the bricks in a successful season.  Richards is 6-4-10, minus-3, in 17 career games against Nashville.

In a way, this week is a measuring stick for the Caps.  Three capable Western Conference opponents, two of whom they have yet to face this season, including the Predators (the Minnesota Wild are the other).  The Caps have a sparse history of games in Nashville, and what they have is not awe-inspiring (4-5-1-1.  They have not won in Nashville since October 2010, a 3-2 overtime win that featured goals from Alexander Semin and Tomas Fleischmann, plus an overtime winner by Brooks Laich.  The Caps have not won a game in regulation in Nashville since March 2008, a game in which Jason Arnott and Martin Erat played…for the Preds, before they became Capitals.  It’s been a while.  But, as we all know by this time, these are not those Capitals, and that will make for a happier ending than the team usually has in Tennessee.