The Washington Capitals played four games in Week 17, each with its own story line.  There was the first of a two-game set with the New York Rangers in which Tom Wilson engaged in rough stuff with Pavel Buchnevich, Ryan Strome, and Artemi Panarin, taking 14 minutes in penalties for his trouble, and Panarin being injured to end his season.  Then there was the rematch with the Rangers that featured an inspirational performance by T.J. Oshie, who returned to play on Wednesday after the passing of his father, Tim “Coach Osh” Oshie early on Tuesday morning to record a hat trick, not to mention 140 minutes in penalties taken by the two teams in the aftermath of the unplesantness in the first game of the set.  There was the first a two-game set against the Philadelphia Flyers in which the Caps looked emotionally spent and played flat in their only loss of the week.  And then there was the rematch with the Flyers on Saturday in which the Caps were missing almost every key offensive player, lost Wilson and Oshie to injury during the game (Wilson returned, Oshie did not), did not hold a lead in regulation, and scored with 40 second left to tie the game before winning in overtime.  It was a month’s worth of stories and action packed into the last full week of games of the Capitals’ regular season. 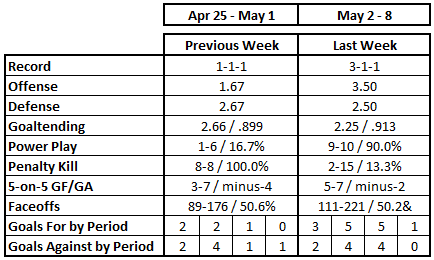 When Week 17 began, the Caps controller their own destiny with respect to the East Division.  Win out, and they would win the division.  Even when the Caps lost to the Flyers in the first game of their two-game set on Friday, the Caps still remained in control, but by a razor thin margin.  They had to win their last two games in regulation, which would give them 30 wins in regulation, one more than the Pittsburgh Penguins, who ended their season on Saturday night with a 1-0 win over the Buffalo Sabres, their 29th win in regulation for the season.  But when the rematch against the Flyers went to overtime, the Caps’ chances to win the division vanished.  While the Caps could tie the Penguins in regulation wins with a victory over Boston in their season finale on Tuesday, the Caps would lose the battle based on regulation-plus-overtime wins, 34-33.

Nevertheless, given the circumstances of Week 17, it was a very successful week.  Consider that by the time Lars Eller potted the goal in overtime to give the Caps a 2-1 overtime win over the Flyers, the Caps were missing Alex Ovechkin, Nicklas Backstrom, John Carlson, Evgeny Kuznetsov, and Oshie.  That is 80 of the 186 goals scored by the Caps through Week 17 (43.0 percent).  And yet, they managed three wins, their sixth week in 13 in which they played three of more games that they won three or more games.

The week, while successful, did not keep the Caps from stumbling to the finish.  While the Caps were tied with six other teams with three wins to lead the league for the week, they are 12-7-1 since April 1st, and while that is a good record, it is tied with Tampa Bay for 11th-best in the league (by points percentage). 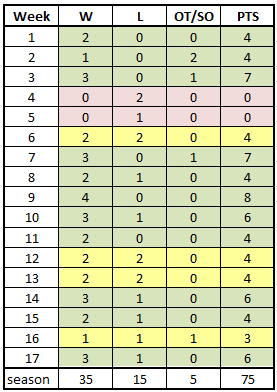 The Caps had eight players share in the ten goals for the week, led by T.J. Oshie with four, despite his missing the first game of the week and the last 24:13 of the game due to a lower-body injury suffered in the last game of the week.  His team-leading goal production was a product of his hat trick against the Rangers in the second game of the week, the fourth hat trick of his career and second with the Caps.  Nic Dowd, Daniel Sprong, and Conor Sheary each had a pair of goals for the Caps.  Each of them had a game-winning goal for the week, the power of the unsung stepping up.

It was shared success for the Caps as far as points were concerned, 17 of the 21 skaters appearing in Week 17 recording points.  Oshie, Dowd, and Dmitry Orlov led the club with four points apiece, while an additional 11 posted two points.  Zdeno Chara was the only Capital appearing in all four games who did not register a point.

With Alex Ovechkin out of the lineup with a lower-body injury for all but 39 seconds of ice time for the week, the shots on goal were spread around a lot more.  Six Caps recorded ten or more shots on goal, led by Sheary with 16.  Even Trevor Riemsdyk had ten shots on goal.  His seven shots on goal against the Flyers to end the week were a career high in shots on goal for a single game.  Of the six Caps recording ten or more shots, Anthony Mantha (12) and John Carlson (10) were the only ones not to score a goal.  Mantha has not had a goal on 23 shots in nine games since he opened his career the Caps with goals in each of his first four games.

The Caps did a good job in limiting shots on goal for the week, holding the Rangers and Flyers to an average of 26.3 shots per game over the four games, eighth-lowest average for the week.  The Rangers have not been the most prolific shooters over the course of the season (28.7 shots per game/25th in the league), but the Flyers are a top-ten team in that category (30.2 shots per game/tenth).

The Caps also did a respectable job in limiting shot attempts, allowing 136 shot attempts-for at 5-on-5, eighth-fewest in the league and second-fewest among teams playing four games (Boston: 122).

In terms of scoring, the Zdeno Chara/Nick Jensen pair struggled at even strength, Chara on ice for six of the seven goals scored against and Jensen on ice for five of them.  Brenden Dillon was the only Capital appearing in all four games who was not on ice for a goal scored at 5-on-5.

For the most part, it was Vitek Vanecek’s net in Week 17, Ilya Samsonov being suspended for unspecified reasons (late for a team function was the explanation) and then going on the COVID-protocol list.  Vanecek had a 2-1-0 week, a decent one for wins and losses, but his .893 save percentage left something to be desired.  It was the second periods of games that did him in with 21 saves on 25 second period shots face (.840 save percentage).  He also struggled at even strength, his .873 save percentage at evens ranking 48th of 65 goalies to appear in Week 17.

With the Caps playing back-to-back games against the Flyers to end the week, Craig Anderson got the nod in the Saturday game, his second start for the Caps this season and first since February 21st.  Anderson won his second game in as many starts, stopping 28 of 29 shots in the overtime win over the Flyers.  It was Anderson’s 291st career win, good for tenth place among active goaltenders.

Missing Ovechkin and having Carlson in and out the lineup was one thing in terms of its effect on the power play, but by the end of the week, the Caps were missing Ovechkin, Carlson, Nicklas Backstrom, Evgeny Kuznetsov, and T.J. Oshie – the Caps’ first power play unit.  In the week-ending game against the Flyers, Justin Schultz (5:21 in ice time), Dmitry Orlov (2:50), Daniel Sprong (3:11), Lars Eller (2:38), Anthony Mantha (5:08), Tom Wilson (5:01), and Conor Sheary (2:59) logged at least two minutes of power play ice time.  Even with the Caps scoring both power play goals (both by T.J. Oshie) on seven opportunities in a penalty fest in New York in the second game of the week, it was hardly a surprise that the Caps had an off-week on the power play.

It was hard enough to go through a 2-for-15 week with the man advantage, but the Caps scored those two goals on 30 shots (6.7 percent shooting) over 26:59 in power play ice time.  Anthony Mantha led the team with five power play shots on goal, while Justin Schultz, Dmitry Orlov, and Lars Eller each had four. 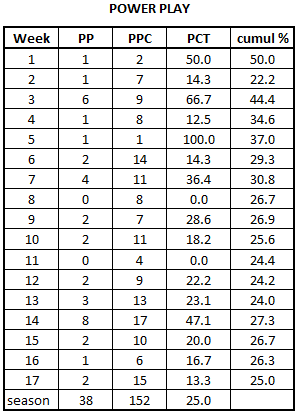 It was a better week on the other side of special teams, where the Caps finished at or above 90 percent for the seventh week this season.  Over the last two weeks they are 17-for-18 (94.4 percent).  Holding teams to 2.5 chances per game was a good thing, as was killing of the last eight shorthanded situations, including 27 seconds of a 5-on-3 Ranger power play in the second game of the week.  The Caps did it by limiting the shot total to 17 over 17:45 in shorthanded ice time. 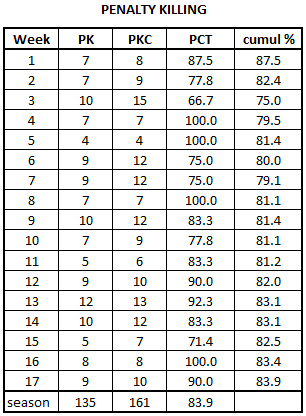 Week 17 was basically a break even week for the Caps overall, but there was a vast difference in their performance in the ends.  In the offensive end, the Caps won just 34 of 84 draws (40.5 percent).  Lars Eller in particular had a devil of a time, winning just six of 31 offensive zone draws (19.4 percent).  The was the difference between the 40.5 percent result and a 50 percent outcome, had Eller managed to win half of his draws.

In the defensive end, the Caps did much better overall, winning 40 of 69 faceoffs (58.0 percent), with every Capital taking at least one draw finishing over 54 percent. 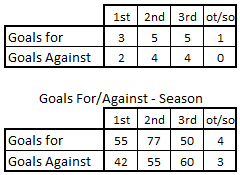 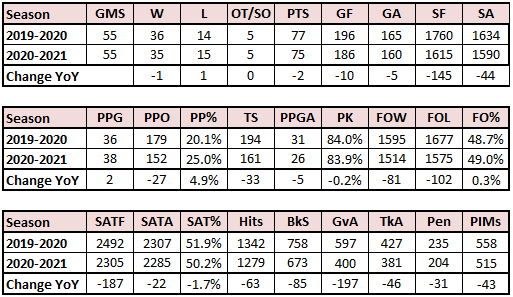 Week 17 had everything for the casual and the rabid Capitals fan.  Scoring, line brawls, inspirational efforts, players stepping up in the face of adversity, grit, and determination.  What it did not have was star wattage with the absences of so many gifted offensive players due to injury.  That is what Week 18 is going to be about – getting healthy and whole.  Having clinched second place in the East Division and with just one game left on the schedule, there should be opportunity for that.  Just hope that no one else falls to the injury bug.

Posted by The Peerless at 3:29 PM No comments: