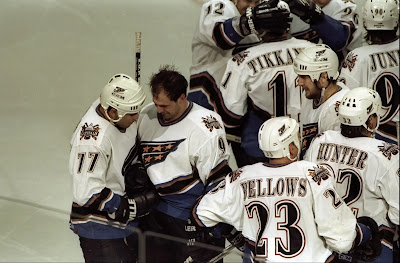 The Washington Capitals spent many of their first 23 seasons fighting futility.  There was that of the expansion squad that failed to win as many as 30 games in a season or make the playoffs over their first eight seasons.  There was that of the Capitals who reached the postseason in 14 of the next 15 seasons, but reaching as far as the third round of the playoffs only once, in 1990 when they were swept by the Boston Bruins.

And then came 1998.  Caps fans will remember that as the first time that the Capitals reached the Stanley Cup finals, propelled there on an overtime goal by Joe Juneau in overtime of Game 6 of the Eastern Conference finals against the Buffalo Sabres.

However, we might ask ourselves if there even would have been a Game 6 but for an outcome earlier in the series.  Remember that the schedule had the Caps hosting Games 1 and 2 at MCI Center (now Capital One Arena).  They fell flat in the opener, Dominik Hasek pitching a 19-save shutout in a 2-0 Sabres win.  A loss in Game 2 would have sent the teams to Buffalo where the Sabres could have ended the series almost before it started.

For the Caps, losing Game 1 on home ice in a playoff series was a rather uncommon occurrence.  It was only the third time in 13 instances of opening a playoff series on home ice that they lost.  What they had never done, though, was lose both Games 1 and 2 on home ice.  But that is what they faced when they took the ice to host the Sabres on May 25, 1998.  It was an even bigger game for the special fan who joined the crowd, the President of the United States.  He and the crowd would be treated to one of the more controversial games in Capitals postseason history.

When the first period was winding down with neither team scoring, it looked as if it might be a replay of Game 1 in which the teams went to the first intermission scoreless.  But in the final minute, the Caps failed to clear the puck out of their own end.  Dixon Ward kept the puck in just inside the offensive blue line, spun, and fired a shot at the Caps’ net.  The puck was muffled in the slot, where it ended up on the stick of Vaclav Varada.  Joe Reekie could not sweep the puck away from Varada, and the Buffalo forward snapped a shot past the blocker of goalie Olaf Kolzig to give Buffalo a 1-0 lead with 58 seconds left in the period.

The teams skated through almost the entire middle period without another goal scored, a matter than no doubt added to the frustration the Capitals were having trying to solve Hasek.  And that brings us to the first, but by no means the last controversial moment of the game.  Caps defenseman Phil Housley collected the puck at the top of the right wing circle with the clock ticking under a minute to play in the period.  He snapped a shot at the Sabres’ net where Peter Bondra was lurking.  Fending off defenseman Bob Boughner, Bondra got his stick on the puck as it was passing through, popping it up and over Hasek’s glove.  The puck settled over the goal line to tie the game, but there were two questions about the play.  One, was Bondra’s deflection a high stick violation, over the height of the crossbar when he made contact with the puck?  Two, did Bondra interfere with Hasek in the crease and prevent Hasek from cleanly playing the shot?  You be the judge…

The goal was counted, and the Caps tied the game, 1-1, heading into the second intermission.

Washington took a 2-1 lead in the 15th minute of the third period on a goal by Joe Juneau, but it was what happened a minute after the goal that was controversial, from the Sabres’ point of view, and entertaining, from the perspective of the Caps fan.

With the puck sliding down the boards into the Sabres’ end, Hasek moved out to play it at the edge of the faceoff circle along the boards.  Peter Bondra challenged Hasek, who tried to chip the puck back, past Bondra and off the boards to Jason Wooley trailing the play.  He managed to do so, just as Bondra collided with him in the corner.  Hasek, incensed at being run over, hurled his blocker at Bondra.  Play stopped shortly thereafter as players came together at center ice to discuss the matter.

Buffalo got a measure of revenge and put the fear of losing back into the hearts of Caps fans with a power play goal with 57 seconds left to tie the game, the third time in this game that a goal was scored in the final minute of play in a period.  The teams went to overtime with the Caps in jeopardy of going down 0-2 in games on home ice.

It would not take 19 minutes and change in the overtime for the next goal to be scored, though.  Wooley chased down a loose puck behind the Sabres’ net and tried to send it around the corner and up the boards.  Andrei Nikolishin cut off that avenue for the Caps and settled the puck in the corner to Hasek’s left.  Stepping out of the corner, Nikolishin was tripped by Darryl Shannon, but he managed to backhand a centering feed to Todd Krygier in the slot.  Krygier fired low on Hasek’s glove side and found the back of the net for the game-winner.

That play was not without its own last bit of controversy, though.  Wooley went back to retrieve the puck behind the net after Hasek let it go, thinking there was an icing call that was going to be made against the Caps on the play.  The call was never made, play continued, and the Caps had their series-tying game-winning goal moments later.

It would be the first of three overtime wins for the Caps in that Eastern Conference semi-final series against the Sabres, the Caps also needing overtime in Game 3 in Buffalo before winning the series on Juneau’s overtime goal in Game 6 of the series to send the Caps to their first Stanley Cup final.  But Joe Juneau’s legendary heroics in that Game 6 might never have come to pass without Todd Krygier putting an exclamation point on one of the most bizarre games in Capitals playoff history.
Posted by The Peerless at 6:00 PM No comments: