Three weeks in, three winning weeks.  Week 3 started poorly against an archrival, but it ended with two games of the sort that condition a club to dealing with tough circumstances, when goals do not flow off their sticks like honey.  It made for what would be a sweet week, though. 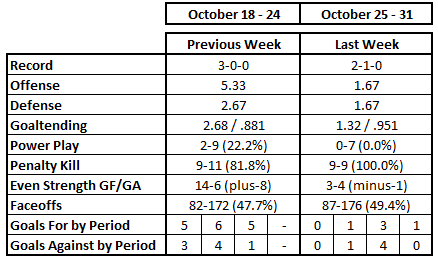 Beating the Pittsburgh Penguins, even at home, had become an infrequent experience in recent years.  Going into Wednesday night’s game against the Pens, the Caps were 3-8-1 in their last dozen meetings, 1-4-0 at home.  The Caps broke open a scoreless tie early in the third period, but gave the lead back less than a minute later before dropping a 3-1 decision.  The Caps were better about holding leads in their other two games of the week.  They held on after taking a 2-0 lead against the Columbus Blue Jackets to win , 2-1, then they just waited until the very last second to take a lead, beating the Florida Panthers, 2-1, in overtime.

Goals were hard to come by in Week 3.  It was not completely unusual to finish a week with five goals in three games; the last time the Caps scored 5-in-3 was in Games 68-70 last season (they lost to the New York Rangers and Dallas Stars, beat the Boston Bruins).  However, it was an unexpected result, given that the Caps finished Week 2 with the top scoring offense in the league.  The Caps got only one goal – one point, in fact – from a forward not in their top-six, although that goal by Jay Beagle was scored playing with Alex Ovechkin and Justin Williams.  So, you could say the bottom six was shut out for the week.  There were no goals from defensemen; the three points for the week being assists – two from Karl Alzner, one from Dmitry Orlov.

As much as the offense struggled for the week, the defense had a pretty good effort.  At the top end, they allowed only 82 shots (including one empty-netter), 27.3 shots per game.  It was actually a bit higher average than the Caps’ average through two weeks.  Nevertheless, Washington finished Week 3 having allowed the fewest shots on goal per game in the league (25.1).

It was every bit as good in the possession numbers.  The Caps dominated at 5-on-5, finishing all three games over 55 percent Corsi-for and going 57.3 percent for the week.  Their Fenwick numbers were almost as good, topping 50 percent  in each of the three games and going 55.2 percent for the week.  It was a similar story in close score situations, 56.0 Corsi-for and 54.2 percent Fenwick-for in close score situations at 5-on-5 (all numbers from war-on-ice.com).

Week 2 was not a very good week for the netminders.  Week 3 was another matter.  Braden Holtby and Philipp Grubauer combined to allow only four goals on 81 shots for the week.  It might have been a better week if the save percentages had not been eroded as games went on.  The first period save percentage was 1.000 for the week (34-for-34).  The second period was not much worse (.950 on 19-for-20), but the third period save percentage of .885 (23-for-26) contributed to the lone loss for the week and some anxious moments against Columbus.  One thing that Caps goaltenders are benefitting from is low shot volumes.  At the end of Week 3, among 33 goalies playing at least 200 5-on-5 minutes, Braden Holtby faced the fewest shots per 60 minutes (23.04, to St. Louis’ Brian Elliott with 20.41; numbers from war-on-ice.com).

Week 3 was an unusual week.  It was the first time that the Caps were blanked on more than five power play chances for a week since Week 16 of the 2013-2014 season.  It was a streak of 39 weeks without going without a power play goal on more than five chances.  It was not so much the efficiency that affected the result.  The Caps recorded 12 shots on the man advantage in 13:59 of power play time (0.86 shots per minute).  Not great, but not all that bad, either.  It was not even so much the “who” got those shots.  Alex Ovechkin had four power play shots for the week; T.J. Oshie had three.  One might point to Ovechkin missing the net on four power play shots against Columbus, but in the end, perhaps it was just one of those weeks.

You would think a 9-for-9 week would be cause for celebration, and at the most important level – no goals – it is.  It was the first time since Week 20 last season that the Caps shut out opponents on five or more power plays.  There were, however, a lot of shots – 17 of them in 16:13 of shorthanded ice time (1.05 per minute).  A lot of that was the performance against the Florida Panthers to close the week.  Perhaps it was a product of playing on back-to-back nights, but eight shots against in 5:58 of shorthanded ice time.  It made Philipp Grubauer the best penalty killer of the night for the Caps.  But these things are team efforts, and at the end of Week 3, having the league’s sixth-ranked penalty kill cannot be considered a bad thing.

It was a very quiet week, for and against, at five-on-five.  If there was a concern, it was the Caps inability to score early at full strength.  They did not score a five-on-five goal in the first half of any game for the week.  It would be nice if that was balanced by dominating five-on-five play late, but that was not the case, either.  It was a woeful week shooting the puck at fives.  The Caps were 3-for-73 over the three games (4.1 percent).  Consider it the pendulum swinging back in the other direction after a couple of weeks of very good five-on-five play; the Caps finished the week still ranked fifth in their goals-for/goals-against ratio.

The Caps finished the week one draw under 50 percent, but it masked the differences at the ends of the rink.  As one might expect with such a low-scoring week, the Caps struggled a bit in the offensive zone and did better in the defensive end.  That was certainly true, Washington managing only 45.0 percent wins in the offensive end for the week.  Jay Beagle going 9-for-16 could not offset Nicklas Backsttrom going 6-for-16 and Evgeny Kuznetsov going 7-for-15 in the offensive zone.  In the defensive end, the Caps were 55.9 percent, Backstrom (60.9 percent) and Kuznetsov (70.0 percent) having good weeks to offset Beagle’s struggles (46.7 percent). It was a case of battling close early, giving little in the middle, and holding on at the end as far as the goals by period are concerned.  The Caps failed to score in any first period in Week 3, but they held opponents off the score sheet, too.  It was even again in the second period, the Caps scoring a goal against Columbus in the middle game of the week, allowing one to Florida in the last game of the week.  As it is, the Caps finished the week having scored more third period goals for the season (16) than every other team in the league except Montreal (17), and they had a positive goal differential in all three periods.  Their plus-6 goal differential in the third period is better than all but the New York Islanders and St. Louis Blues (both plus-7).

The Caps closed Week 3 with an 8-2-0 record, matching their best ten-game start in franchise history, set in 1991-1992 and tied in 2011-2012.  They finished the week on top of the Metropolitan Division, holding a game in hand on each of the four teams behind them in the standings.  They finished the week in second place in the Eastern Conference, four points behind the Montreal Canadiens, but holding two games in hand on the Habs.  They are currently fourth in the league standings, holding at least a game in hand on each of the three teams in front of them – Montreal, Dallas Stars, St. Louis Blues.  You don’t have to put a blanket over the top seven teams in the league standings at the moment; you might be able to fit them on a postage stamp.  Four points separate those seven teams, and the Caps are firmly in that group (the Caps and Nashville Predators have played the fewest games in that group: 10).

It will not get easier in Week 4, though.  The Caps start the week visiting the New York Rangers, currently a tie-breaker behind the Caps for the Metro Division lead.  Then they host the Boston Bruins, a club that has been surprisingly good thus far (6-3-1), leading the league in scoring offense (3.90 goals/game).  They might catch a break finishing the week against the Toronto Maple Leafs (1-7-2), but that might be a team past being fed up with the level of their play.  That’s why they play the games.

Posted by The Peerless at 10:33 AM No comments: