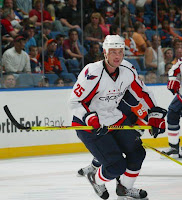 We’re getting close to the end, and the next look is at…

Fearless’ Take: Let’s get this out of the way right at the top. Kozlov is Kozlov. He is a guy who is going to be a consistent goal scorer. In the last eight seasons he has played at least 60 games, he’s scored 16-17-16-17-22-12-25-16 goals. In eight of his last nine seasons, he’s put up between 0.54 and 0.88 points per game. He’s generally had 5-7 power play goals per year (last year he had two). Whether one thinks Kozlov does or does not have the potential to score more than what he has, he is 33 years old with more than 800 games of NHL experience. He’s going to be a good bet to score somewhere in the high teens in goals and get about 50 points. He’s going to get those goals playing on the right side of the top line with Nicklas Backstrom and Alex Ovechkin. If anything, Kozlov looked like a steadying influence for the early-20-somethings on that top line. After Bruce Boudreau took over, Kozlov didn’t have a point streak of more than four games (three times) and didn’t have a scoreless streak of more than three games (five times). He had only ten “minus” games in the last 61 under Boudreau, and never did he have consecutive “minus” games. There might be question marks here and there on the roster over what to expect, but Kozlov shouldn’t be among them.

Cheerless’ Take: The most lethal shooter on the planet to occupy a defense, a gifted playmaking (even if rookie) centerman, and Kozlov scored nine fewer goals than he did on Long Island in 2006-2007? Yes, he had 12 more assists than in the previous season, but wouldn’t you expect that? There isn’t anything about his game that really merits complaining about, but by the same token, it’s hard to get excited about anything he’s bringing in his game, too. Well, the last time he was in the walk year of his contract (2006-2007), he had a career year in goals (25). This is a walk year…we’ll see.

The Peerless’ Take: Some guys seem to be magnets for fan frustration. On the Caps, Jeff Schultz is such a player (he isn’t physical enough); Viktor Kozlov is another. The Peerless is not exactly sure why. One could reasonably argue (we did last year, so maybe it’s not reasonable) that Kozlov was a 30-plus goal scorer in waiting. But, he’s not. And that’s not the end of the world. He is consistent, and on a young team, that’s still a plus. He’ll be among the team leaders in most of the obvious statistics – he was fifth in goals last year, third in assists, fourth in total points, tied for first in plus-minus, fourth among forwards in average ice time. Where he might slip is in power play ice time. He was fifth among forwards who played the entire year in DC. Sergei Fedorov is likely to get a fair amount of man-advantage ice time, and Chris Clark might get some as a traffic creator. If Tomas Fleischmann shows improvement in his finishing ability, he could eat into Kozlov’s power play ice time as well. But somehow, some way, Kozlov will find himself at the end of the year somewhere close to his career averages.

Fearless’ Take: After suffering 191 games in Columbus over almost three seasons, looking as if he was going through the motions on the last lap of his career, he was sprung loose to join a bunch of frisky Russians and an otherwise young group with promise. He didn’t look like an old man in the 18 games he dressed for the Caps after the trading deadline. He did not put up big numbers (2-9-11, -2) in those 18 games, but he didn’t have to be the big, go-to guy. He won’t have to play that role on this team, either. He’ll probably get work to start the year centering Alexander Semin and, it would seem, Brooks Laich. It took Semin a while to get accustomed to Fedorov late last year, but scored four goals in the last six regular season games, all of which which included an assist from Fedorov. This could be as intriguing a pairing as the Backstrom-Ovechkin pair on the top line.

Cheerless’ Take: 83-65-44-42-41. That’s the last five seasons’ worth of points for Fedorov. Call it the effect of playing on bad teams (the last four years were on teams that finished below .500), but that’s not a trend you want to see, even if it is part of the hall-of-famer to be’s career winding down. And, in the last three seasons, he’s missed a total of 38 games (in the previous six seasons he missed a total of 31 games). The dip in goal-scoring Fedorov has experienced in recent years isn’t so much a function of his shot-taking as it is his shot-making. From the 1998-1999 through the 2003-2004 season, Fedorov scored on fewer than ten percent of his shots only once and was 11.7 percent overall. Since then, he has been over ten percent once in three years and was 9.1 percent overall. Is he, at this point in his career, a second line center over the long haul of 82 games?

The Peerless’ Take: The Capitals have, by their franchise standards, remarkable depth at forward in terms of scoring ability. That means Fedorov doesn’t have to be the point-plus-per-game player he was for more than a decade in Detroit. The Caps could have half a dozen players with more than 50 points this year (they had four last year), and Fedorov figures to be one of them. Something to watch, based on recent history, is that Fedorov has been a bit of a power play specialist. Of his last 29 goals over two seasons, 13 have come with the man advantage (he also has a pair of shorthanded goals). What Fedorov might no longer have in terms of high-end scoring ability, he will make up for in experience (and that which he imparts to the youngsters on the club) and versatility. With the Capitals keeping 22 on their roster – and only six defensemen – Fedorov is what amounts to the “emergency” defenseman, having played that position from time to time in his career. Once Michael Nylander went down last year, the Caps lacked an effective second line center. Specifically, they lacked a credible playmaker there to take more advantage of Alexander Semin’s finishing skills. That should not be a problem this season.

Next up…
Michael Nylander
Last Year: 40 games, 11-26-37, -19
Career average (per-82 games): 19-43-62, +7
Feerless’ Take: For a guy who played only half a season – and a good portion of that with an injury that eventually sidelined him – he scored at a pace that justified his signing. The pace he was on (23-53-76) would have exceeded his career averages in goal, assists, and points; and it would have been comparable to his best years, spent with the Rangers. He was especially effective on the power play, where his five goals and 13 assists put him on a pace to finish second on the team in goals (10) and tops in assists (27), if projected over a full season. He was on a pace to match the 37 total power play points that Alex Ovechkin had to lead the team. In terms of what Nylander was signed to do, he largely delivered in his abbreviated season.
Cheerless’ Take: The 500-pound gorilla in the room is that other number…-19. If you’re talking about “pace,” cuz, that was a number on a pace for -39. That would have been worst in the league by a country mile (Radek Bonk finished -31). Nylander was -14 at home, which is a stunning number. That “pace” (-29) was almost bad enough to be worst without playing a road game. As it was, he was next to last among all NHLers in home plus-minus (Matt Stajan was -17 in 82 games). You could argue that much of his problem was a byproduct of the torn rotator cuff that would end his season (he played six weeks with the injury and was in a position where he was unable to practice, according to reports), but now he has to come back from that injury.
The Peerless Take: Nylander has shown himself to be a fairly reliable scorer in his career – he has never finished a season with fewer than 50 points in a season in which he played at least 65 games (he’s done that six times). Only once did he score less than 60 points in such a season. What’s more, he has never finished such a season on this minus side of the ledger. Nylander is another “free agent” in that how he fits into the Caps’ scheme of things is a considerable unknown. In 19 games under coach Bruce Boudreau, he was 6-12-18, -11. He had six multi-point games in that stretch. The -11 is a flashing light that indicates “injury.” He was just not able to provide much resistance in the defensive end tending to his responsibilities. His history suggests that will be corrected, if he’s healthy. But it is that 18 points in 19 games that is most intriguing. One school of thought argues that Nylander’s east-west, peel off and set things up style is fundamentally at odds with Boudreau’s north-south, press the issue style. The results suggest that there is a common ground here. What seems as likely as not to affect his numbers is not the lingering effects of the injury as much as the ice time he might get in a crowded group of Capital scoring forwards.
Projected: 17-35-52, -2
Posted by The Peerless at 7:27 PM No comments:

As we head into the 2008-2009 season, we're going to hear that the Pittsburgh Penguins are a favorite to reach the Stanley Cup final, perhaps even to win it all. And in the next breath, many of those same pundits will raise the specter of the season-after swoon, the misfortune that falls upon the Stanley Cup finalist that lost when they take the ice the following year.
Well, is there anything to it? To quote a presidential candidate..."you betcha."
The Peerless looked at the last 25 Stanley Cup runners-up, starting with the Vancouver Canucks (who lost to the New York Islanders in the 1982 final) and ending with the Ottawa Senators (who lost to the Anaheim Ducks in 2007). It is not a pretty picture. Here are the facts, by the numbers...

- 5...the number of runners-up that did not make it to the playoffs in the following year (Los Angeles in 1994, Washington in 1999, Carolina in 2003, Anaheim in 2004, and Edmonton in 2007)
- 12...of the 20 teams that did make the playoffs, the number that failed to move past the first round
- 13...the total number of playoff series won by the 25 teams over the past 25 years
- 76...the total number of games won by the 20 teams that did make the playoffs; 35 of those were won by three teams (15 by Edmonton in 1984, ten each by Boston in 1991 and Detroit in 1996)
- 1...the number of teams over the past 11 years that followed up a finals appearance by winning a playoff series in the following year (Dallas made it to round two in 2001 after losing in the finals in 2000); six other teams making the playoffs failed to win a series
- 8...the number of teams in this group of 25 that finished below .500 the year after they went to the finals
- 2...the number of teams that were swept in the opening round of the playoffs in the year follwing their finals appearance (Chicago in 1993 and Ottawa in 2008)
- 89...the average point total for runners-up in the year after they finished second
- 1...the number of teams that followed up a defeat in the final with a Stanley Cup victory the following year...Edmonton in 1984.
We will not be betting on a Penguin parade in Pittsburgh in 2009.
Posted by The Peerless at 6:38 AM 2 comments: