The Peerless Prognosticator is ON THE AIR!!! -- Game 25: Devils at Capitals, March 9

The Washington Capitals interrupt their road journey of eight games in nine contests with a brief lay-over in Washington to host the New Jersey Devils on Tuesday night.  The Caps completed a 4-1-0 road trip with a 3-1 win over the Flyers in Philadelphia on Sunday, while the Devils come to Washington in the middle game of a three-game road trip and fresh off one of their best performances of the season, a 1-0 shutout win over the Bruins in Boston on Sunday.

The Devils, despite their 8-11-2 record overall, have been a decent road team.  Better than decent, in fact. Their 6-2-1 road record is best, by points percentage, in the East (.722) and is sixth-best in the league overall through Sunday’s games.  Part of that success is the league’s sixth-best scoring offense on the road this season (3.22 goals per game), and that is due in large part to the uncommon balance in scoring for the Devils on the road.  In nine road games, the Devils have goals from 17 different players.

The Devils have not suffered on the defensive side of things on the road, either, their 2.67 goals allowed per road game ranking eighth in the league in scoring defense.  A name one might not associate Kyle Palmieri, a player with more than 20 goals in each of his last three season, with defense, but he has not been on ice for an even strength goal scored against the Devils on the road so far this season in eight games.  He is one of two players in the league to have played at least eight road games and not been on ice for an even strength goal scored against his team (Vegas’ Alex Tuch is the other).  And even though Palmieri’s goal scoring is off overall (four goals in 20 games to date), he has done most of his damage on the road with three goals, seven points, and a plau-8 rating in eight games (1-2-3, minus-9, in 12 home games).  Palmieri is 6-7-13, minus-3, in 24 career games against Washington.

As a team in transition, the Devils have dressed their share of rookies. Six of the 25 skaters to dress for the Devils this season are in that category.  Two have appeared in all 21 games to date.  Of the two, defenseman Ty Smith has received some attention as a potential Calder Trophy finalist.  The other Devil rookie to appear in every game, forward Nathan Bastian, has received somewhat less attention.  Taken with the 41st overall pick (second round) by the Devils in the 2016 Entry Draft, Bastian rose through the developmental ranks, but not without a hiccup along the way.  He spent one more year in Canadian juniors after he was drafted, and then he graduated to the Binghamton Devils in the AHL in 2017-2018.  The following season he spent most of his time in Binghamton, but he did get seven games with the big club to start his NHL career.  Th3e 2019-2020 season was a bit of a setback, Bastian spending the entire season in the AHL.  This season, though, he has been a full-timer with New Jersey, going 2-4-6, plus-3, in 21 games while averaging almost 12 minutes per game in ice time. He started this season in productive fashion, going 1-3-4, plus-4, over his first nine games, but then he suffered a ten-game streak without a point.  He broke that streak with his second career multi-point game (a goal and an assist) in a 6-3 loss to the Rangers last Saturday.  This will be his fourth career appearance against the Caps, and he is looking for his first point. 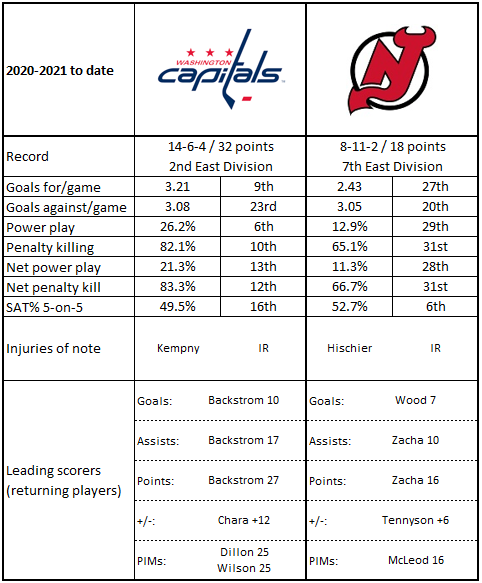 3.  New Jersey has spent only 103:34 in power play ice time this season, third-lowest in the league.  They also have spent the third-lowest amount of ice time killing penalties (98:12).

1.  Washington is tied with Tampa Bay for most second period goals scored on home ice (19).

2.  The Caps are only .500 in win percentage when leading games at home after one period (3-2-1). Only four teams have a worse win percentage.

3.  Washington has only trailed twice after two periods in 14 home games.  They are 1-1-0 in those games, their .500 win percentage tied for third-best in the league.

4.  Only Edmonton and Dallas have more power play goals scored on home ice (14 each) than the Caps (13).  Theirs is still the best home ice power play in the league (44.8 percent).

The Devils have gone through goalies this season – four in 21 games.  Mackenzie Blackwood would appear to be the goalie of the future, but at present he is having his troubles (1-6-0, 3.77, .865 over his last seven games).  Enter Scott Wedgewood.  Wedgewood has played in only six games for the Devils this season, and he has only two wins, but both of those wins are shutouts.  It’s not as if he blacked palookas, either. He stopped al 28 shots he faced in a 2-0 win over the current East Division leading New York Islanders on January 24th, and he stopped all 40 shots he faced in a 1-0 blanking of the Bruins in Boston last Sunday in his most recent appearance.

For someone with as little NHL experience as Wedgewood has, he has traveled quite a bit.  He was a third-round pick of the Devils (84th overall) in a 2010 Entry Draft that was not kind to goalies taken with higher draft picks (the four goalies taken ahead of Wedgewood have combined for 177 NHL games).  He played one season for the Devils, in 2015-2016, before he was traded to the Arizona Coyotes in October 2017 for a fifth-round pick in the 2018 draft.  Three months later he was traded to the Los Angeles Kings with Tobias Rieder for Darcy Kuemper.  Five months later he was a free agent signed by the Buffalo Sabres.  A year later he was a free agent signed by the Tampa Bay Lightning, and finally, in October 2020, he made his way back to the Devils as a free agent.  Five teams (one of them twice) in the space of three years.  But right now, he is the hottest goalie the Devils have.  Wedgewood is 1-0-2, 1.89, .928, in three career games against Washington.

Do you think secondary (or third-level, or even fourth-level) scoring doesn’t matter?  Consider Nic Dowd.  For the most part a fourth line forward, Dowd is not expected to shoulder a heavy scoring burden.  But what he can and does contribute matters; it fills in the blanks.  In three seasons with the Caps, the team is 29-5-2 when Dowd recorded a point (a .833 points percentage) and 59-35-14 when he is held off the score sheet (a .611 points percentage).  This season, those numbers are 3-1-1 when Dowd recorded a point, 11-5-3 when he did not.  He has been stuck in a scoring rut, even for a bottom six contributor, going 1-0-1, minus-3, over his last 14 games.

Where he has been a monster, though, is in faceoffs.  Over his first 14 games this season, he was 82-for-170, a 48.2 percent win mark.  Since then, he is 93-for-145, a 64.1 winning percentage, fifth in the league among 132 players taking at least 50 draws over that period.  His recent performance in this area has propelled him to his career high in faceoff winning percentage to date (55.6 percent overall).  The Caps are 9-3-1 in 13 games in which Dowd won more than 50 percent of his draws, 5-3-3 in games in which he finished under 50 percent on faceoffs.  Dowd also has a knack for being responsible with the puck, at least so far as credited takeaways and giveaways are concerned.  He is in the midst of his fourth consecutive season of takeaways exceeding giveaways (15 takeaways, five giveaways this season to date).  Dowd is 1-3-4, plus-3, in 12 career games against the Devils.

With a two-game rematch with the Flyers in Philadelphia coming up after this game, the obvious danger is in looking past what looks like a weaker team to those future contests.  That would be dangerous.  The Devils compete well on the road, and they are coming off an inspirational win in that shutout of Boston on Sunday.  On the other hand, the Caps have been a successful home team, even if they have not had a game at Capital One Arena since beating Pittsburgh on February 25th.  Still, all things considered, the Caps are deeper and have had success against this team this season (3-0-0), not to mention the Devils’ captain Nico Hischier is on the injured reserve list with a sinus fracture.  There is every reason to think that the Caps will continue their success against the Devils.